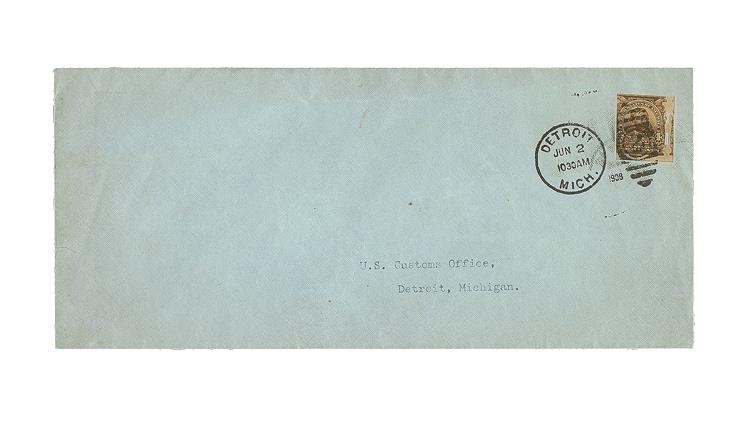 The Oct. 19 Siegel sale of part 2 of the Melvin Getlan collection of United States stamps with vending- and affixing-machine perforations includes the only known commercial use of the rare 1908 4¢ brown Grant stamp with Schermack type III perforations.

A scarce unused entire of the 1876 3¢ red Centennial Exhibition stamped envelope on white paper with a double line under “POSTAGE” will cross the auction block during Siegel’s Oct. 20 sale of part 1 of the Porter W. Venn II collection.
Previous
Next

Collectors who missed out on Robert A. Siegel Auction Galleries’ April 5 sale of part 1 of the Melvin Getlan collection of United States stamps with vending- and affixing-machine perforations will have additional opportunities when Siegel offers part 2 of this stellar collection Oct. 19 in New York City.

Siegel president Scott Trepel, in the introduction to the catalog for part 1 of the Getlan collection, emphasizes the close connection between these fascinating stamps and the development of labor-saving practices.

“The history of VAMPs [vending- and affixing-machine perfs] is closely tied to the development of mass marketing and mechanized everything at the start of the 20th century,” Trepel said.

“Coin-operated machines delivered products to the public, and machine inventions were designed to automate and speed up a wide range of labor processes. To understand how mechanization played a role in philately, it is helpful to separate the machines’ functions of vending and affixing.”

Siegel International director Charles Shreve, in the introduction to the catalog for part 1 of the Venn collection, provides an overview of Venn’s accomplishment.

“The collection of postal stationery assembled by Porter W. Venn II is beyond doubt the finest and most comprehensive collection ever formed,” Shreve said.

“Viewed in its entirety — the pun is intentional, since Porter preferred complete entires [intact postal stationery items] over cut squares — the collection is an extraordinary achievement.

“Never content to own just one example of a Scott-listed entire, Porter followed the United Postal Stationery Society’s specialized catalogue of stationery. He sought to acquire every die, knife, envelope size and watermark variety, many of which are much rarer than the ordinary types on which the Scott listings are based.”

One of the highlights of Siegel’s sale of part 2 of the Getlan collection is a 1908 cover mailed locally in Detroit, Mich., that stands as the only recorded commercial use of the imperforate 1908 4¢ brown Grant coil stamp with Schermack type III perforations (Scott 314A).

In its catalog description of the cover, Siegel notes that it is one of only four recorded covers franked with this rare imperforate stamp.

Siegel also provides a summary of the origins of Scott 314A:

“In May 1908, a supply of 25 sheets (400 stamps per sheet) of the 4¢ 1902 Issue, without perforations, was delivered to the Schermack Mailing Machine Co. in Detroit. The entire supply was cut into coils with Schermack Type III perforations, designed for the firm’s patented affixing machine and delivered to the Winfield Printing Co. for use on mass mailings of advertising material. Approximately 6,000 were used on a mailing for Hamilton Carhartt (a manufacturer of durable work clothes that still exists today), and almost all of the 4,000 balance were used on a mailing for Burroughs Adding Machine Co.”

Bidders wanting to learn more about the cover in this sale should read Ken Lawrence’s detailed report in the May 1994 issue of the American Philatelist.

Siegel describes the stamp on the cover as having “intact perforations at right including part of adjoining stamp” and notes that the envelope has “two trivial edge tears” that do not affect the stamp.

Scott 314A is valued on cover at $140,000 in the Scott Specialized Catalogue of United States Stamps and Covers.

Siegel lists this commercial cover franked with an imperforate 1908 4¢ Grant coil stamp with Schermack type III perforations with an estimate of $75,000 to $100,000. Accompanying the cover are 1957 and 1996 expertizing certificates from the Philatelic Foundation.

One of the standout items in Siegel’s Oct. 20 auction of part 1 of the Venn collection of U.S. postal stationery is one of four recorded entires of the 1876 3¢ red Centennial Exhibition stamped envelope on white paper with a double line under the “POSTAGE” banner at the top of the indicium (Scott U220/United Postal Stationery Society 645).

Siegel describes this important envelope as “one of the most easily recognized and desirable of all postal stationery rarities.”

According to Siegel, “The 1876 Centennial Exhibition envelopes were the first commemorative envelopes ever issued.”

“Die 72 comes in two sub-types and the printing in Red (Ty. 2) is one of the great rarities of postal stationery collecting.”

Scott U220 was not regularly issued and is not known used. The Scott U.S. Specialized catalog values an entire at $42,500 and a cut square at $27,500. Both values are italicized to indicate items that do not trade frequently in the philatelic marketplace.

Siegel lists this entire of the 1876 3¢ red Centennial Exhibition stamped envelope on white paper with a double line under “POSTAGE” at the Scott U.S. Specialized catalog value of $42,500.

Siegel has prepared detailed catalogs for the sales of part 2 of the Getlan collection and part 1 of the Venn collection. Full details of the auctions, including downloadable versions of the catalogs and online bidding options, are available on the Siegel website.