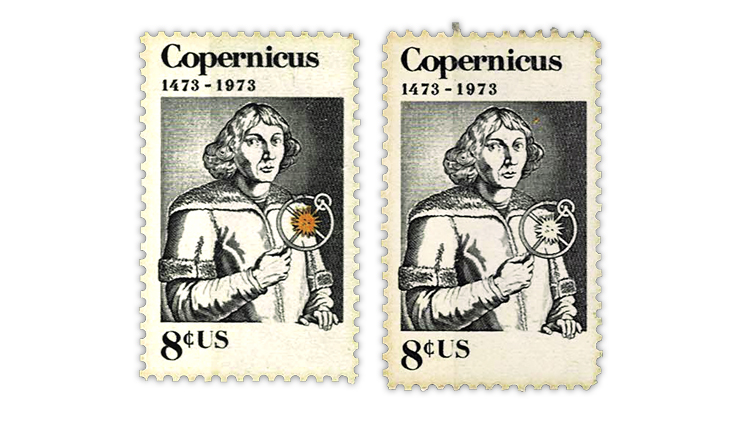 Figure 1. The 1973 8¢ Copernicus commemorative was printed in two colors, engraved black for the image of Copernicus and lithographed yellow orange for the sun. A normal example of the stamp is shown at left, and one that has been altered to remove the ye 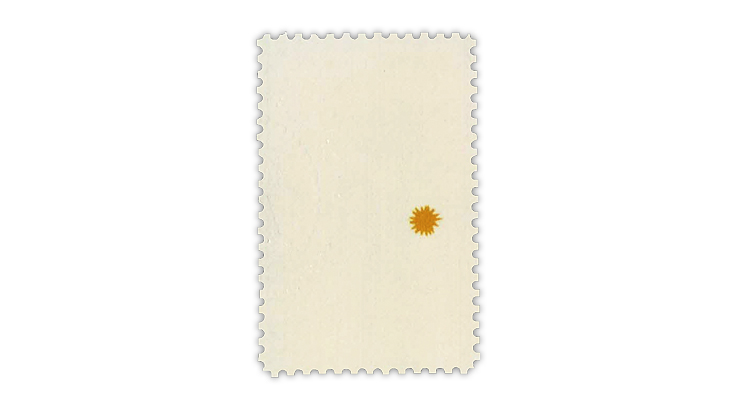 Figure 2. The 1973 8¢ Copernicus stamp is known with the black omitted, but for a stamp to be considered an error there cannot be even a trace of the black ink. Shown here is an image from a 1992 expertization certificate that says that the submitted stam
Previous
Next

In 1973 the United States Postal Service issued an 8¢ stamp honoring the 500th birth anniversary of Polish astronomer and mathematician Nicolaus Copernicus (Scott 1488). He published his theory that the Earth revolved around the sun rather than the other way around in 1543, just a few months before his death.

The design of the 8¢ stamp shows Copernicus holding a representation of the sun as the central feature of the universe. The illustration of Copernicus was engraved in black ink, while the sun was printed by lithography in yellow orange, setting up a situation where one part of the printing could be missed or inverted. The latter didn’t happen, but shortly after the stamps were issued, reports surfaced of examples with the sun omitted.

At the time, Jacques C. Schiff Jr. (1931-2017) ran an auction firm that specialized in errors, so it was no surprise that the new missing-sun error migrated to him to sell. Its first appearance in the form of a plate block realized what Schiff called “the tidy sum” of $1,760.

However, the plate block was purchased contingent upon it receiving a good certificate of authenticity. Schiff thought the best place to rule on the legitimacy of the error was the Bureau of Engraving and Printing, where the stamp had been printed.

He sent it in, the BEP looked at it and pronounced it genuine.

In the meantime, his office staff, as a matter of curiosity, experimented with normal examples of the stamp to see if they could remove the sun without damaging the stamp. They succeeded.

Usually there is telltale damage to the tagging and/or the gum when a color is removed from a stamp. But that was not the case in these experiments.

Schiff could have accepted the BEP’s opinion, as certainly the buyer would. But Schiff was always as concerned with legitimacy as he was with his livelihood.

So, he took the unusual step of returning the original find to the BEP together with his experimental errors and asked it to revisit its opinion.

When the printing experts at the BEP took another look, they were surprised to find that indeed the original find was not genuine. Here, excerpted from the BEP’s opinion, is their reasoning:

“To determine if the stamps you submitted were altered we decided to use a non-destructive infrared spectrophotometric technique. The purpose of using this technique was to determine if the vehicle from the offset ink remained on the stamp. To suitably conduct these experiments we obtained the material used to formulate the vehicle on the offset portion of the Copernicus stamps.

“This technique was then applied to the area where the orange offset impression should be on the upper-right stamp of the submitted plate block and to a portion of the selvage beneath the lower-right stamp where the phosphor tagging is present.

“The spectra that were obtained show that the offset vehicle is definitely present. Also, the sample area on the stamp that was presented to the beam covered the entire area inside the circle of the scepter and darkening only occurred where the offset impression should be. Further, no darkening was observed on the selvage where the other spectrum was made.

“Based on the results of these analyses we are of the opinion that the plate block of Copernicus stamps that you submitted were printed with the orange offset color and were altered after they left this Bureau.”

The letter is dated Nov. 14, 1973, and signed by Robert M. Williams, chief of the Office of Research and Technical Services.

In plain English, the yellow orange ink of the sun was a combination of a substance such as oil or water (the “offset vehicle” mentioned in the letter), with which the pigment is mixed so it can be applied to the paper. If the substance was present as was the case with the plate block submitted, then the pigment had been present when the stamps were printed.

Figure 1 shows a normal example of the Copernicus stamp and one that has been altered to remove the yellow orange ink.

Despite the fact that there are faked stamps missing the yellow orange, there were subsequently two panes of 50 found that have been certified as genuine missing colors. The error is listed in Scott catalogs as 1488a.

In the Scott Catalogue of Errors on U.S. Postage Stamps (also known as the Datz catalog for its original author, Stephen R. Datz), the listing has an expanded note that reads: “Caution. Extremely dangerous fakes, including color changelings, exist. Genuine examples of this error each have an APS [American Philatelic Society] certificate. Expert certificates are absolutely essential. Examples without certificates should be avoided.”

In the continuing the series of stamps that are not what they seem, I want to point out that there are also genuine errors of the Copernicus stamp with all of the intaglio black missing (Scott 1488b). However, this error can only be certified when there is not even a smidgen of black ink. As often as not, submitted examples are not the error.

Shown in Figure 2 is an image from a 1992 certificate for one such patient (a stamp submitted for expertization). As stunning as the picture on the certificate looks, the opinion states: “United States, Scott No. 1488 freak print with just traces of black specks showing, unused, full original gum, genuine in all respects.”

The black-omitted error has no warning note in Scott or Datz, but it is equally warranted that a good certificate must be required before buying Scott 1488b.