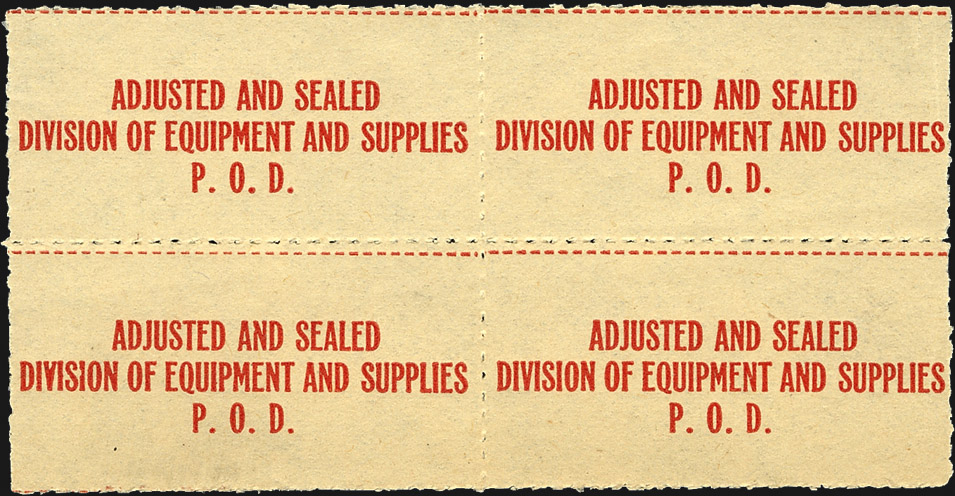 Thanks to former post office staffers, we now know that these small labels were used to indicate that post office scales had been recalibrated. 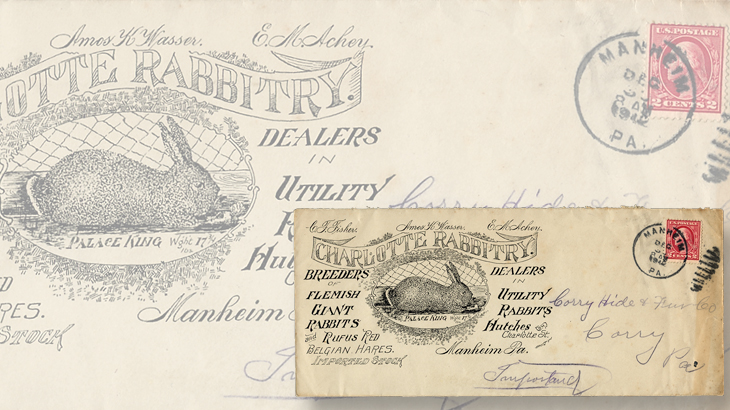 The Charlotte Rabbitry noted on this 1912 advertising cover is located in Pennsylvania, not North Carolina as the name might suggest. The cover was bought with the intention of enticing a 6-year-old granddaughter into the hobby.
Previous
Next

Grandchildren are wonderful, but it can be daunting explaining to a 6-year-old why you collect stamps and old envelopes. So on occasion, I buy a stamp or cover that I wouldn’t normally collect, just because it will appeal to a youngster.

Such a cover is the “Charlotte Rabbitry” advertising cover. In this case, Charlotte refers not to the city in North Carolina, but to Charlotte Street in Manheim, Pa., where the rabbitry was located.

The cover was sent from Manheim in 1912, and is  dominated by the illustration of the 17¾-pound Flemish giant rabbit, named Palace King.

Flemish giant rabbits originated in Flanders, near Ghent, Belgium. Their exact date of origin is not known, but some sources claim it was as early as the 16th century. Flemish giants were exported to America in the early 1890s to help improve the size of meat rabbits.

This breed received little attention until about 1910, when it started appearing at small livestock shows throughout the country.

Because of their size and docile personality, which makes them suitable as pets, these rabbits remain popular. These days it is not unusual to see a 22-pound Flemish giant.

But all that technical stuff aside, my 6-year-old granddaughter in Southern California thought she’d like to have the cover. I’m hoping it is an investment in the next generation of philatelists.

Linn’s readers collectively have a fabulous base of philatelic knowledge, and have proved it again with responses regarding the small labels that were first illustrated in U.S. Stamp Notes it the April 6 issue of Linn’s.

Inscribed on the labels is “Adjusted and Sealed. Division of Equipment and Supplies, P.O.D.” Given that “POD,” probably standing for “Post Office Department,” made these labels highly likely to have a post office function, I asked what it might be.

Two from former United States Postal Service staffers are especially useful, and I’ll quote both in part so as not to duplicate.

Atherstone wrote, “The ‘Adjusted and Sealed’ labels were used on postal scales. Before the advent of electronic and digital scales, it was necessary to periodically adjust the weight drivers/balance the scales for accuracy.

“A designated postal employee would make unannounced visits to postal facilities and with the use of ‘official’ weights would check all parcel and letter scales in the buildings. A balanced scale would then be sealed and labeled, with the inspector placing his initials and the date on the label. ...

“USPS also had similar labels, only in blue and white, with the USPS logo on it. This is one of those jobs that was eliminated through the advent of computers.”

Setwyn wrote, “Each post office had a small set of weights to check whether the scales were accurate, and if not the division of equipment and supplies was contacted to send out a mechanic. Balance scales were little trouble, but spring scales needed occasional attention. ... ”

So, now I wonder whether the USPS version of these seals resides in any collections? If a reader can report on an example in philatelic captivity, it might be interesting to illustrate the two versions together.