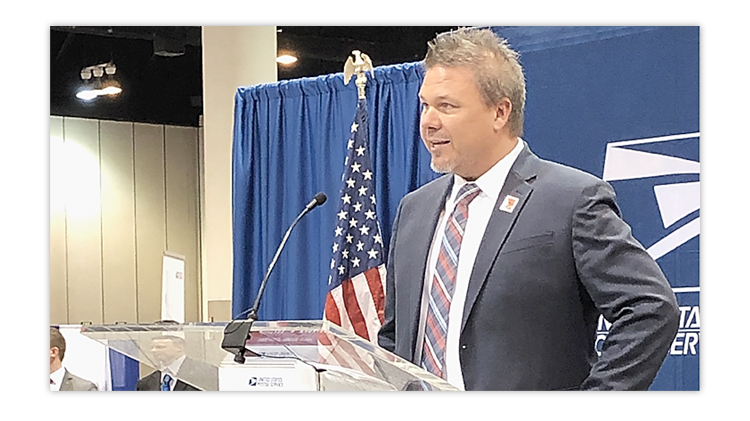 William J. Gicker is the new director of stamp services for the United States Postal Service. Gicker had been acting director of the stamp program since Feb. 1, 2019.

The long-expected promotion of William J. Gicker Jr. to stamp services director for the United States Postal Service was announced June 26 by the agency’s vice president of marketing.

Gicker, who had been acting director of the stamp program since Feb. 1, 2019, has spent his entire career in the stamp services office.

“His experience has provided him with a deep understanding of every aspect of the stamp development process, from stamp subject submission and selection through national distribution, sales, marketing and fulfillment,” said vice president Steven W. Monteith in announcing the selection.

According to Monteith, Gicker was credited with managing development and quality control of “more than 700 stamp issuances and 1,900 stamp designs” since he joined USPS in 1998.

As director of stamp services, Gicker will be in charge of the direction and oversight of “all aspects of the  Postal Service’s stamp program,” Monteith said.

Gicker, who was previously creative director and manager of stamp development for the USPS, was named acting director when Mary-Anne Penner, the previous director, retired Jan. 31, 2019.

“I am looking forward to the challenge of keeping America’s stamp program relevant and engaging,” Gicker told Linn’s after his appointment was announced.

“Awareness has always been our biggest challenge and I look forward to expanding awareness of the U.S stamp program through creative outreach and design,” he said.

“The program may be almost 250 years old, but it can still be fresh, appealing and portray the best of America.”