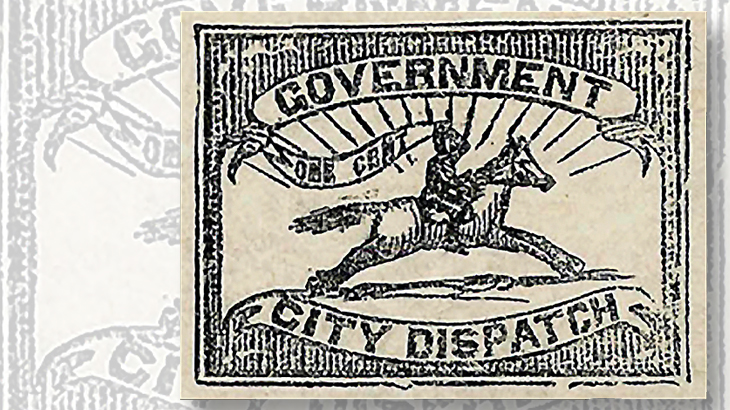 The 1857 1¢ black Mounted Letter Carrier stamp of Baltimore, Md., is a good buy in used condition at the Scott Specialized Catalogue of United States Stamps and Covers value of $50.

City carrier department stamps were used to show payment or prepayment of the fee for city delivery of letters. At the time of their use, postage stamps only paid for delivery from post office to post office, so an additional fee was charged for delivery within the city.

There are many ways to collect city carrier stamps. Probably the most popular is by the city of issue.

The denomination “One Cent” appears in the banner streaming from the rider’s head. City carrier stamps often featured fairly utilitarian designs, so the design of these stamps is one of the more appealing ones.

The 2017 Scott Specialized Catalogue of United States Stamps and Covers values the 1¢ black stamp at $50 in used condition, and the 1¢ red stamp at $90 in used condition. Undamaged four-margin stamps without faults are a good buy at Scott catalog value. Stamps with a manuscript cancellation of the carrier’s initials bring a premium.

Beware of forgeries, which generally have a cleaner, clearer impression of the design than the genuine stamps.