Get on good terms with the language of stamp collecting 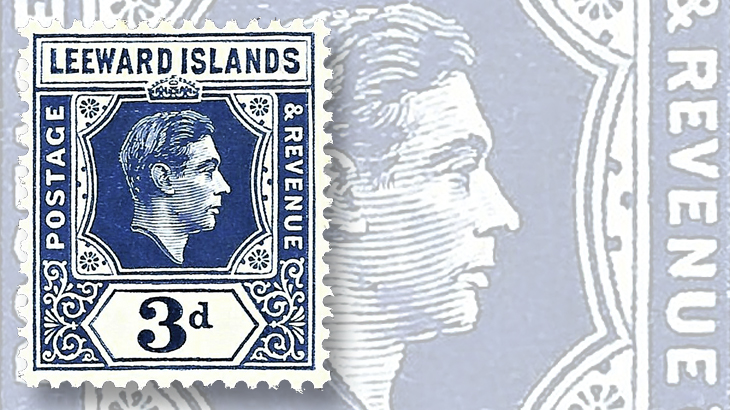 Great Britain was using keytype stamp designs for its possessions into the mid-20th century. King George VI is on this Leeward Islands 3-penny keytype stamp from 1949 (Scott 125). 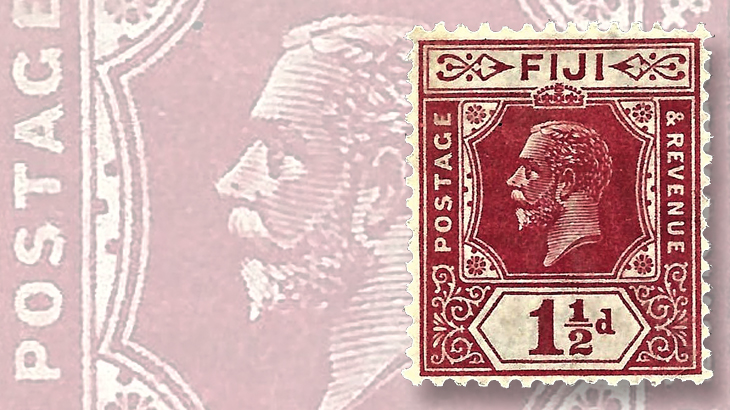 Continuing the succession of British keytypes, a 1927 design depicts King George V, who appears on this 1½d red keytype stamp for Fiji (Scott 97). 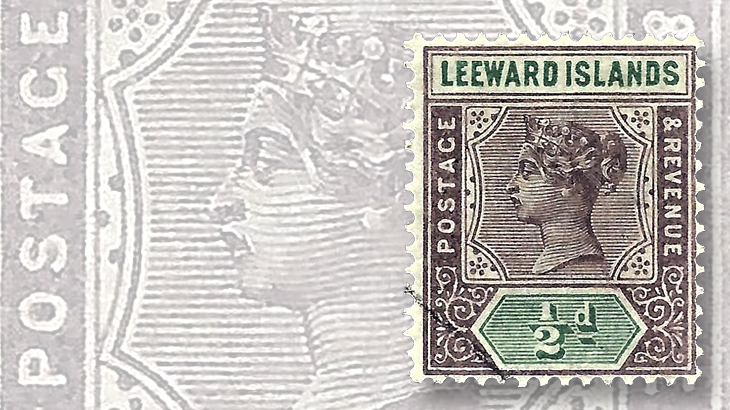 An 1890 keytype design of Great Britain used in many British colonies portrays Queen Victoria. This ½-penny stamp is from Leeward Islands (Scott 1). 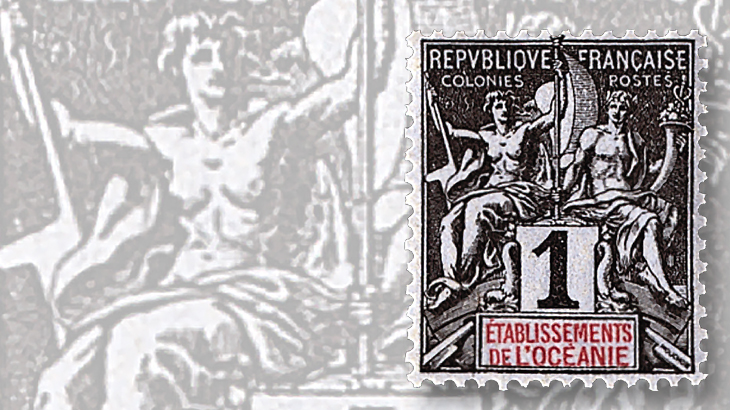 The Peace and Commerce keytype design also was used for the colony of French Oceania in 1892. Many earlier colonial issues of a few other European countries also are keytypes. 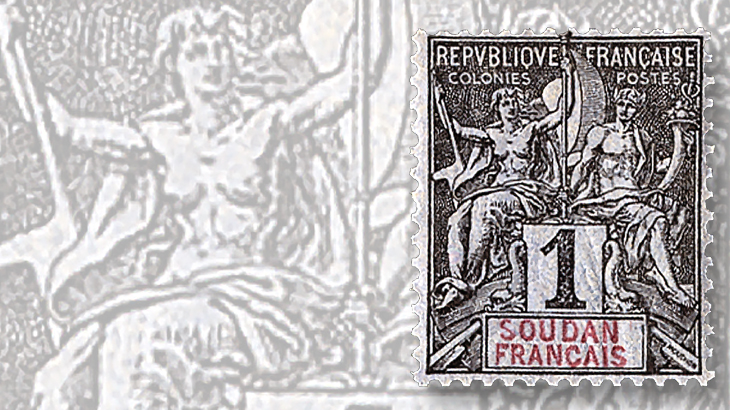 A keytype stamp has a design used in common with more than one country or colony. France’s Peace and Commerce design was amended for use in 1894 to create a stamp series for the colony of French Sudan. 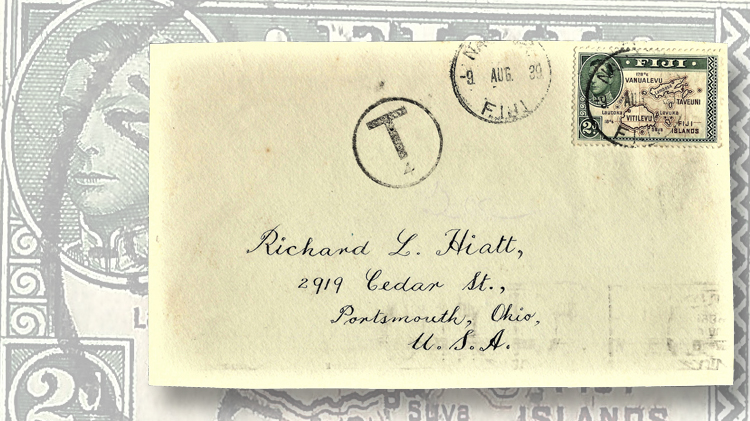 The “T” (for “taxe”) handstamp on this 1939 cover from Fiji to Portsmouth, Ohio, indicates that the affixed 2-penny stamp was insufficient, and more postage is due. 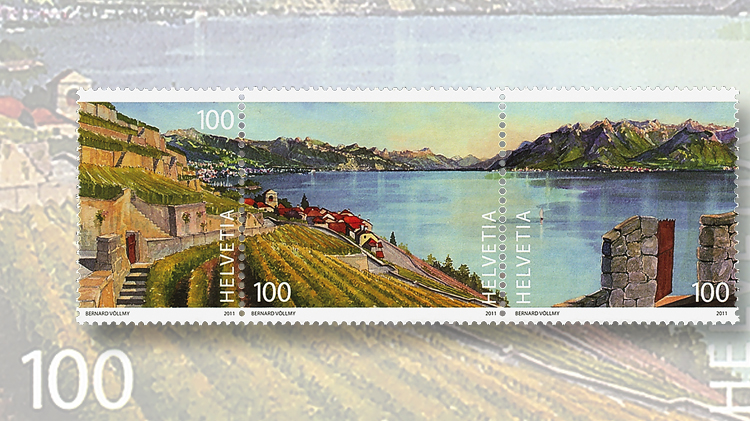 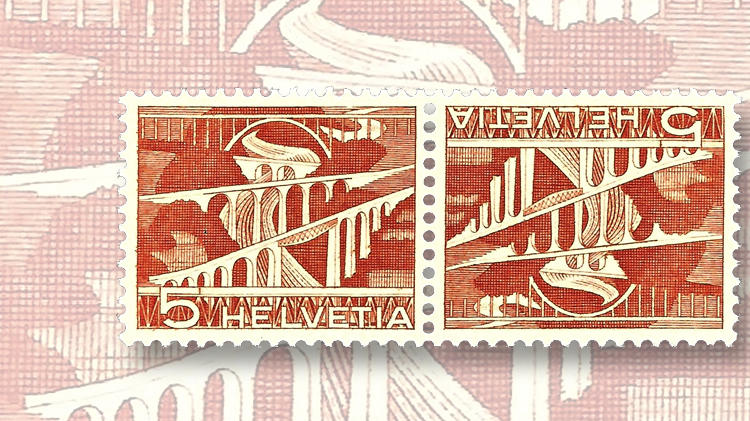 Literally “head-to-tail,” tete-beche refers to two or more stamps joined together, with one stamp inverted in relation to the other(s). These 1949 stamps from Switzerland showing a viaduct are tete-beche (Scott 329a). 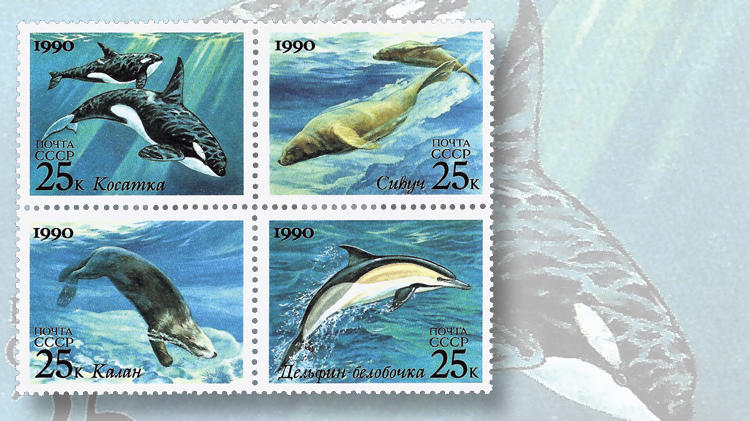 “Se-tenant” refers to stamps of different designs joined together, such as this se-tenant block of Marine Creatures stamps issued by Russia in 1990 (Scott 5933-5936).
Previous
Next

There are terms used in our hobby that sometimes baffle beginner, intermediate, and, on occasion, even advanced stamp collectors. It doesn’t hurt to have a review from time to time.

Let’s look at a few terms that seem to get the most questions.

Se-tenant is usually defined as a French word meaning “joined together,” though Merriam-Webster describes the literal translation as “holding one another.”

Tete-beche correctly translates from French into “head to tail” and refers to two or more stamps joined together with one stamp being inverted in relation to the other(s).

Triptych is a stamp term similar to se-tenant, but involving a se-tenant strip of three related stamps joined together to form one overall design.

“T” The letter “T” as a marking on a mailed cover (an envelope, postcard, or similar item) is an abbreviation for the French word “taxe.” A “T” handstamped on a cover means that not enough postage has been affixed and there is postage due.

A keytype is a basic stamp design used for the stamp issues of two or more postal entities, usually differing in the country name and denomination. Many of the earlier colonial issues of Great Britain, France, Spain, Germany, and Portugal are keytypes.

Often, a keytype stamp will include a designated area where the colony or country name is added to the basic design.

It is worth the effort to learn the language of stamp collecting. Being familiar with terms used in the hobby will help you in communicating with stamp dealers and with other collectors, when you go to a stamp show and look at the exhibits, and when you do research in periodicals and books regarding material in your collection.

There are many sources of information regarding hobby words. A useful glossary is found on the Linn’s Stamp News website.

StampSmarter website offers a multitude of tools for collectors