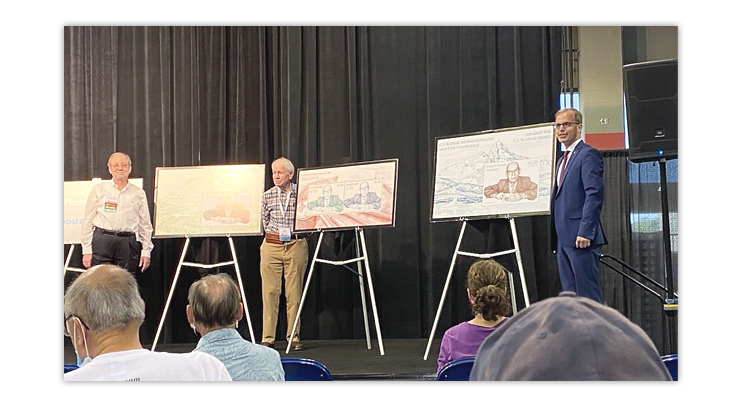 What an amazing adventure it was returning to a national stamp show and seeing so many familiar faces again. The Great American Stamp Show in Illinois is now a recent memory, but from most I talked with at the show it was a success — both financially for a number of dealers and for collectors who found many treasures for themselves.

Some dealers even said they sold about three times as much as they normally would at a stamp show.

See Michael Baadke’s report for additional photographs from the show.

There were many other highlights, too. For me, one of them was the dedication of the joint-issue Faroe Islands, Greenland and Denmark stamp souvenir sheets honoring engraver Czeslaw Slania.

The stamps were designed by master engraver Martin Morck using a photograph of Slania by Wayne Chen. The best-laid plans were in place for both of them, and the Faroe Islands post office, to attend the Slania stamp event, but travel disruptions unfortunately caused all of them to miss it.

The ceremony still took place, and pictured nearby is a photograph of the unveiling of the three souvenir sheets. A special thank-you to Armagan Ozdinc, Morck stamp collector extraordinaire, for helping with the event. Both of us autographed programs for at least a half hour following the ceremony.

I was glad that Ozdinc encouraged the Faroe Islands to ship the souvenir sheets in advance, so at least those were available for collectors to purchase at the show.

Sales were brisk of the sheets and the special folio produced by Faroe Islands that included a numbered black print of only the engraved part of the souvenir sheet.

A thank-you to all that attended, and hopefully we will be able to do something similar again in the future.