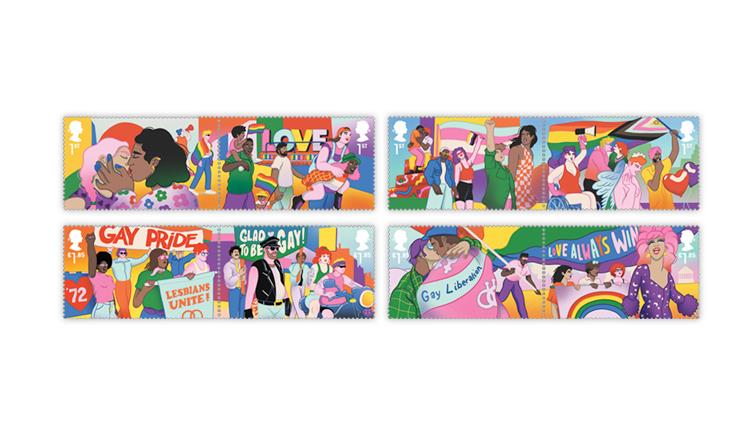 The set of eight Pride stamps depicts imagery from the first Pride rally in 1972 up to contemporary times. Four stamps are valued at the first-class rate, and four stamps are denominated at £1.85. 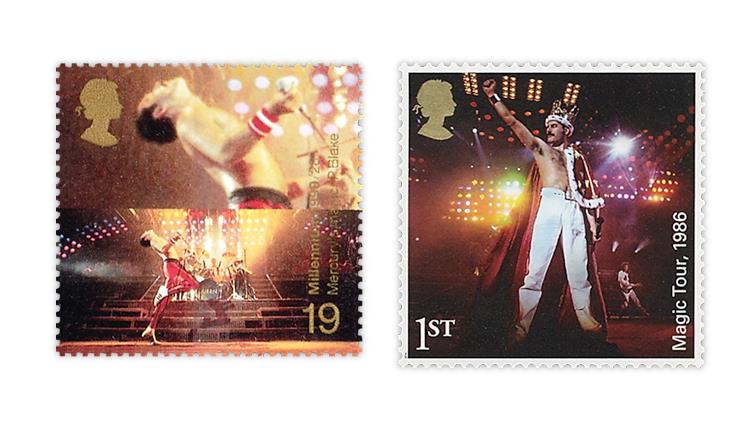 Royal Mail also announced that the Postal Museum in London would display Freddie Mercury’s 54-page childhood stamp album as part of the celebrations for the 50th anniversary of the United Kingdom’s Pride movement. Mercury appears by himself on a 1999 stam
Previous
Next

On July 1, 1972, a crowd gathered in London’s Trafalgar Square and set off for Hyde Park in a march for LGBTQ rights. While this was not the first march or protest for LGBTQ rights in the United Kingdom, it was the first event to be called a gay pride rally.

Presented as four horizontal se-tenant (side-by-side) pairs, the vibrantly illustrated stamps tell the story of Pride over time, according to Royal Mail.

Four of the stamps in the set of eight are valued at the first-class rate (currently 95 pence), and two are denominated at £1.85 (the rate for letters to Europe up to 100 grams and worldwide up to 20 grams).

The stamps feature depictions from this first rally up to the present day. Contemporary imagery includes the traditional rainbow flag with recent updates meant to encompass more members of the community. One of the nondenominated first-class stamps shows an adult holding aloft a large example of this flag.

In a press release, Royal Mail said the inspiration for this first rally came from the United States, where the first Pride events took place to commemorate the anniversary of the Stonewall riots in 1969.

The Stonewall riots were a series of protests by members of the LGBTQ community in response to a police raid of a New York City gay bar called the Stonewall Inn.

Royal Mail noted the spirit of defiant visibility in these first events as the community demanded greater legal equality for gay people. Even though homosexuality was partially decriminalized in England and Wales in 1967, police arrests of gay and bisexual men remained common in the years following, according to Royal Mail.

Royal Mail said that pamphlets distributed at events in 1978 raised awareness of violent assaults on the LGBTQ community, and those attacks continued with the increased climate of homophobia in the wake of the AIDS epidemic of the 1980s.

Pride events continued in the United Kingdom during the 1990s and 2000s. Same-sex couples won the right to adopt in England and Wales in 2002. The United Kingdom legalized same-sex civil partnerships two years later, and the law was changed to allow same-sex marriage in 2013.

Cartor Security Printers printed the set of eight Pride stamps by lithography. The stamps measure 50 millimeters by 30mm each and are perforated gauge 14 on all four sides.

The stamps were produced in sheets of 60 (four different sheets, one for each se-tenant pair) and are also available in panes of 30.