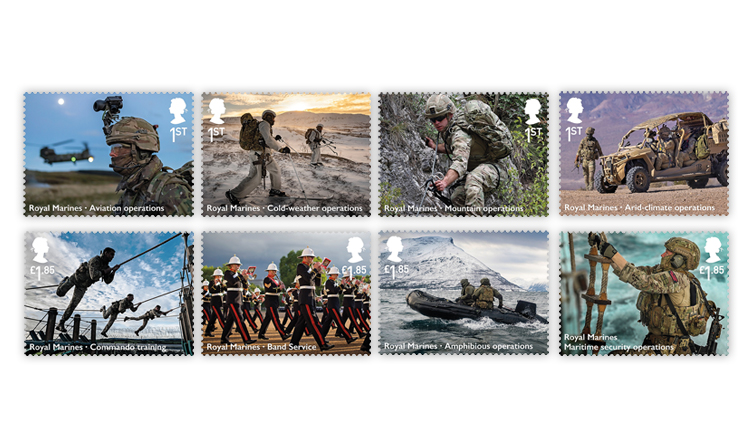 Great Britain's Royal Mail issued a set of stamps Sept. 29 to commemorate the Royal Marines. With roots dating back nearly 400 years, the Royal Marines have the longest infantry training period in the world.

On Sept. 29, Great Britain’s Royal Mail issued a set of 12 stamps to commemorate the elite fighting force known as the Royal Marines.

“Featuring eight stamps and an exclusive miniature sheet, we look at the history of and modern-day operations of the Marines, as well as some of the key operations they’re involved in by sea and by land,” Royal Mail said.

The stamps are presented in two se-tenant (side-by-side) strips of four.

The four stamps comprising one of the strips are valued at the first-class rate (currently 95 pence). The other stamps are denominated at £1.85 (the rate for letters to Europe up to 100 grams and worldwide up to 20 grams).

Each stamp features the silhouette of Queen Elizabeth II that appears on special stamp issues. As reported in the Oct. 17 issue of Linn’s Stamp News, Royal Mail said in a Sept. 27 announcement that it plans to exhaust existing stocks of stamps before issuing stamps with the image of King Charles III.

A first-day cover offered for the stamp issue includes an information card that explains the reasoning behind these different Royal Marines operations and addresses the training required.

“Royal Marines have the longest infantry training period in the world,” according to the card.

“Scaling cliffs, finding inaccessible areas adversaries think are secure, coming from the sea in small boats and helicopters, working at night to conduct raids, moving in quickly, taking the enemy by surprise, getting out just as fast — these skills are the key elements of the Force.”

According to the website of the Royal Navy, “Over 90% of global trade is transported by sea — and inevitably, this attracts the attention of criminals. The Royal Navy is committed to protecting maritime trade from pirates, terrorists and traffickers and keeping the wheels of commerce turning, whatever it takes.

“British ships and units, including the Royal Marines, are committed to maritime security operations around the world. These operations focus on reassurance and wider regional engagement, with the ultimate aim of protecting the interests of the UK and its allies.”

The varied roles employed by members of the Royal Marines could be a result of the organization’s long and varied history. A presentation pack offered with the issue includes information on the history of the Royal Marines from its origins in 1664 to today, as well as the set of stamps and the souvenir sheet.

The presentation pack notes that the Royal Marines first served in …

To continue reading this story about the new Royal Marines stamps, subscribe to Linn’s Stamp News.