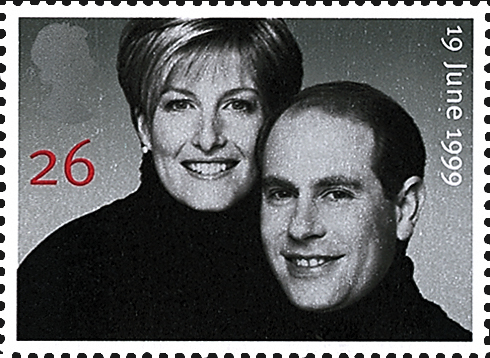 Prince Edward married Sophie Rhys-Jones in 1999. This 26-penny stamp (Scott 1887) celebrates the event. A profile portrait of the couple is shown on the 64p stamp in the set. 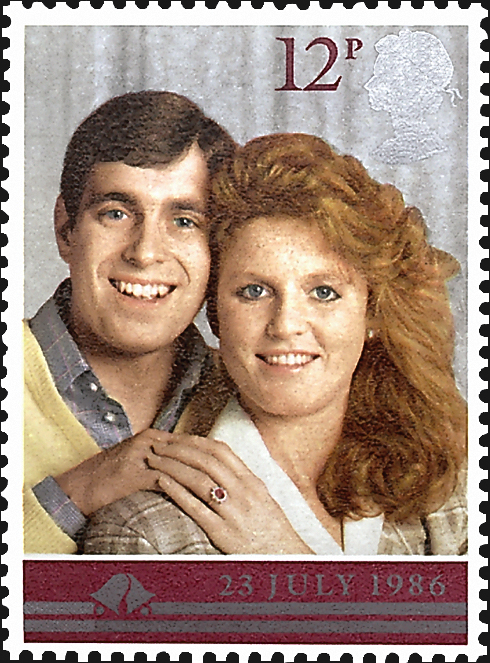 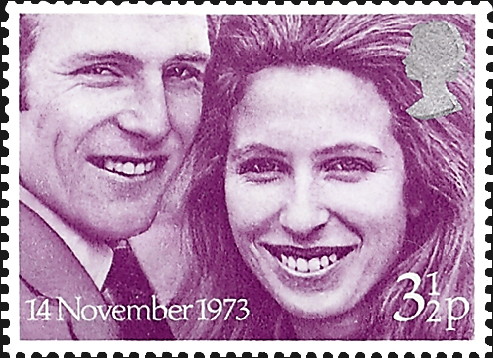 A 3½-penny stamp (Scott 707) honors the marriage of Princess Anne to Mark Phillips in 1973. A 20p stamp features the same design showing the couple. 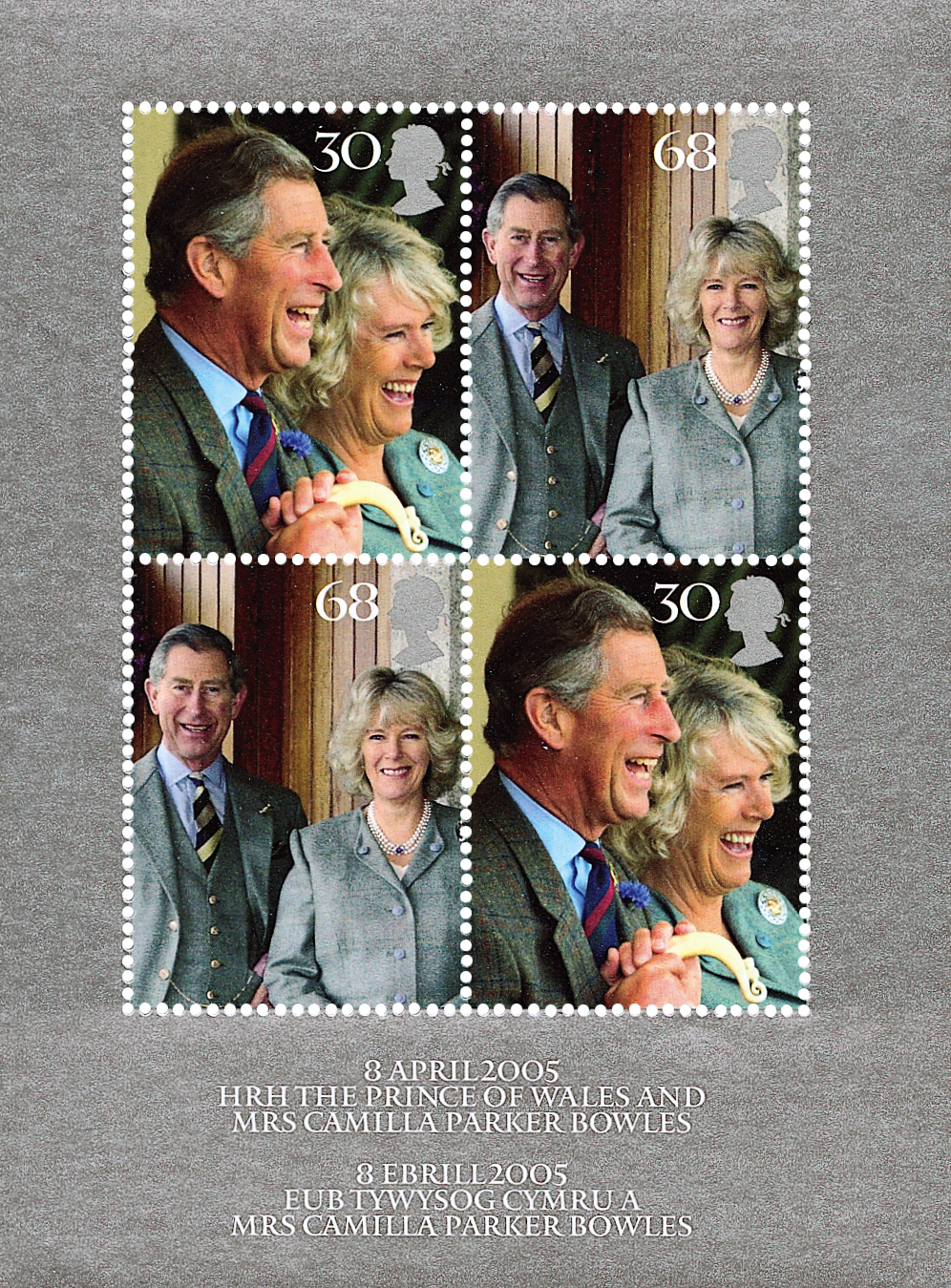 Prince Charles’ second marriage to Camilla Parker Bowles was marked with this souvenir sheet. The wedding date changed after it was issued. 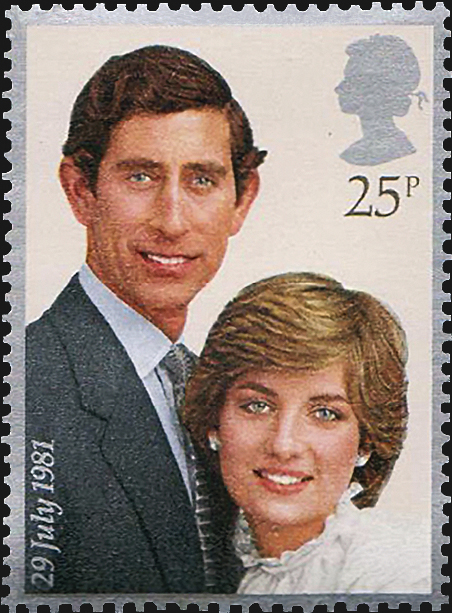 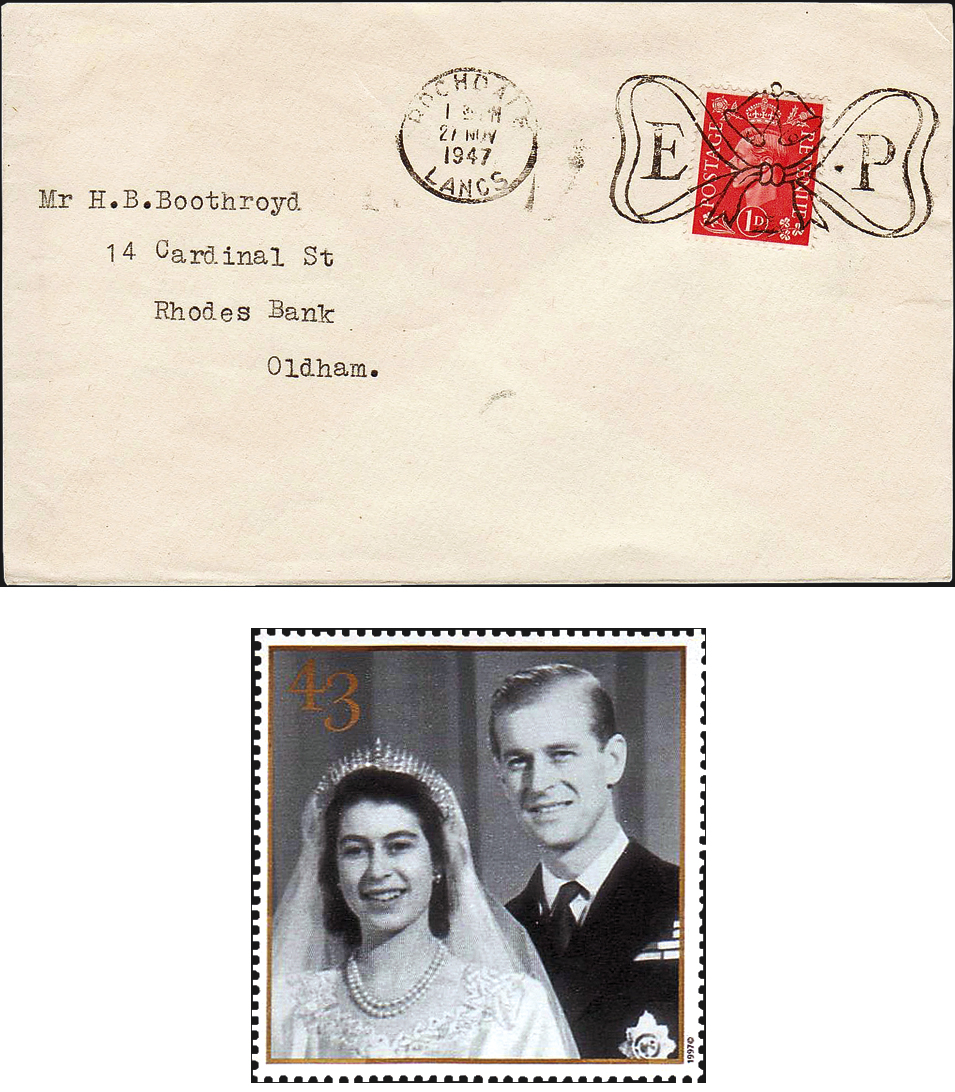 The marriage of Princess Elizabeth to Philip Mountbatten in November 1947 was marked by the General Post Office with a special cancellation seen on this cover. The 43-penny stamp (Scott 1783) from a set of four stamps issued Nov. 13, 1997, for their 50th wedding anniversary is shown at left. The same photo appears on a 20p stamp.

The marriages of the royals, as the royal family are popularly known in Great Britain, have been commemorated on postage stamps.
Queen Elizabeth was married Nov. 20, 1947, four years and three months before she succeeded to the throne upon the death of her father, King George VI.

Her groom was Philip Mountbatten, a lieutenant in the Royal Navy. Before their marriage, her father granted him the title Duke of Edinburgh.

At the time of the wedding, the General Post Office did not issue any commemorative stamps marking the marriage of the future queen, but it did use a special cancellation on mail for 10 days after the wedding.

The cancellation consists of a wedding bow with the initials “E” for Elizabeth and “P” for Philip centered within the loops of the bow and two wedding bells in the center above the knot.

The cover shown nearby bears the special wedding cancellation.

In 1997, upon the occasion of their golden (50th) wedding anniversary, Royal Mail did issue a four-stamp set with two of the stamps, the 20-penny (Scott 1781) and 43p (Scott 1783), bearing a 50-year-old wedding photograph of the couple taken by court photographer Baron.

Prince Charles, heir apparent, was famously married to Lady Diana Spencer July 29, 1981, in a ceremony at St. Paul’s Cathedral in London. The lavish wedding was broadcast on television worldwide to an audience estimated at 750 million people.

The two were divorced in 1996, and Princess Diana was killed in a car crash in Paris a year later.

Prince Charles’ second marriage was to Camilla Parker Bowles on April 9, 2005. A souvenir sheet (Scott 2279) featuring two portraits of the couple in two denominations was issued by Royal Mail to commemorate the event.

The date on the souvenir sheet, April 8, 2005, was one day earlier than the actual wedding, which was postponed a day because the prince, as the queen’s representative, attended the funeral of Pope John Paul II in Rome on April 8.

Stamp dealers sometimes advertise this souvenir sheet as an error, but it is not an error in the design or production. The situation changed after the souvenir sheet was printed.

Princess Anne was the first of the queen’s children to be married, eight years before her brother Prince Charles.She married Lt. Mark Phillips, a member of the Queen’s Dragoon Guards, on Nov. 14, 1973.

Their marriage was memorialized by the post office with a two-stamp set (Scott 707-708).

Their wedding, though not a state occasion, was the first royal marriage commemorated by the issuance of postage stamps.

After divorcing Phillips in 1992, Princess Anne married a second time, but no stamps were issued to mark the occasion.

Two other sons of Queen Elizabeth and Prince Philip have also had postage stamps issued to commemorate their marriages.

In 1996, this royal couple also divorced.

The queen’s fourth child, Prince Edward, married on June 19, 1999. Of all the royal children, Prince Edward is the only one who is still married to his first wife, the former Sophie Rhys-Jones. Their wedding was commemorated on two stamps (Scott 1887-1888).

While weddings are very special occasions, only members of houses of royalty can boast of special postage stamps issued to mark their marriages.