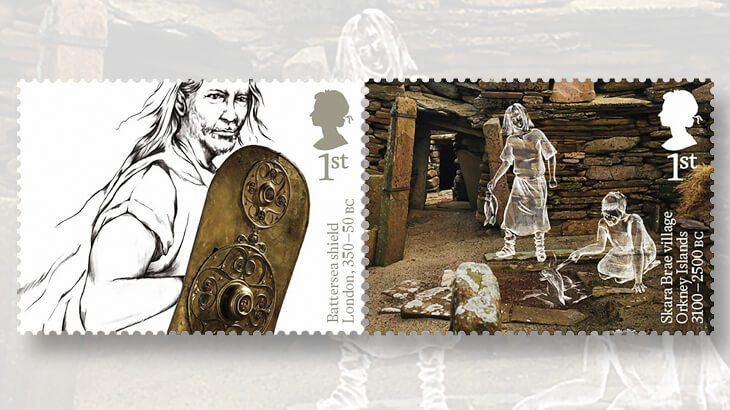 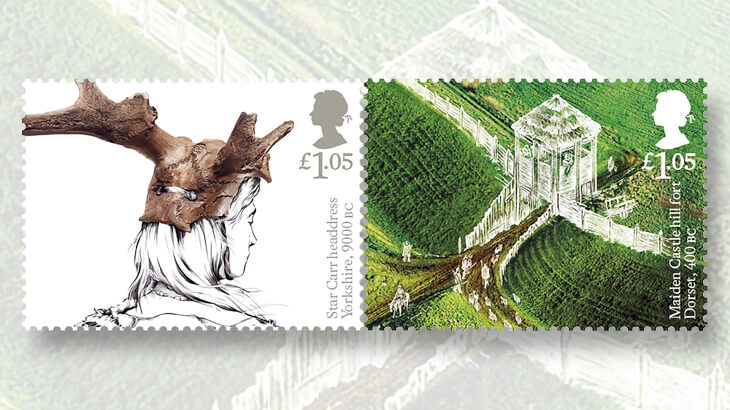 The Star Carr headdress made from a skull and antlers of a red deer and the Maiden Castle hill fort in Dorset are featured on the two £1.05 stamps in the Ancient Britain set. The headdress was one of several discovered in Yorkshire. 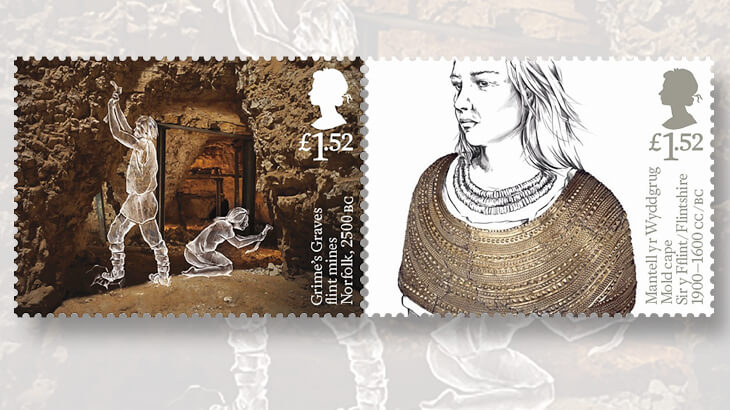 The two £1.52 Ancient Britain stamps depict Rebecca Strickson’s illustrations of workers inside the Grime’s Graves flint mines in Norfolk and a woman wearing the Mold cape made of gold. The cape was discovered in Wales. 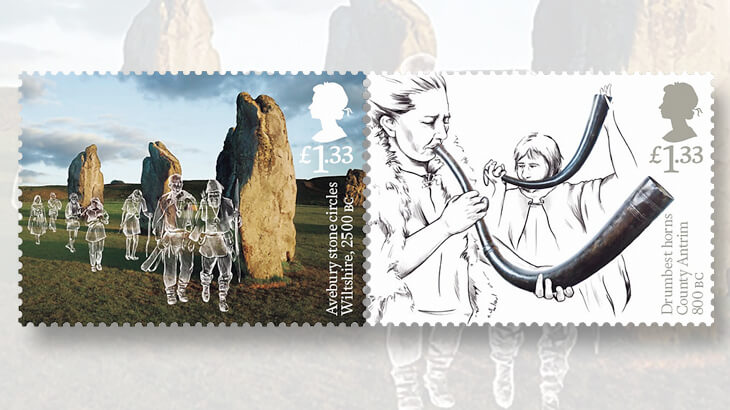 The pair of £1.33 Ancient Britain stamps pictures the Avebury stone circles, a ceremonial monument in Wiltshire, England; and the Drumbest horns.
Previous
Next

In announcing this Ancient Britain issue, Royal Mail said the “stamps give a timeline across thousands of years of history, from a glimpse of Stone Age ritual of 11,000 years ago, to the Iron Age of some 300 BC.”

Artist Rebecca Strickson designed the stamps. Royal Mail described the designs as “overlay illustrations, showing how people lived and worked at these sites and used the objects.”

Strickson said, “When I was first approached to work with them [Royal Mail]on illustrating the Ancient Britain stamps, I was truly over the moon. This period in time has long been a fascination to me, and stamp collecting was something my late father adored in his youth. That these stamps are coming out on what would have been his 68th birthday makes me really smile.”

The stamps are printed in se-tenant (side-by-side) pairs.

The pair of nondenominated first-class stamps features the Battersea shield and the Skara Brae village in the Orkney Islands, Scotland. The current domestic first-class rate is 64 pence.

Found in the River Thames around 1857, the Battersea shield is an Iron Age shield, dating from circa 350 B.C. to 50 B.C., according to the British Museum. Made of sheets of bronze, it includes panels of decorative Celtic-style art.

Skara Brae, a Neolithic village inhabited approximately 5,000 years ago, also was rediscovered in the middle of the 19th century.

The Orkney Islands tourism website said: “It is one of the earliest prehistoric sites in Scotland and was preserved through four millennia beneath the sand dunes. The settlement was discovered in 1850 when a great storm battered the bay and blew away the sand to reveal a glimpse of what lay beneath the ground.

“The site was excavated by Laird William Watt of Skaill who unearthed a stunning find — the preserved ruins of a prehistoric stone village, intact with the furnishings of the day and linked by a communal covered passage.”

Shown on the £1.05 pair are the Star Carr headdress and Maiden Castle hill fort. The £1.05 denomination pays the rate for mail to Europe up to 20 grams and to international countries up to 10 grams.

Made from the skull and antlers of a red deer, the Star Carr headdress dates from approximately 9,000 B.C., according to Royal Mail. It was unearthed at the Mesolithic site at Star Carr in Yorkshire in the 1950s.

English Heritage described Maiden Castle in Dorset as the “largest and most complex Iron Age hillfort in Britain.”

The website also said: “Excavations in the 1930s and 1980s have shed much light on the development of the hilltop, from its origins as a Neolithic enclosure over 6,000 years ago, through many centuries of modification during the Iron Age, to the building of a Romano-British temple here.”

The Avebury Stone Circles and Drumbest horns are pictured on the two £1.33 stamps paying the international rate for mail weighing up to 20 grams.

Together with Stonehenge, Avebury was inscribed on UNESCO’s World Heritage list in 1986.

The Drumbest horns were discovered in a bog in County Antrim, Northern Ireland, in 1840. These bronze horns are on display at the Ulster Museum, which said they date from approximately 800 B.C.

The stamp design depicts the horns being played.

The Ulster Museum said: “Experiment has shown that the horns were intended to be played in pairs with and end blown type acting as a drone, rather like on a bagpipe, and the side blown horn carrying the tune with an almost three octave range.

“The playing technique involves vibrating the lips and the ability to master circular breathing — a bit like breathing in and blowing at the same time!”

The two £1.52 stamps, which are for use on mail to Europe weighing up to 100 grams, picture the Grime’s Graves flint mines and the Mold cape.

The 80-acre area includes as many as 600 mine shafts, a few of which have been excavated. One shaft is open to the public.

A Bronze Age cape dating from approximately 1,900 B.C. to 1,600 B.C., the Mold cape was made from hammering out a 1½-pound gold ingot, according to Royal Mail.

Royal Mail said, “This dazzling object formed the upper part of an elaborate garment that was restrictive to wear but stunning in its impact.”

The cape is named after Mold, a town in Flintshire, Wales, where it was discovered in 1833 by workmen quarrying for stone.

True North designed the stamps, using Strickson’s illustrations and images from other sources.

International Security Printers printed the stamps by offset in sheets of 60 (sold in panes of 30 at most postal outlets).

Other products to be offered in conjunction with the Ancient Britain stamps include first-day covers, postmarks, a set of eight postcards reproducing the designs of the stamps, and a presentation pack with a complete set of stamps and text by archaeologist and author Timothy Darvill.