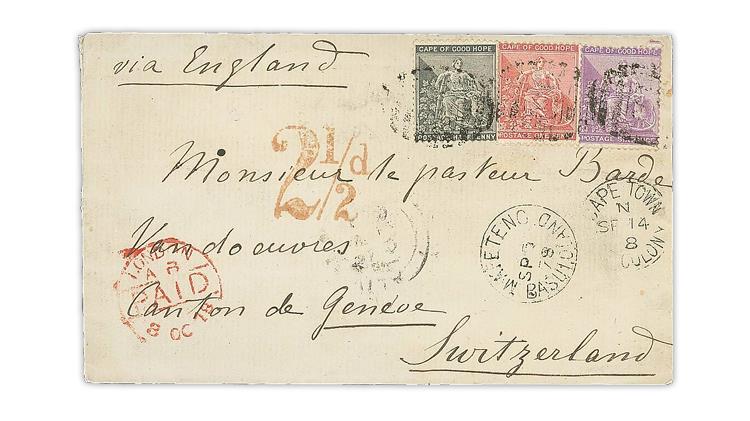 Spink will offer the expansive Greca collection of Southern African postal history Sept. 7 at the Royal Philatelic Society London in London, England. Among the many highlights to cross the auction block is this letter mailed in 1878 from Mafeteng, Basutol 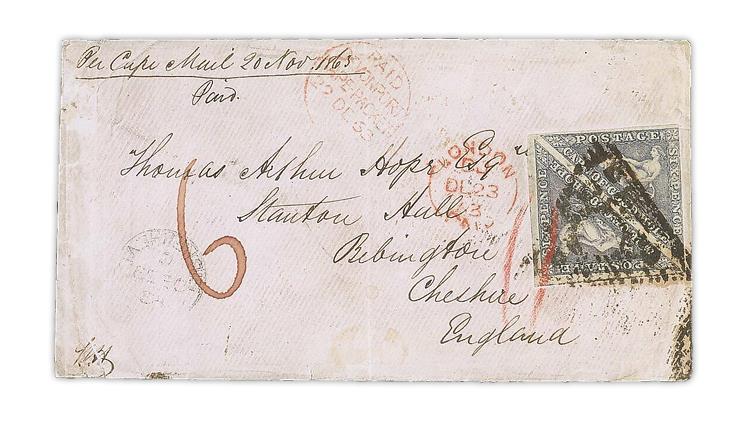 Among the 33 covers in the Greca collection franked with Cape of Good Hope Triangle stamps is this 1863 cover with a pair of the 1855 6-penny grayish lilac that was sent from Bloemfontein, Orange River Colony, to Cheshire, England.
Previous
Next

The 420-lot auction opens with a handsome cover featuring a three-color franking that was mailed Sept. 5, 1878, from Mafeteng, Basutoland, to Geneva, Switzerland.

Basutoland was a former independent native state that was annexed to the Cape Colony in 1871. In 1883 control was transferred directly to the British Crown.

Three strikes of an indistinct barred numeral handstamp were used to cancel the stamps.

Postmarks on the front show that the cover transited through Cape Town on Sept. 14 and London on Oct. 8. Spink notes that a circular datestamp indicating the arrival of the letter in Geneva is on the back but does not specify the date.

Included in the Greca collection is an attractive assemblage of 33 covers franked with Cape of Good Hope Triangle stamps.

One of the more desirable covers was mailed in late October 1863 from Bloemfontein, Orange River Colony (Orange Free State), to Cheshire, England.

This cover, which came from the Hope correspondence, is franked with a pair of the 1855 6d grayish lilac (Scott 5b; Spink describes the color as slate-lilac).

According to Spink, Nov. 9 Cape Town and Dec. 23 Birkenhead, England, circular datestamps are on the back of the cover (not shown).

Spink states that the cover has “a couple of minor imperfections” and once resided in the Maria de la Queillerie and Medina collections.

A used off-cover pair of Cape of Good Hope Scott 5b is valued at $2,150 in the Scott Classic Specialized Catalogue of Stamps and Covers 1840-1940.

A catalog for the Greca collection of South Africa postal history is available as a downloadable PDF document. Online bidding options are available after registering in advance with the firm.

The catalog can be viewed on the Spink website. Click on “auctions,” then “by department” and then on “stamps” to locate the catalog.