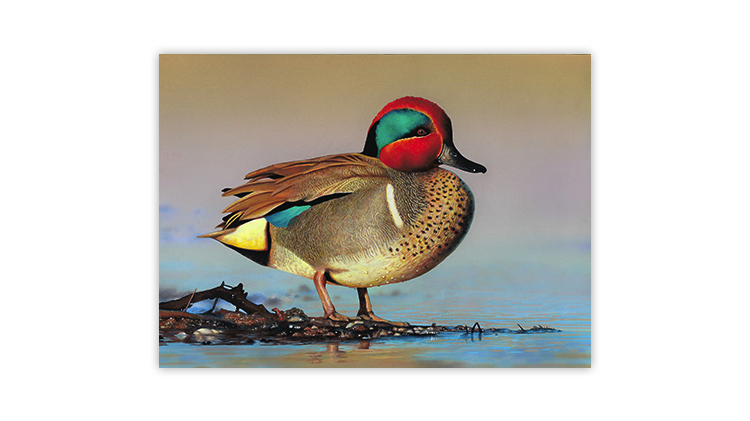 A painting of a green-winged teal by 15-year-old Madison Grimm will illustrate the United States 2022 junior duck stamp to be issued June 24. Artwork by Grimm also appears on the junior duck stamps issued in 2013 and 2020. Image courtesy of the U.S. Fish

South Dakota artist Madison Grimm’s acrylic painting of a green-winged teal has been chosen to appear on the 2022 junior duck stamp. The United States Fish and Wildlife Service announced the winning artwork April 25.

A panel of five judges picked the 15-year-old’s painting for the top honor from among 53 entries in this year’s National Junior Duck Stamp Art Contest.

Junior duck stamps are issued by the U.S. Fish and Wildlife Service and are listed in the Scott Specialized Catalogue of United States Stamps and Covers following the listings for the U.S. Department of the Interior’s migratory bird hunting and conservation stamps, more commonly known as federal duck stamps.

“The Federal Junior Duck Stamp Conservation and Design Program began in 1989 as an extension of the Migratory Bird Hunting and Conservation Stamp,” the Fish and Wildlife Service said. The first junior duck stamp was issued in 1993.

The junior duck stamps sell for $5 each at the U.S. Postal Service’s online postal store and select national wildlife refuges. The money collected is used for conservation education, including awards and student scholarships.

Grimm received $1,000 for her first-place win. Catheryn Liang, 15, of Texas earned a second-place prize of $500 for her acrylic painting of Canada geese. London Peterson, 17, of Oklahoma won $200 for her acrylic portrayal of a common goldeneye, which placed third.

Alexa Jochmann, 17, of Wisconsin received $200 for winning the conservation message competition with “Wetland conservation helps keep our world as colorful and diverse as the ducks that live in them!”

Jerome Ford, assistant director for migratory birds for the Fish and Wildlife Service, said, “Young people from all different backgrounds and interests from all over the country share a common interest in art and nature, and we are all lucky enough to see their amazing work.”

The junior duck stamp and the federal duck stamp will both be issued June 24.

Minnesota artist James Hautman’s acrylic painting of a pair of redheads floating in water will be illustrated on the 2022 federal duck stamp.