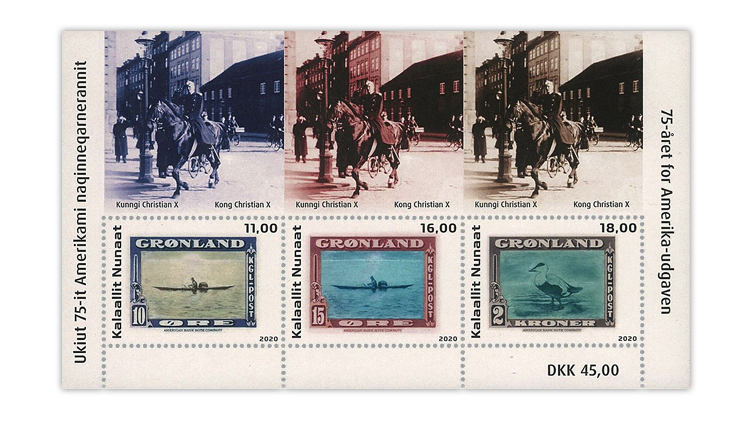 A new souvenir sheet from Greenland commemorates the 75th anniversary of the American issue, a set of 1945 stamps printed by the American Bank Note Co. in New York, and shows proposed artwork for three of the stamps. 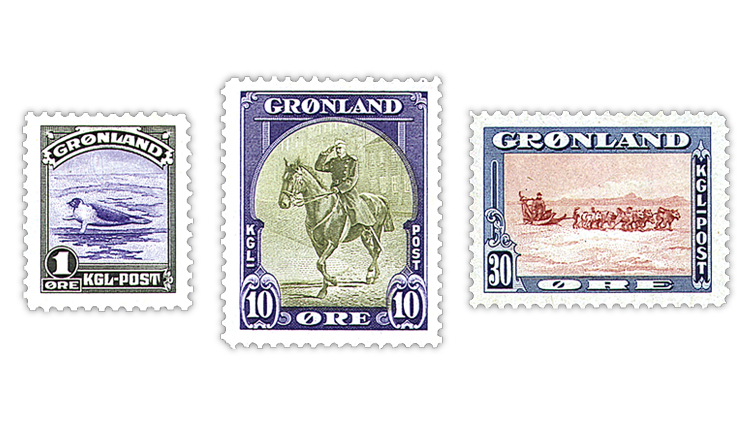 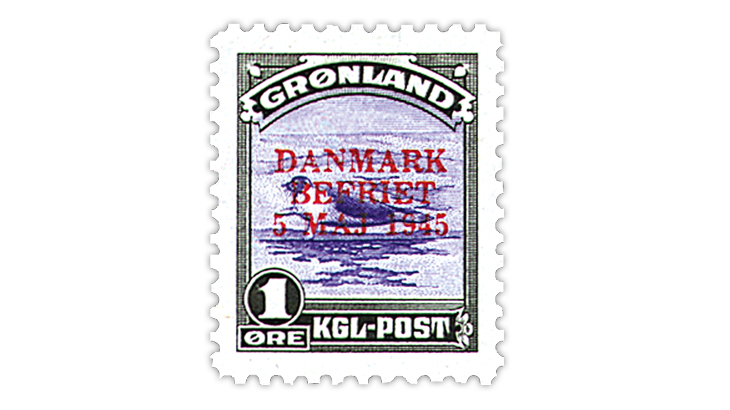 The American issue stamps were overprinted to celebrate the liberation of Denmark in May of 1945.
Previous
Next

A new souvenir sheet from Greenland commemorates a philatelic connection to the United States.

Issued May 5, the sheet marks the 75th anniversary of a set of stamps called the American issue because it was printed in the United States by the American Bank Note Co. Those stamps were issued Feb. 1, 1945 (Scott 10-18).

The 1945 stamps, which range in denomination from 1 ore to 5 kroner, show six different designs: a harp seal, Denmark’s King Christian X on horseback, a dog team, a polar bear, a man in a kayak, and an eider duck.

Greenland Post reports that the three stamps in the new souvenir sheet reproduce original artwork for the 1945 American issue.

The first two stamps in the souvenir sheet depict essays (stamp designs that were submitted to postal authorities and that ultimately were not used) featuring the kayak design with denominations of 10 ore and 15 ore. However the issued stamps with those denominations (Scott 13-14) depict King Christian X on horseback. The image that was the basis for the King Christian X stamp design is shown in three colors in the upper selvage of the souvenir sheet.

An eider duck is featured on the essay for the 2kr stamp, which is shown on the 18kr denomination in the souvenir sheet. The issued 2kr stamp (Scott 17) depicts a man in a kayak.

To start at the beginning, Greenland issued its first stamps in 1938 (Scott 1-9). Because Greenland was a Danish colony, the stamps were printed in Denmark.

On April 1, 1940, Denmark was occupied by Germany, and most ties, including postal matters, with its remote colony were cut. A year later, a treaty was signed allowing the United States to protect Greenland. Greenland also received much of its supplies from the United States.

By 1943 Greenland was running low on some denominations of its 1938 issue and also wanted some higher denominations for use on airmail.

According to Petersen, Eske Brun, the national bailiff of Greenland, sent a proposal to the American Bank Note Co. for nine stamp denominations, indicating the subjects of their designs and the quantities to be printed. Also enclosed were photographs and books to use in creating the stamp designs.

By May 10, 1944, what Petersen calls a “first draft of the American issue” was ready and forwarded to the “Greenland department within the Danish Consulate in New York.”

Some changes were requested, including the addition of a design showing the king on horseback, which had not been included in the original letter.

Three of the changes were made to the essays shown on the new souvenir sheet for the 75th anniversary.

“The 10 and 15 ore and 2 kroner values thus ended up being printed with other stamp designs than those that were originally planned.”

The American Bank Note Co. printed the stamps, and they were issued Feb. 1, 1945. The stamps were available in Greenland and from the Greenland department of the Danish consulate in New York.

The essays, which Petersen had called the “first draft,” were discovered many years later.

He wrote in 2002: “The discovery of this first draft is of one of several interesting objects that has turned up in Denmark during recent years. This offers new opportunities to increase the awareness of the American issue.”

Lowe-Martin printed the 75th anniversary souvenir sheet by offset. The layout was by Robert Dam and the design firm DAMgrafisk. The sheet measures 140 millimeters by 80mm.

For ordering information, visit Greenland Post’s website; or write to Post Greenland Filatelia Service Center, Kvindevadet 42, 5450 Otterup, Denmark. Greenland Post reports that there may be delays in shipping because of air transportation disruptions caused by the coronavirus COVID-19 pandemic.