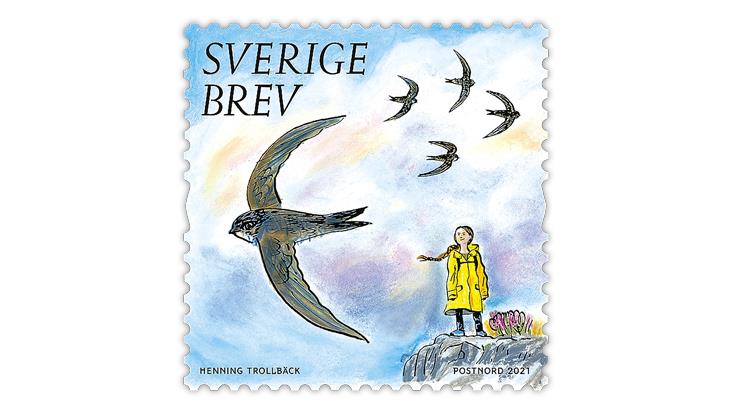 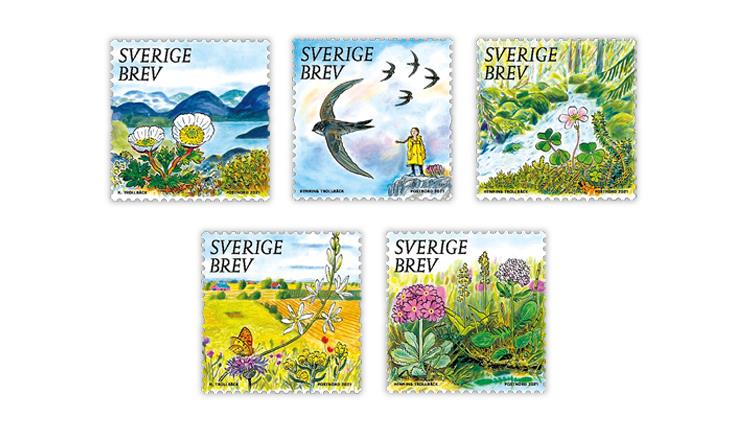 You might need a magnifying glass to see her, but teenage environmental activist Greta Thunberg in a yellow raincoat is visible in the lower right corner of a new Swedish postage stamp.

The stamp is one of a set of five issued Jan. 14 by PostNord, the postal authority for Sweden, featuring colorful nature scenes by artist Henning Trollback. The image of Thunberg, who turned 18 Jan. 13, is included in the lower right corner in the design of a stamp that also shows four birds in flight.

These nondenominated Precious Nature stamps are inscribed “BREV,” meaning they are good for the domestic rate for a letter weighing up to 50 grams (currently 12 kronor). The self-stick stamps are being issued in booklets of 10 that contain two of each stamp.

PostNord described the stamps as illustrating the “goals and objectives set by the Swedish parliament to preserve Sweden’s unique nature for generations to come.”

In its announcement about the stamps, PostNord also said, “Environmental issues have received greater attention in recent times, largely thanks to Greta Thunberg’s school strike for climate or Fridays for Future, which has had a global impact with its calls for action on global warming and climate change. What started on August 20, 2018 when Greta Thunberg sat down alone outside the Riksdag (Swedish Parliament) building in Stockholm in protest to highlight the environmental issue in the run-up to the elections the same autumn, is today a movement spanning over 100 countries on all continents.”

The other four Precious Nature stamps feature mountain, river, stream and farmland scenes that highlight various wildflowers and other flora. A butterfly is perched on a flower on one of the stamps.

Kristina Olofsdotter, head of Swedish stamps at PostNord, offered her take on the new stamps: “We’re so pleased to release this collection and that Greta, among several illustrations of important nature, will be symbolized on our stamps. These natural places are very important and we all need to do our part to be able to preserve it for future generations. It was an obvious choice to portray the environmental issues affecting us. At PostNord we also have a great responsibility to decrease our own climate impact and to act as a thought leader of our industry’s progress in this field.”

Five other stamps issued Jan. 14 celebrate the 400th anniversary of Gothenburg, Sweden. In 2020 residents of Gothenburg were asked to name their favorite places and buildings in the city. The new stamps show illustrations of some of the residents’ top choices.

PostNord also provided details about other Swedish stamps to be issued in 2021.

A century of voting rights for women in Sweden will be commemorated on five stamps to be issued April 29.

“In the 1921 election, women and men were able to cast their votes on equal terms — and the first five women subsequently took their seats in the Riksdag,” PostNord said.

Also set for issuance April 29 are five stamps picturing works of porcelain “by the most prominent designers from the heyday of the Swedish porcelain industry, from companies such as Gustavsberg and Gefle/Ekeby,” according to PostNord. “Their household porcelain needed to be not only beautiful but also durable and functional.”

A new coil stamp picturing Queen Silvia is also scheduled for April 29. This stamp will satisfy the 24kr rate for an international letter weighing up to 50 grams.

Two sets of stamps are scheduled to be issued Aug. 26. Five stamps picturing cut flowers will showcase what PostNord calls “late summer splendor,” and a souvenir sheet of three will pay tribute to aircraft used to fight forest fires.

Prolific stamp engraver Czeslaw Slania (1921-2005) will be honored on the centennial of his birth with a souvenir sheet of three to be issued Oct. 21.

Slania served as the royal court engraver for Sweden for more than 30 years and is credited with engraving more than 1,000 stamps.

His 1,000th design is the Swedish 2000 50kr souvenir sheet of one (Scott 2374) that shows a detail from David Klocker Ehrenstrahl’s 17th-century painting Great Deeds by Swedish Kings. The stamp is listed in Guinness World Records as the largest engraved stamp.

PostNord will close out 2021 with two issues scheduled for release Nov. 11.

Ten stamps will be issued for sending traditional Christmas greetings.

“Sending greetings is a cherished tradition at Christmas. Many people prefer to send a physical greeting in the form of a Christmas card,” PostNord said.

Five stamps featuring winter motifs will be issued in a booklet of 10 (two of each design).

Look for U.S. Kelp Forest pane of 10 in Nature of America series