Gripper cracks before the 1954-68 Liberty issue 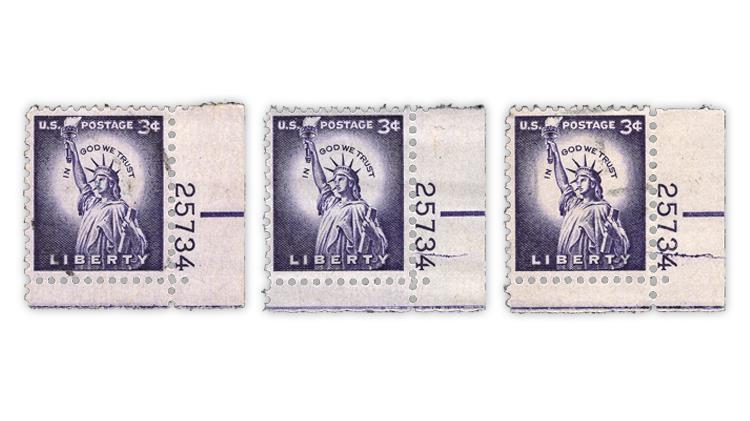 Figure 1. These three lower right plate number 25734 singles of the 3¢ Statue of Liberty stamp in the Liberty series show a progression of the gripper crack from before it occurred to fairly well developed. 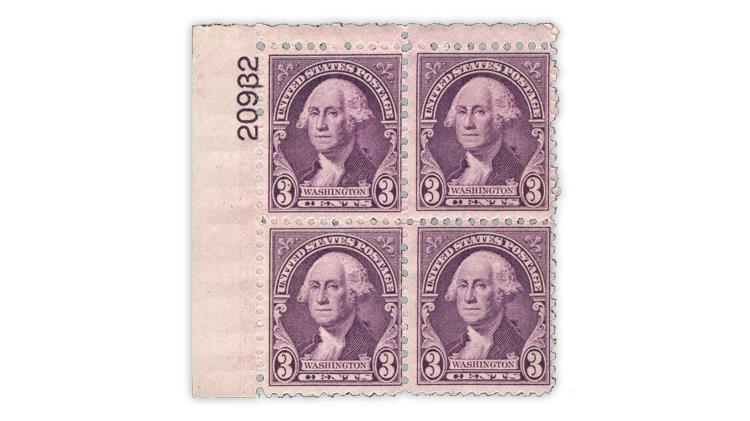 Figure 2. Gripper cracks predate the Liberty series of 1954-68. This example is a particularly well-developed gripper crack that nearly closes off the open areas of the “3” on the upper left plate number 20932 of the 1932 3¢ Washington by Gilbert Stuart stamp.
Previous
Next

Gripper cracks are a specific type of plate variety that results from stress on rotary press plates, specifically on the gripper in each corner that holds the semicircular metal printing plates to the circular rotary drum.

The grippers are underneath the plate numbers in the corners of 400-subject stamp sheets. Stress can result in the face of the plate developing cracks horizontally through the plate number. This did not happen frequently, but it is seen most often on stamps of the Liberty series of 1954-68, affecting about 35 plate numbers on different denominations from the 1¢ to the 50¢.

The plate numbers that developed cracks can be found with no crack before the crack developed, with a light crack as it began to develop, and with a much more obvious heavy crack. Figure 1 shows examples of this progression.

Until recently, I thought these gripper cracks were limited to Liberty issues, plus a couple of commemorative stamps from the same period and some later stamps, but I recently stumbled across an earlier example. Shown in Figure 2, it is a 1932 3¢ Washington by Gilbert Stuart stamp with an advanced-stage gripper crack that nearly closes off the open part of the “3” in upper left plate number 20932.

This is called a “gash” in the Encyclopedia of Plate Varieties on U.S. Bureau Printed Postage Stamps by Loran C. (“Cloudy”) French, but I believe it to be a particularly well-developed gripper crack.

In addition, there are other listings of 3¢ Washington stamps in French’s book that he does call gripper cracks.

Curiously, gripper cracks almost disappear on the 1938 Presidential issue; there is only one that French identifies. But they flower in the Liberty series. I don’t know why. Perhaps it might have something to do with the thickness of the plates being used as the Bureau of Engraving and Printing changed over from wet to dry printing in the mid-1950s.

The new find has caused me to study French’s reference work more thoroughly and to update my list of known U.S. plate numbers and positions on which gripper cracks can be found.

The list is available to Linn’s readers. Send an email request to me at jmhstamp@verizon.net, and I will send the list to you as an attachment. If you want a hard copy, please send 10¢ in mint postage and a stamped, addressed envelope to me at Box 1125, Falls Church, VA 22041-0125.