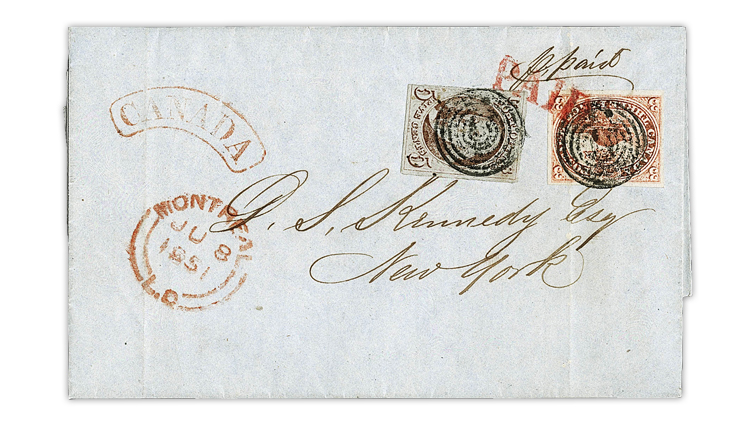 Mailed in Montreal in 1851 and bearing stamps of the first issues of Canada and the United States, this folded letter will be offered by Robert A. Siegel Auction Galleries in the Oct. 29-30 auction of United States Postal History from the William H. Gross 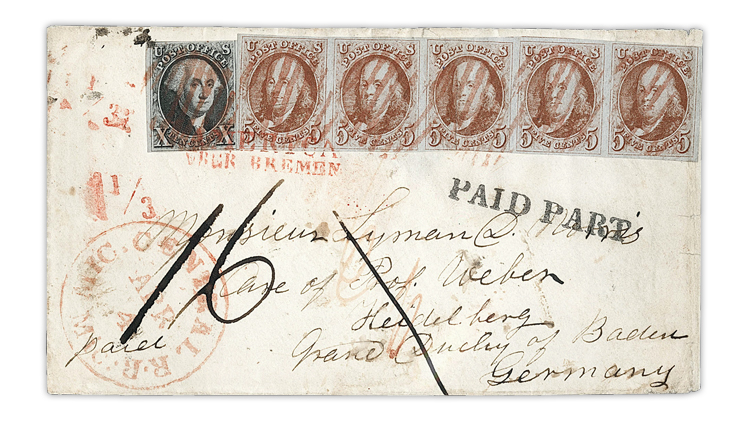 Known as the Heidelberg cover, this envelope mailed to that German city in 1851 is franked with a single U.S. 1847 10¢ black and a horizontal strip of five of the 1847 5¢ orange brown. It will be offered during the Oct. 29-30 Siegel auction of the Gross c 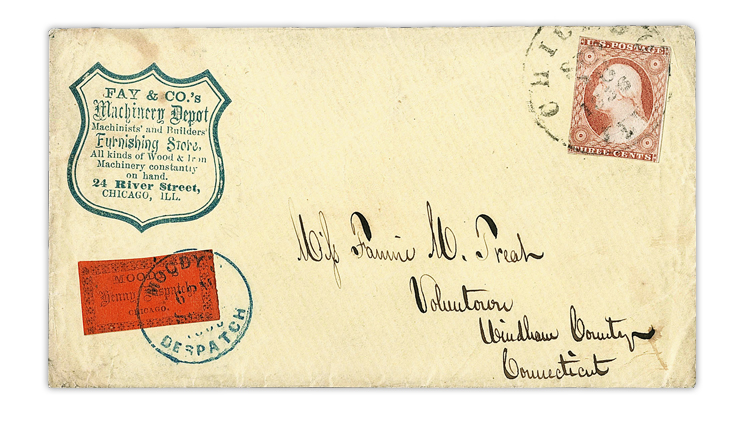 The two stamps on this 1856 cover from the upcoming Gross collection sale include a Moody’s Penny Despatch stamp with a unique spelling error.
Previous
Next

The auctioning of the William H. Gross collection of United States stamps and covers continues Oct. 29-30, as Robert A. Siegel Auction Galleries offers U.S. postal history from the Gross collection.

The public auction is the third in the current series of sales of U.S. material from the Gross collection and will take place at the Collectors Club in New York City. Advance registration to reserve a seat at the sale can be found on the Siegel website.

The sale includes some of the most famous U.S. postal history items known, including a cover mailed in Montreal in 1851, franked with the first issues of both the United States and Canada.

In their introduction to the sale, Charles F. Shreve and Tracy L. Carey, who advised and guided the famed bond-fund manager as he assembled his unmatched collections, wrote: “Collecting covers was a natural extension of his collection of rare stamps and multiples. … When Bill began to exhibit his collections, these important and beautiful covers were essential to his success in garnering top international awards.”

Now that Gross is selling his U.S. material, collectors will discover opportunities in these sales to add unique and historic items to their collections.

The auction will open with 14 covers of postmasters’ provisionals, including a combination of the New York 5¢ black postmaster’s provisional (Scott 9X1d) and the United States City Despatch Post 3¢ black on blue glazed paper (6LB5). The two stamps frank an 1845 cover mailed to Philadelphia.

This early stamped cover is accompanied by a 1974 Philatelic Foundation certificate of authenticity and carries an estimate of $15,000 to $20,000.

Four lots offer five bisected usages of the 10¢ black, and a sixth bisect turns up under the waterway markings category (in combination with a Lake Champlain steamboat route agent’s circular datestamp).

A number of other bisects of later issues, including the 1851 12¢ black (Scott 17a), are offered later in the auction.

The folded letter addressed to New York was mailed in Montreal on June 8, 1851, barely a month after Canada’s stamp was issued on April 23, and just a few weeks before the U.S. 1847 stamps would be demonetized on July 1.

Both stamps are tied by strikes of the Canadian seven-ring target cancel and a single red “PAID” arc handstamp applied in New York. Additional markings include a red Montreal circular datestamp and a red “CANADA” in framed arc cross-border handstamp.

The cover’s provenance includes Alfred F. Lichtenstein and Louis Boyd Dale, Duane Hillmer, Louis Grunin, Duane B. Garnett, Leonard Kapiloff, Guido Craveri and Gross. It was signed in 1944 by Stanley B. Ashbrook with a certifying notation and further authenticated by the Philatelic Foundation in 1992. It is offered with an estimate of $300,000 to $400,000.

Another star of this sale is the Heidelberg cover, mailed in 1851 to that city in the duchy of Baden, part of the German Confederation, and franked with a single 1847 10¢ black stamp and a horizontal strip of five of the 5¢ orange brown variety (Scott 1b). The white envelope is struck with railroad and ocean mail datestamps and post office markings documenting its elaborate journey.

As Siegel explains, the stamps prepay a 34¢ fee (unavoidably overpaying by 1¢) for the treaty rate to Germany for mail carried by an Ocean Line steamer. It is one of four verified 1847 10¢ covers to Germany.

Siegel describes it as “one of the most important and spectacular covers in classic philately,” and offers it with an estimate of $150,000 to $200,000.

Gross is the owner of the earliest documented use of the 1847 10¢ stamp, a domestic cover dated July 2 at New York City, but that remarkable item is not offered in this sale. It is currently on loan to the Smithsonian National Postal Museum in Washington, D.C., where it is on display, fittingly enough, in the museum’s William H. Gross Stamp Gallery.

The auction does include three first-day covers from the 1851 stamp issue that followed the 1847s, all dated in some way on July 1: the 1¢ blue Benjamin Franklin type II (Scott 7) on a dated printed circular, the 3¢ orange brown George Washington type II (10A), and the 3¢ orange brown type I (10).

The elusive 1851 1¢ blue type I (Scott 5), known as 7R1E for its position on the right pane on plate 1 in its early state, is offered on three different covers, including an example showing the top sheet margin.

Later in the auction, an 1851 3¢ dull red type II stamp (Scott 11A) is found on a cover alongside a local stamp with a unique error: the 1856 1¢ black on red glazed surface paper Moody’s Penny Dispatch stamp with “Penny” misspelled as “Henny” (110L1b).

The listing for this local stamp error in the Scott Specialized Catalogue of United States Stamps and Covers describes the very stamp being auctioned, the only known example, tied to the 1856 cover with the Moody’s Despatch circular datestamp.

The Scott catalog lists a value of $45,000 for this cover, with that amount printed in italics to indicate that it is an object difficult to value accurately. Siegel has suggested an estimate of $20,000 to $30,000 for the one-of-a-kind item.

There are single stamps being offered in this auction as well: examples struck with the famous carved pictorial cancels from Waterbury, Conn. The Gross collection includes dozens of these, on single stamps and on cover, along with similar illustrative cancels from other locations including New York City, Boston, Louisville, Ky., and more.

There is much more to peruse in this auction, which can be viewed entirely online or by downloading the PDF catalog from the Siegel website.