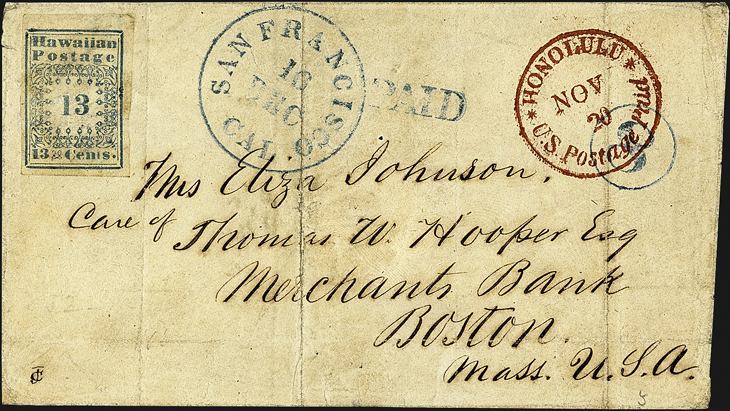 Nine covers exist with a 13¢ Hawaiian Missionary stamp, and two are in the National Postal Museum. Only three bear sound stamps, and they are all in the William H. Gross Hawaii sale offered by Robert A. Siegel Auction Galleries on May 29. This one, perhaps the prettiest, is the only one on which the stamp shows part of the papermaker’s crest, and the only one with the San Francisco postmarks in blue. It is estimated at $150,000 to $200,000.

On this iconic piece of Hawaii postal history from the William H. Gross collection, five examples of the provisional manuscript “5” surcharge on the 13¢ King Kamehameha III issue of 1857 pay the quintuple rate for a letter weighing between 2 ounces and 2½ ounces. The United States 10¢ and 12¢ Washington stamps pay the domestic 10¢-per-½-ounce rate for a letter traveling across the country, plus the 2¢ ship captain’s fee. The cover is estimated at $250,000 to $350,000. 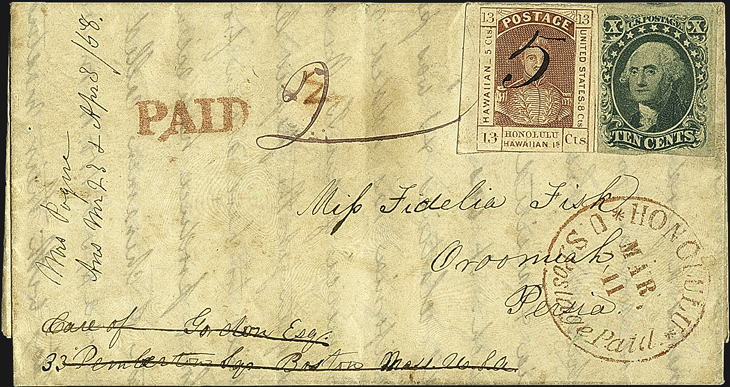 The May 29 auction of the William H. Gross collection of Hawaii will offer this cover addressed to Persia bearing the dark red surcharged 5¢-on-13¢ King Kamehameha stamp alongside a United States 10¢ Washington type II stamp. The cover is estimated at $100,000 to $150,000. 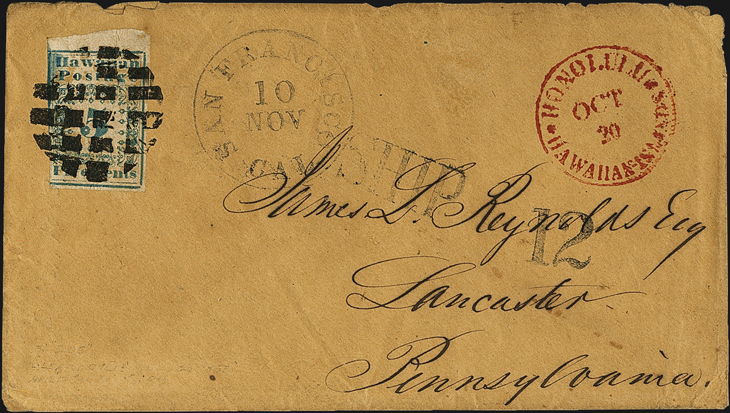 The only known example of an undamaged 5¢ Hawaiian Missionary stamp on cover, from a letter sent by a U.S. Navy admiral to his brother in Pennsylvania in 1853. It is being offered with an estimate of $150,000 to $200,000. 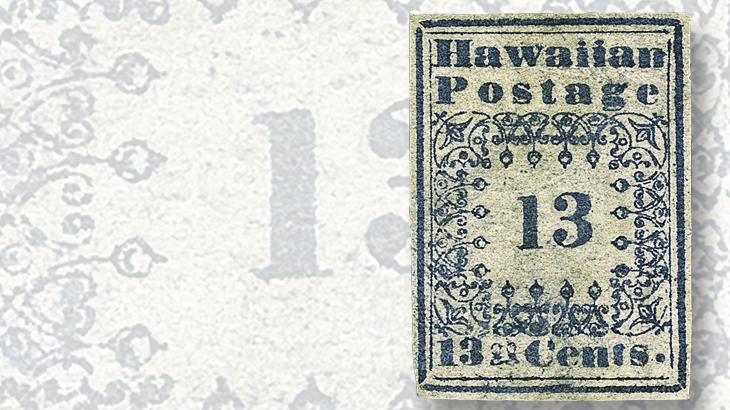 World Stamp Show-NY 2016 will host the sale of the William H. Gross collection of Hawaii on May 29, and will include this stamp recognized as the finest unused example of the 1851-52 Hawaii 13¢ Hawaiian Postage Missionary stamp.
Previous
Next

In a surprise move, the planned May 29 auction of the William H. Gross collection of outstanding Switzerland rarities at World Stamp Show-NY 2016 has been pre-empted by a private sale of the entire holding to a Swiss collector.

In its place, Gross has decided to auction his superlative collection of Hawaii at the show.

The planned auction of the Switzerland collection was one of several announced by Robert A. Siegel Auction Galleries and its Siegel International division, run by Charles Shreve, for the once-a-decade international show.

Linn’s previewed the Switzerland material in the April 18 issue.

The collection had been purchased by Gross in 1999 from the heirs of G. Anderegg, a Swiss collector who built it into a multiple award-winning exhibit during the 1950s and 1960s. After Anderegg died in the 1970s, his collection lay dormant until Gross bought it.

Although Gross had tried to build upon it, he was somewhat stymied by the fact that it was already of such high caliber that over the 16 years he owned it, he succeeded in finding only four stamps and covers worthy of adding.

In April, Shreve estimated the total realization for the Anderegg collection at $3 million to $4 million, but in a press release on May 4, Shreve reported that the new buyer, represented by the Swiss father-and-son stamp dealers Gottfried and Markus Honegger, would be paying $4.5 million.

As has been his habit with the last seven segments of his stamp collection he has sold, Gross and his wife, Sue, are donating the entire amount to charity.

Shreve said Gross was “very pleased” that the collection was sold for a favorable price, but that he still wished to support World Stamp Show-NY 2016 with an offering.

As a result, “The William H. Gross Collection — Hawaii: Important Stamps and Postal History” will be auctioned at New York’s Javits Center, where the show is being held, on Sunday, May 29, at 1 p.m. in room 1E03.

It will be followed at 3 p.m., as previously planned, by the sale of the second part of Steven Walske’s collection of trans-Atlantic mail between France and the United States.

The Hawaii collection comprises 77 lots, with an overall estimate of $2 million to $2.5 million.

It starts with the 1851-52 Missionary issue, so dubbed because it was printed and used by the Christian missionary community that had settled in the island kingdom in the early 19th century, through to overprint errors of the 1893 provisional-government issue.

The Missionary stamps are among philately’s greatest classic rarities.

Printed from typeset lettering, numerals and dingbats on fragile, tissue-like paper, they are typically found damaged or repaired. They were replaced after a couple of years by an engraved issue with a portrait of King Kamehameha III.

“The instantly recognizable Hawaiian Missionary stamps and their fascinating history have always captivated collectors,” wrote Shreve in the introduction to the sale catalog. “But the extreme rarity of these classic issues makes it difficult for more than a few collectors to own them, and nearly impossible for any collector to own more than a few of them.”

There are 10 Missionary stamps in the Gross sale.

These include the only recorded sound, unused example of the 5¢ (Scott 2) out of a dozen known. It is estimated at its Scott Specialized Catalogue of United States Stamps and Covers value of $55,000, but that figure is for a faulty stamp.

There is the finest unused example in existence of the 13¢ stamp inscribed “Hawaiian Postage” (Scott 3), valued by Scott at $37,000, which Shreve said he expects to realize “in excess of $50,000.” Another unused 13¢, with a slightly different setting of the lettering, shows some typical damage and repair.

Rounding out the Missionary group are three 13¢ covers on which the stamps are all sound, and a fourth 13¢ cover that is the earliest known cover with an intact Missionary stamp. All four lots are estimated at $100,000 to $150,000.

“Sharp-eyed collectors with good memories will probably notice one stamp missing from this auction,” continues the introduction. “The only recorded unused 2¢ Missionary — ex Ferrary, Burrus, B.D. Phillips, Ostheimer and Honolulu Advertiser — belongs to Mr. Gross, and he wishes to retain just this one stamp.”

Visitors to World Stamp Show-NY 2016 will still be able to view the unique unused 2¢: not in the auction room, but on display in the Court of Honor, with the three-frame display of Gross’s iconic United States rarities.

Also featured in the sale are several beautiful covers with the 1853 Kamehameha III 5¢ and 13¢ stamps (Scott 5 and 6) and the provisional manuscript “5” surcharge that was added to some of the 13¢ stamps (7).

There is a cover addressed to Persia bearing the surcharged stamp alongside a United States 10¢ Washington, type II (Scott 14) of 1855. The tale of how the letter traveled from Honolulu to a women’s seminary in Oroomiah (modern-day Urmi, Iran) is told in detail in the deeply researched sale catalog. The cover is estimated at $100,000 to $150,000.

Perhaps the most spectacular item of all is a famous quintuple-rate cover from Honolulu to New Bedford, Mass., franked with five of the Hawaii provisional surcharges and 52¢ in U.S. postage: a single 1855 10¢ Washington, type II (Scott 14) and three of the type III (15), as well as an 1851 12¢ Washington (17).

This cover is the only one to bear more than one of the provisionals, and its impressive ownership history, listed in the sale description, includes Caspary, Lilly, Rust, Ishikawa and Giamporcaro. Gross acquired it in 1999 for $300,000 plus premium. It is estimated now at $250,000 to $350,000.

The sale is being presented jointly by Shreve and Tracy L. Carey. The two have had a long-standing relationship with Gross in helping him build and then dispose of his collections over the years. Carey will call the auction for the Siegel firm on May 29.

All lots will be subject to Siegel’s standard 15 percent buyer’s commission. The William H. Gross Hawaii sale catalog can be downloaded free on Siegel's website, or a printed edition can be ordered by writing to Siegel at 60 E. 56th St., 4th Floor, New York, NY 10022, or calling 212-753-6421.

Viewing will take place at World Stamp Show–NY 2016 on Saturday, May 28 at Siegel’s super-booth, 1229, and prior to that by appointment at Siegel’s offices.

Since 2007, the Grosses have donated $25 million to various humanitarian charities by auctioning stamps. The main beneficiaries of the Switzerland sale are the PIMCO Foundation, which Gross remains actively involved with despite his departure from that bond-trading firm, and the New York Times Neediest Cases Fund. The nonprofit Kershaw’s Challenge and the United Nations Sustainable Development Solutions Network also received money.

The Hawaii sale will benefit the Hawaii Food Bank, which provides emergency food assistance to people in need, and the Smithsonian National Postal Museum.

Siegel will hold a second day of auctions at World Stamp Show-NY 2016, the only firm to do so, with its annual springtime Rarities sale on Tuesday, May 31. A preview of the Walske and Rarities sales will appear in Linn’s next week.