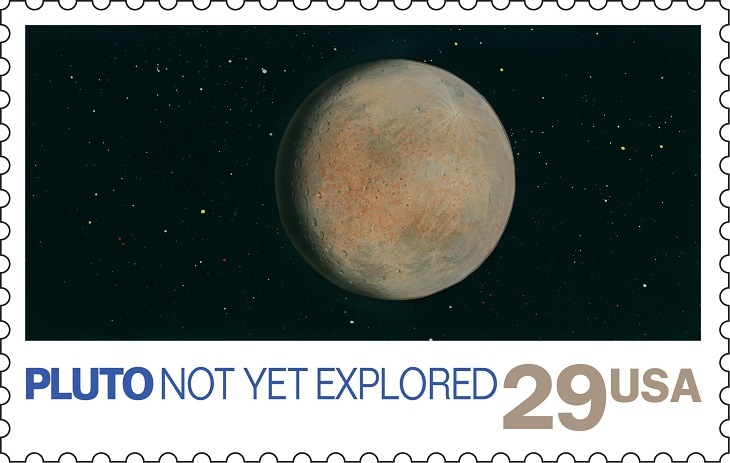 The 1991 Pluto: Not Yet Explored was issued before the planet was explored. It's now considered a 'dwarf planet' in the astrology industry. (Image courtesy of NASA/USPS)

The Facebook Live video is up and streaming right now. Check it out below.

To Pluto and beyond!

The United States 1991 29¢ Pluto: Not Yet Explored stamp has been credited with setting a Guinness World Record for the longest distance traveled by one stamp and will take its place in Guinness Book history during a ceremony Tuesday morning that anyone with a Facebook account can watch live.

The stamp was launched into space on Jan. 19, 2006, aboard one of the fastest rockets ever built, the New Horizons spacecraft. Its 9.5 year trek to Pluto reached 36,000 mph during the July 14, 2015, flyby. In all, it traveled 3 billion miles to get to Pluto and will likely travel another billion miles as New Horizons continues toward the Kuiper Belt.

To put in perspective the speed of the spacecraft, it took three days for Apollo 11 to reach the moon. New Horizons passed it in nine hours.

Linn’s wrote about the Pluto flyby last summer, and how the stamp was a motivator for the scientists who built New Horizons.

“It was my idea to send it,” New Horizons Principal Investigator Alan Stern told Astronomy magazine. “For many years, people had waved that stamp around as sort of a call to arms — as a motivating graphic — ‘Not yet explored.’”

Well, the stamp’s motto is now out of date, and it’s time to celebrate the record it has set.

The Guiness World Record event will be broadcast on Facebook Live for those who aren't able to attend the event at the U.S. Postal Service Headquarters in Washington, D.C.

Also can be viewed here on the USPS Facebook page.