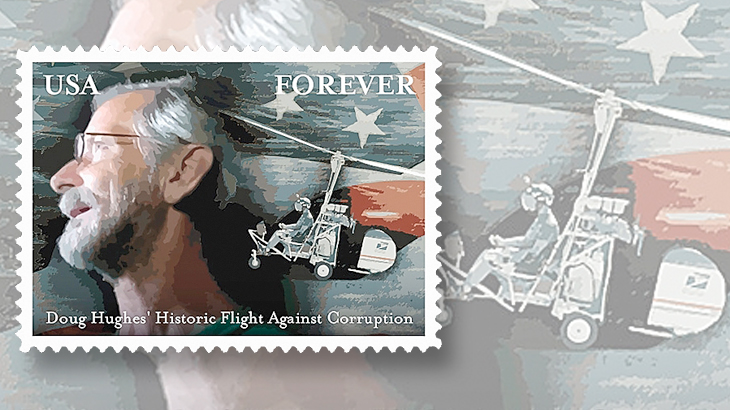 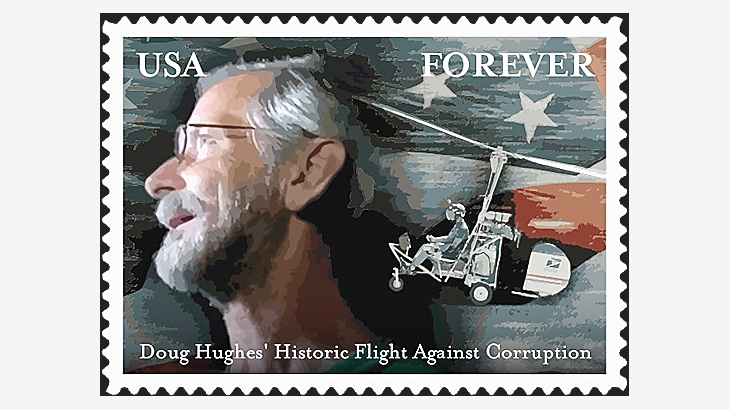 This stamp design is fake, but the possibility of a trial for Doug Hughes, the former U.S. Postal Service worker who flew a gyrocopter onto the grounds of the U.S. Capitol, is all too real.
Previous
Next

The former United States Postal Service worker from Florida who landed a tiny gyrocopter at the U.S. Capitol April 15 seems likely to face a trial on charges growing out of the incident.

Lawyers told a judge July 22 that Douglas Hughes, 61, had rejected an offer of a 10-month prison sentence over his celebrated protest that showed Washington’s vulnerability to small aircraft.

“It appears we’re on a path for trial,” agreed District Judge Colleen Kollar-Kotecky.

According to a Washington Post account of the hearing, prosecutors had said they offered the 10-month sentence if Hughes would plead guilty to a felony, operating his small aircraft without the required registration, and a misdemeanor, violating restricted federal airspace.

Hughes wanted a sentence of less than six months, or to be allowed to serve some of the sentence at home or on community release, a prosecutor said.

“Mr. Hughes wants to accept responsibility, but the government is making it very hard to do that,” said Tony W. Miles, a lawyer representing Hughes.

Hughes, who was fired by the Postal Service after the incident, said he made the flight to protest the failure of Congress to enact laws restricting campaign giving by special interests.

Hughes has said he immediately surrendered peacefully after landing and harmed no one.

“I flew here because it was the only way I could come up with for the average person to be able to fight against billions of dollars of special-interest money,” he said.