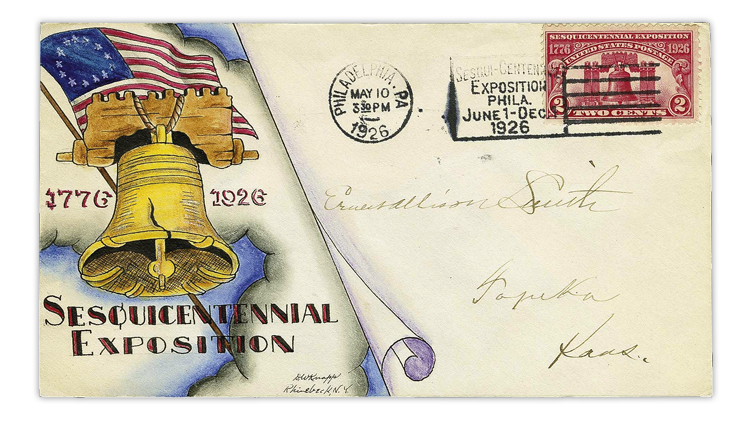 This 1926 first-day cover with a handpainted cachet by Dorothy Knapp will be offered during the Nov. 12-16 auction series by H.R. Harmer.

Between Nov. 12 and 16, H.R. Harmer will present a series of general and specialized public auctions at two different metropolitan New York venues.

The series opens in Manhattan on Tuesday afternoon at the Collectors Club, 22 E. 35th St., with part 1 of the Bill Byerley collection of Nicaragua. That auction will be followed on Wednesday and Thursday by a general sale of United States, British Commonwealth and worldwide stamps, covers and collections at the same location.

On Saturday, H.R. Harmer will offer part 1 of the Eldon Mohler collection of U.S. illustrated first-day covers, a sale taking place at the Hilton Meadowlands Hotel, 2 Meadowlands Plaza in East Rutherford, N.J., in association with the Nojex/ASDA Postage Stamp Show.

The first part of the Mohler collection auction offers about 150 covers by prominent cachet artist Dorothy Knapp, including a set of 12 for the 12 stamps in the 1932 Washington Bicentennial issue (Scott 704-715).

The first item in this sale, described as unique by H.R. Harmer, is an FDC for the 1926 2¢ Sesquicentennial Exposition stamp (Scott 627) featuring a handpainted Knapp cachet that includes the Liberty Bell and the Francis Hopkinson circle of stars flag in its design.

The stamp is postmarked on its day of issue with a May 10, 1926, slogan cancel celebrating the upcoming expo.

Additional sales from the Mohler collection are planned for 2020.

First-day covers are also featured in one section of the general sale, offering a selection of nearly 50 illustrated covers by Karl Lewis. An American living in Japan during the first half of the 20th century, Lewis created and sold his attractive handpainted cacheted covers to collectors in America and elsewhere.

Many of the covers offered are FDCs or are postmarked with Japan’s handsome commemorative datestamps. Some of the covers were prepared from other locations, including Netherlands Indies, Fiji, Tonga and more. All feature the delicate artwork characteristic of Lewis covers.

Hundreds of lots from the general sale offer U.S. stamps and covers from the 19th and 20th centuries, including modern errors up to the 2018 Dragons forever stamps, available with shifted die cuts causing an imperf strip of four (Scott 5310b).

A nice selection of U.S. postal stationery items includes three examples of the scarce 1902 1¢ black on buff William McKinley with full face portrait (Scott UX17). One card is unused and not preprinted with a mailing address, one is unused and preprinted, and the last is a used preprinted card.

The British Empire material includes numerous essays among the many stamps and covers. One essay from New Zealand is a signed drawing on bristol board by artist James Berry of a proposed King Edward VIII ½-penny stamp in pencil and ink. New Zealand never did issue a definitive stamp for Edward as king because of his decision to abdicate.

The auction of the Nicaragua collection built by Bill Byerley is also the first in a planned series. Part 1 includes many early issues as stamps and on covers, as well as essays and proofs, errors, postal cards and stamped envelopes, specialized collections and more.

Details of the upcoming auctions are posted on the H.R. Harmer website.