Glimpse of Hawaiian park on new stamp in June 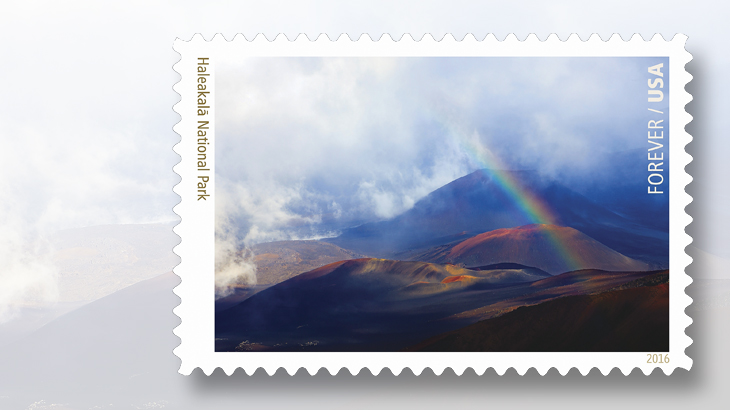 Kevin Ebi's photograph from Haleakala National Park in Hawaii appears on a forever stamp that will be issued in June.

A forever stamp picturing a rainbow across the volcanic landscape of Haleakala National Park on the Hawaiian island of Maui will be part of the 16-stamp set planned to honor the 100th anniversary of the National Park Service in the United States.

The stamp set will be issued June 2 during World Stamp Show-NY 2016, which is taking place from May 28 to June 4 at the Javits Center in New York City.

This year also marks the 100th anniversary of Haleakala National Park, which was established as part of Hawaii National Park in 1916. The park today is described by the National Park Service as an international biosphere reserve that supports native ecosystems in a maturing volcanic landscape. The park covers 30,183 acres of public land that ranges from sea level to 10,023 feet above.

Since April 4, the U.S. Postal Service has revealed 10 designs that will appear on stamps in the National Parks set.