Handstamped date on back of Washington stamp explained 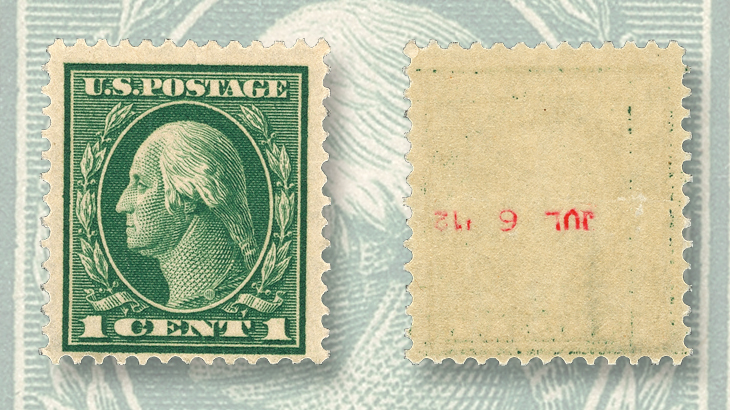 Shown back and front is a mint 1¢ green George Washington stamp with a small date handstamped on the reverse. Wayne Youngblood suggests that the stamp was used in place of coins to pay a debt by mail.

About a year ago, I asked in the U.S. Stamp Notes column if any Linn’s reader could explain the date “JUL 6 ’12” handstamped in red on the back of the mint 1¢ green George Washington stamp (Scott 498), shown here front and back.

David Trutwin responded with this plausible theory, “I believe this was put on by a collector as the date when the stamp was purchased.”

Wayne Youngblood provided a more complex explanation that also has merit: “Back in the day, when stamps were used much more as currency, instead of sending coins in the mail, businesses often encouraged customers owing small amounts of money to pay with mint stamps instead. The businesses often stamped the backs of incoming stamps — primarily to record payment and mark the stamps as company property.

“The stamps usually were used by the company at a later date, after accounting had taken place. Over the years I‘ve found maybe 3-4 of these (and have seen maybe a couple of more); almost always on very low denominations.

“They are usually heavily discounted because of the ‘ink inclusion.’”