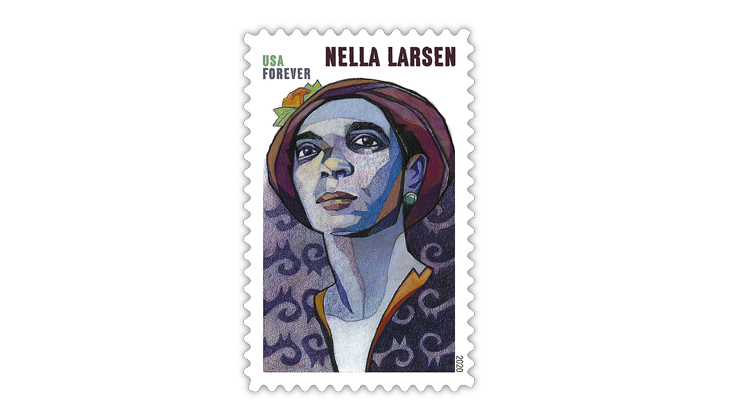 Nella Larsen is one of four individuals honored on the new United States Voices of the Harlem Renaissance set of four stamps. Larsen wrote two novels examining the question of racial identity. 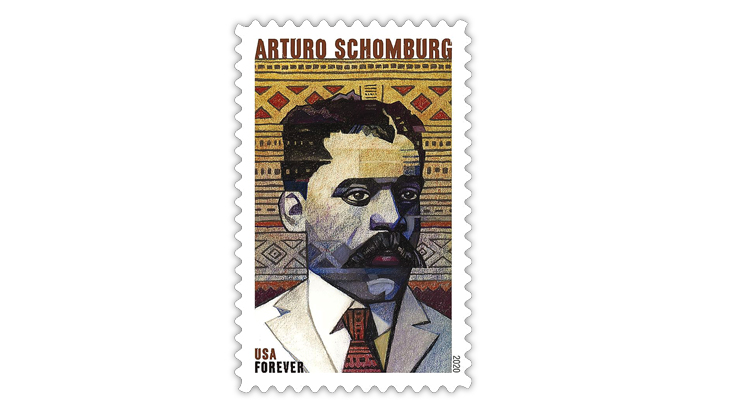 Arturo Alfonso Schomburg, a self-taught historian, is remembered today for his documentation of black culture from around the world. His collection is now part of the New York Public Library’s Schomburg Center for Research in Black Culture. 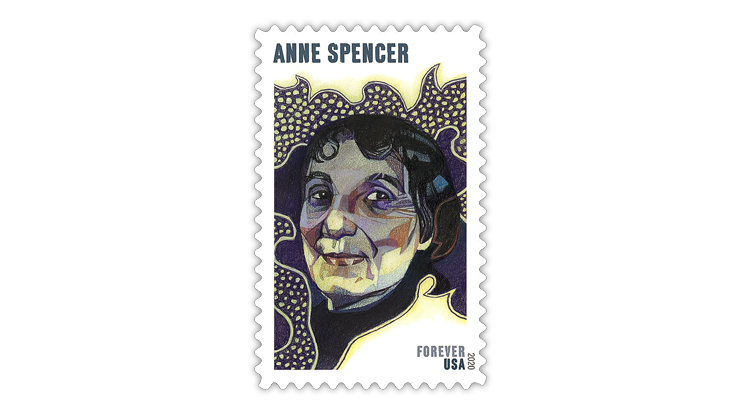 Though she lived and worked in Virginia, poet Anne Spencer is considered an integral part of the Harlem Renaissance of the 1920s and befriended many of the movement’s leaders. 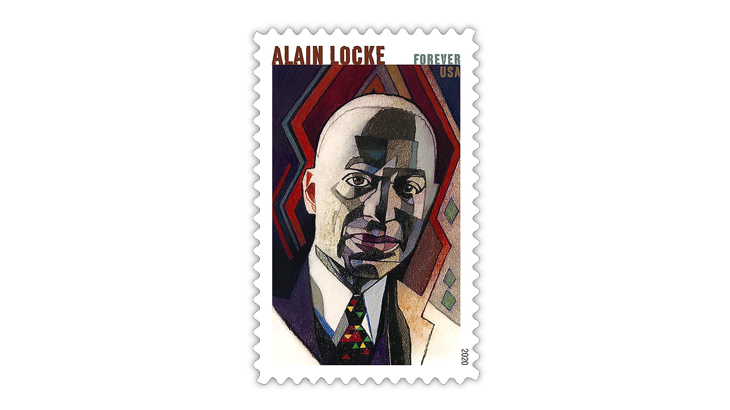 Alain Locke has been referred to as the dean of the Harlem Renaissance, for his support of many young writers and artists. 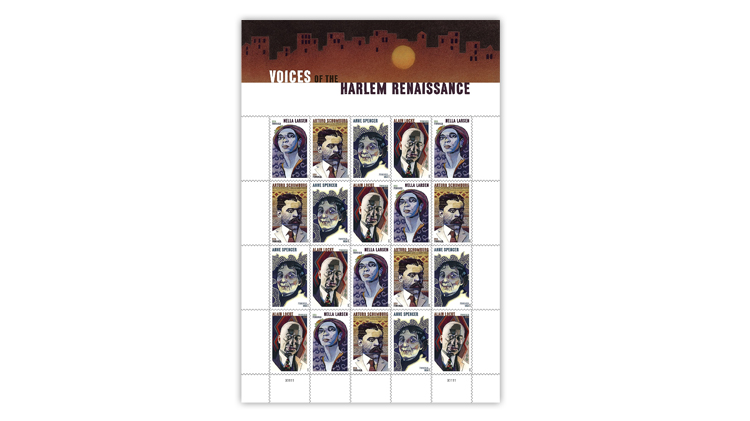 Each stamp appears five times in a pane of 20 with a decorative header that spells out the name of the set: Voices of the Harlem Renaissance. 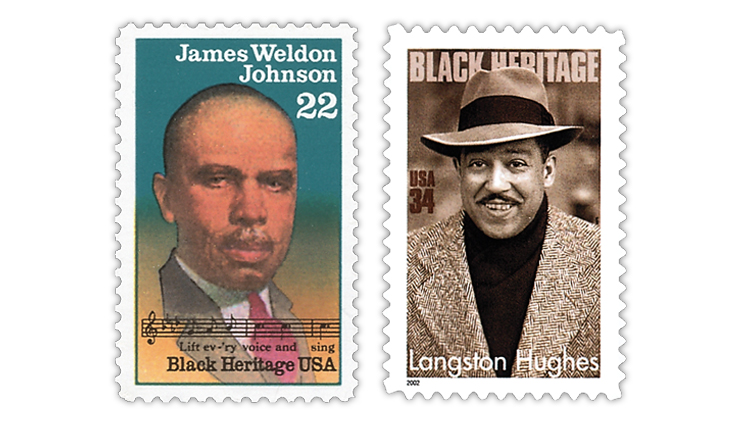 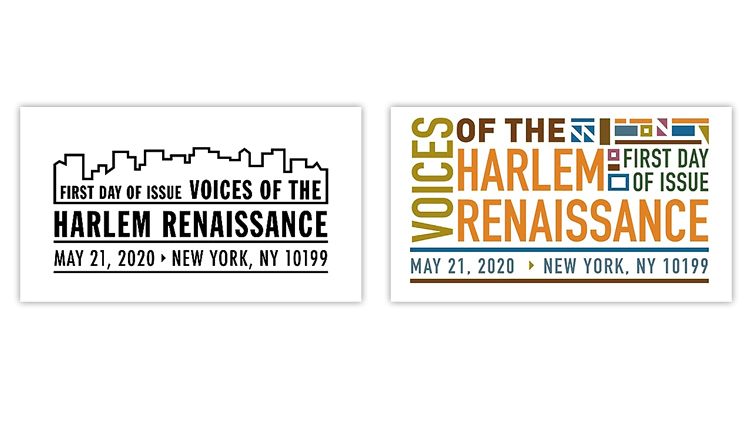 The Postal Service prepared two first-day cancels with graphic elements to celebrate the new set of four Voices of the Harlem Renaissance stamps.
Previous
Next

Important cultural and literary voices that sounded 100 years ago from the Harlem neighborhood in New York City quickly grew into a much broader movement of identity known today as the Harlem Renaissance.

Writers, artists, musicians and others celebrated black life and culture with their creativity and would contribute groundwork for emerging civil rights efforts.

With a new set of four stamps identified as Voices of the Harlem Renaissance, the United States Postal Service pays tribute to this movement and to four individuals whose writings personify and preserve it.

Issued May 21 in a pane of 20, the four nondenominated (55¢) forever stamps honor novelist Nella Larsen; bibliophile and historian Arturo Alfonso Schomburg; poet Anne Spencer; and writer, philosopher, educator and arts advocate Alain Locke, who is known as the dean of the Harlem Renaissance.

“The stamps feature stylized pastel portraits of the four honorees that incorporate African-inspired motifs as background elements,” according to the Postal Service. “The design elements reflect the increased interest in African culture, history, and aesthetics shown by the writers and artists of the Harlem Renaissance.”

The pane of 20 includes a decorative header which shows a cityscape in silhouette with a sun in its midst. Block lettering spells out the title of the issue, “Voices of the Harlem Renaissance.”

Plans for a New York City first-day ceremony for the new stamps were canceled April 15 to conform to social distancing guidance during the coronavirus COVID-19 outbreak. The Postal Service has indicated that dedication ceremonies might be scheduled in the future for some commemorative stamps that have been issued this year without ceremonies.

“This issuance celebrates one of the great artistic and literary movements in American history, the Harlem Renaissance of the 1920s, which firmly established African Americans as a vital force in literature and the arts,” the Postal Service said in announcing the new stamps.

According to the Smithsonian’s National Museum of African American History and Culture, the Harlem Renaissance united diverse art forms such as poetry, prose, painting and music into a realistic presentation of what it meant to be black in America.

Many leading figures associated with the Harlem Renaissance have been honored on U.S. commemorative stamps in years past.

Writer, editor and social reformer W.E.B. DuBois, who appeared on a 29¢ stamp in 1992 (Scott 2617), expanded the audience for many of the movement’s great writers and artists through the magazine The Crisis, which he founded and edited for the National Association for the Advancement of Colored People (NAACP).

James Weldon Johnson also brought together important writings of the era and contributed his own poetry and lyrics. Johnson was honored on a 22¢ stamp in 1988 (Scott 2371). Among the many other writers, artists and musicians of the Harlem Renaissance who have been featured on U.S. stamps are Langston Hughes, Zora Neale Hurston, Duke Ellington, Paul Robeson, Louis Armstrong, Eubie Blake, Romare Bearden and Lena Horne, to name only a few.

Nella Larsen (1891-1964), a writer honored on one of the new stamps, published two novels examining the question of racial identity, including the semiautobiographical Quicksand (1928). Like Larsen, the novel’s main character Helga Crane is the daughter of a white Danish woman and a West Indian black father. Larsen’s second novel, Passing (1929), tells the story of two women of mixed-race heritage, friends whose lives take very different turns.

Arturo Alfonso Schomburg (1874-1938) was a self-taught historian who cofounded the Negro Society for Historical Research, collecting and documenting the contributions of writers and artists of African heritage. The New York Public Library’s Schomburg Center for Research in Black Culture was established from Schomburg’s extensive collection.

Poet Anne Spencer (1882-1975) lived in Virginia but was friends with Harlem Renaissance writers Hughes, Du Bois and Johnson, according to the Poetry Foundation, which noted that her poetry “engages themes of religion, race, and the natural world.” Her first publication was the poem Before the Feast at Shushan in the February 1920 issue of The Crisis.

“Locke wrote and edited some of the most significant publications of the movement,” according to the Postal Service, “and he played a leading role in supporting and promoting writers and artists.”

The Voices of the Harlem Renaissance stamps will be sold only in full panes of 20 at post offices.

Two pictorial first-day cancels have been created that reflect some of the graphic elements of the stamps and the stamp pane.

The black first-day cancel includes a line design that resembles the city skyline printed across the top of the stamp pane.

The color postmark shares the earth tones color scheme of the Arturo Schomburg stamp, with geometric pattern elements as accents.