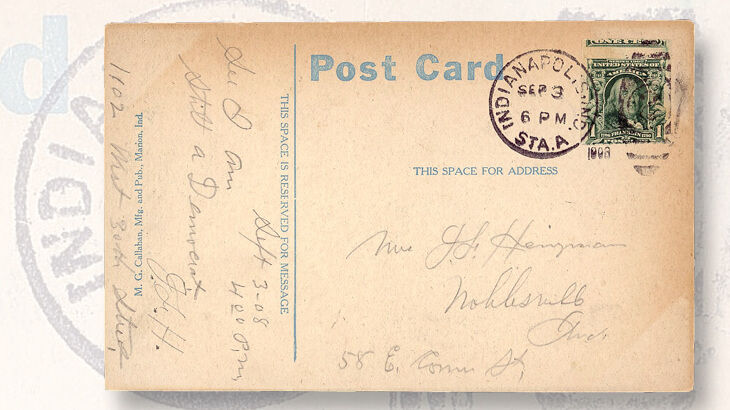 The Harmer-Schau public auction will be held Aug. 4-6 at the same location.

The auction offers United States and worldwide stamps and postal history, as well as U.S., worldwide, and foreign country collections.

Collectors will find China with People’s Republic, France, Germany, a special delivery exhibit collection including Panama-Pacific small die proofs, other back-of-the-book material, and much more in the Aug. 4-6 auction.

A featured item in this sale is the new discovery of a Parkhurst 1¢ vending coil used on a picture postcard, described by Harmer-Schau as “the only certified Scott 314V and Parkhurst coil on cover.”

Scott 314V is identified in the Scott Specialized Catalogue of United States Stamps and Covers as the 1908 1¢ blue-green Benjamin Franklin stamp as an imperforate flat plate vertical coil stamp. The stamp is among those issued for a postage machine vending competition sponsored by the U.S. postmaster general.

Harmer-Schau reports that Layton Parkhurst invented his vending machine in early 1908 in Indianapolis and entered the Post Office Department’s competition.

The cover bearing the single stamp was mailed in Indianapolis in 1908 with a Sept. 3 Station A duplex cancel.

The 2015 Philatelic Foundation certificate states: “It is a genuine usage, with four tiny indentations at the bottom of the stamp made by the ‘pin perforators’ of the Parkhurst vending machine.”

The vending perforation holes can be distinctly seen both at top and bottom, according to Harmer-Schau.

The international offerings in this auction include a used example of China’s withdrawn 1968 8-fen The Whole Country is Red stamp (Scott 999A).

For additional information about this sale contact Harmer-Schau, e-mail info@harmerschau.com, or telephone 707-778-6454.