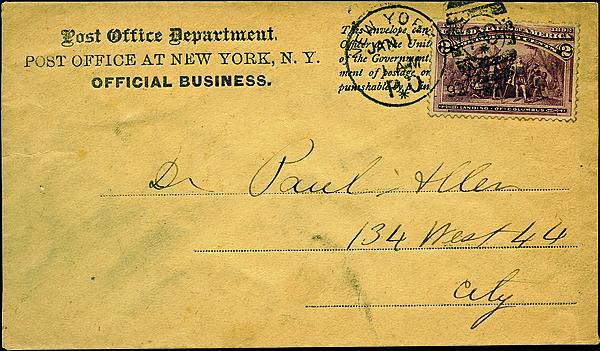 The Harmer-Schau auction includes a first-day cover of the United States 1893 2¢ Columbian on a Post Office Department Official Business envelope.

Two rare British Commonwealth stamps, an 1888 surcharged 1-penny on 2½d issue of St. Christopher and a 1918 provisional issue of Bechuanaland Protectorate, will be offered by Harmer-Schau during its APS Stampshow auction Aug. 21-23.

Two British Commonwealth rarities and a new American first-day cover find are among the many stamps and postal history items offered by Harmer-Schau Auction Galleries in the firm’s Aug. 21-23 public auction.

The sale will take place as part of the American Philatelic Society’s annual Stampshow, at the Connecticut Convention Center in Hartford.

Details of the show can be found in this issue on page 20.

The British Commonwealth collection of David B. Markowitz will be auctioned beginning at 5 p.m. Thursday.

Additional Commonwealth and worldwide material will be offered Friday, and United States and worldwide stamps, postal history and collections will be hammered down Friday evening and Saturday.

The stamp (St. Christopher Scott 23) is one of about five mint examples known, according to the auction description, and one of those stamps has been regummed.

Certified by the Royal Philatelic Society London in 1963, this mint stamp is described as having a bright fresh color.

Even fewer mint examples are known of the 1918 surcharged Bechuanaland Protectorate £5 on 1-shilling postal fiscal stamp (Scott AR2), and the example offered in the Harmer-Schau auction is the only one of the three known that is currently available to the public.

The other two examples are held by the government of Botswana and the British Library.

This new discovery was found and identified by longtime Canadian stamp dealer Richard McDonald in a small collection of British Africa stamps he purchased some years earlier.

He arranged with Chris Harmer to have the stamp authenticated by the British Philatelic Association, a process that took about six months, McDonald told Linn’s Stamp News.

“It took longer than usual, as this was the first example of this stamp they had ever certified,” McDonald said.

The wartime provisional was created during the reign of King George V, and while the high value stamps inscribed “Postage & Revenue” were most commonly used for revenue purposes, “it is generally accepted that £5 was the highest denomination actually used for postal purposes,” the auction description notes.

Among the U.S. items scheduled for auction Friday evening is a Jan. 1, 1893, first-day cover of the 2¢ Columbian (Scott 231). The auction description identifies this cover as a new find and the second recorded example.

The 2¢ stamp is affixed to a Post Office Department Official Business envelope and tied with a New York, N.Y., 1 a.m. Jan. 1 duplex postmark.

The cover has been authenticated by PSAG (Philatelic Stamp Authentication and Grading Inc.) and is listed with an opening bid of $7,000 and an estimate of $10,000 to $15,000.

The cover is listed among a selection of unused and used Columbian issues in singles and blocks, ranging from the 1¢ to the $5 values.

Individual lots for this sale can be viewed at www.harmerschau.com, where online bidding is also taking place.