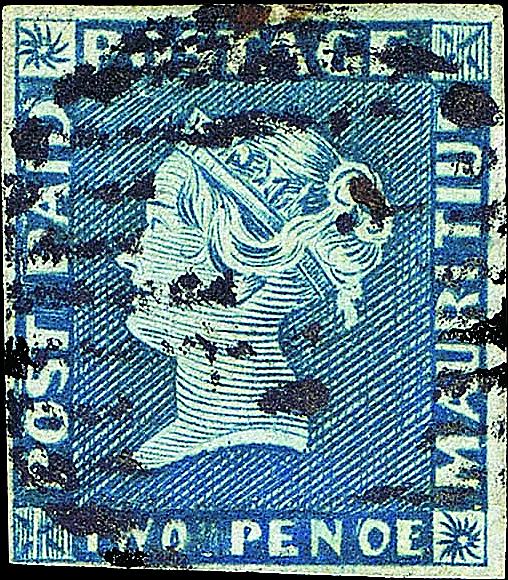 A key classic variety of the issues of Mauritius, the 1848 2-penny dark blue with “PENOE” inscription, will be auctioned. 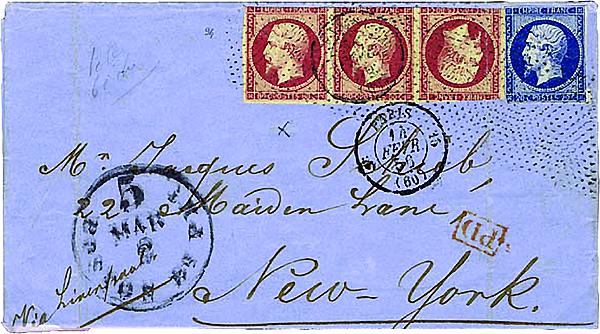 An 1856 French cover franked with four of the 1854 Napoleon issues, including a tete-beche pair, is among the items offered during the Harmers International Sept. 10 auction in New York City.

The auction begins with classic United States stamps and postal history, including carriers and local stamps on cover.

Also on offer is a selection referred to as the Deep Freeze collection, primarily U.S. sheets that suffered water damage from a burst pipe.

“The majority of sheets were stored vertically in sheet albums and the water affected almost entirely the bottom two rows leaving the top eight rows totally unaffected,” according to the auction description.

The Fleur de Lys collection includes selections from an exhibit of postal history of the 1849-75 Ceres and Napoleon issues of France, with domestic usages, military and war expeditions (including Ballon Monte covers and Siege of Paris smuggled mail), foreign mail, foreign usages and mixed frankings.

Among the many appealing covers up for auction is an 1856 folded letter sheet mailed with the 1854 Napoleon III imperforate 80-centime lake-on-yellowish stamp in a strip of three with a tete-beche pair (Scott 19a). A lozenge of dots cancel ties the strip and an additional 20c blue stamp (15) on the cover from Paris to New York.

The cover is marked with a circular datestamp and red boxed “PD,” a “5 BOSTON BR. PKT. MAR 2” transit marking and manuscript “via Liverpool.”

Only tete-beche pairs are believed to be recorded on cover, according to Harmers International. With a 2006 Roumet certificate, the cover is offered with a presale estimate of $42,500.

The auction’s selection of worldwide stamps includes a used early impression of the 1848 2-penny blue Queen Victoria stamp from Mauritius, with the “PENOE” inscription variety instead of the normal “PENCE” (Scott 4e).

Formerly in the Dale-Lichtenstein collection, the stamp is described as having good margins to clear at bottom left, a light bar cancel, and a surface scrape in the top margin that is not mentioned in the Royal Philatelic Society certificate. It is listed in the auction catalog with a $14,500 estimate.