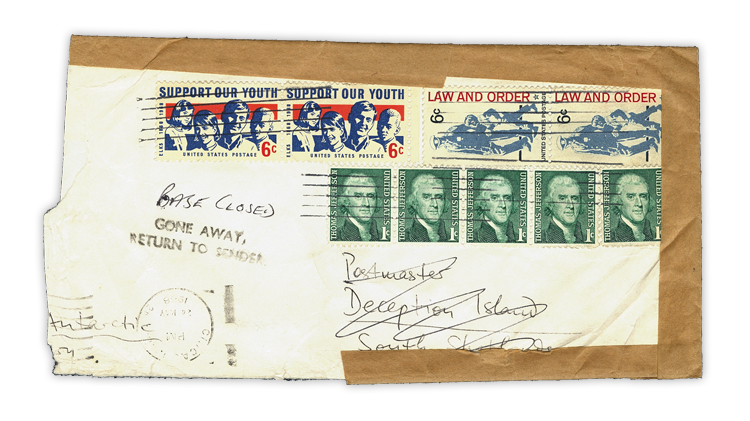 Deception Island, part of the South Shetland chain close to the Antarctic Peninsula, was formed by an active volcano that has been dormant since 1970. But eruptions in 1967 and 1969 destroyed scientific stations, resulting in the island being abandoned. T

Have you ever heard of Deception Island? Me neither. But it turns out to be a real place in the South Shetland Islands, close to the Antarctic Peninsula.

Our philatelic evidence is the cover shown here that was sent from Chicago to the postmaster on Deception Island on May 24, 1968.

An active volcano, the island is roughly circular in shape with a flooded caldera in the center and a natural harbor. At one time a whaling station, the island is now a tourist destination and scientific outpost, with Argentine and Spanish research bases. It is administered under the Antarctic Treaty System.

The volcano seriously damaged local scientific stations in the late 1960s, resulting in the island being abandoned for several years. The volcano has been dormant since 1970.

The cover has a backstamp dated Jan. 2, 1969, at Port Stanley, Falkland Islands, where presumably the front was marked “Base Closed Gone Away, Return To Sender.”