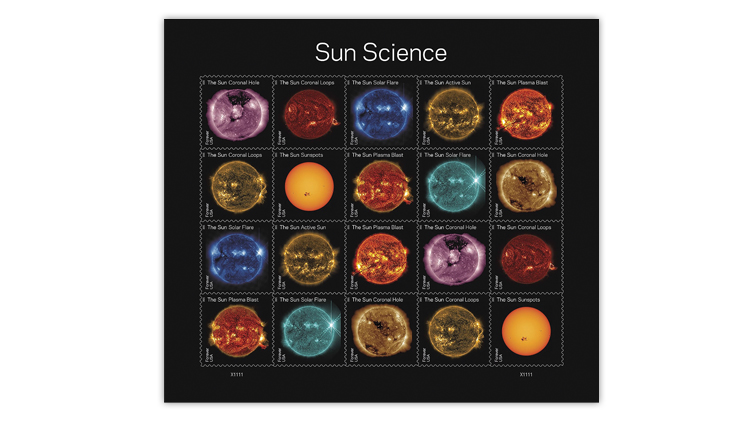 The pane of 20 Sun Science forever stamps illustrates various solar events with 10 different designs. The stamps are also being sold in a limited number of uncut press sheets of 120 stamps, either with die cuts or without, for $66.

One of this year’s more dramatic stamp issues from the United States Postal Service will arrive June 18.

The pane of 20 Sun Science forever stamps pictures scientific features of Earth’s sun with 10 different designs (each appearing twice in the pane).

The background of each nondenominated (55¢) stamp and the borders of the pane are all printed in black. Each stamp reproduces a digital photograph of the full sun as taken from the NASA Solar Dynamics Observatory, which has been in geosynchronous orbit around Earth since 2010.

A NASA website dedicated to the solar mission can be found online.

“Each of these stunning photos has been colorized by NASA to correspond with the wavelengths that reveal specific features of the sun’s activity,” the Postal Service reported.

Stamp printer Banknote Corporation of America added highlights by applying foil stamping to the flexographic-printed illustrations and the inscriptions.

The result is a striking array of images on the pane illustrating solar flares, plasma blasts and more.

Along with the 20-stamp pane, a limited number of press sheets for the Sun Science set will be offered as well. Two varieties of press sheets — one with the die cuts that separate individual stamps and one without die cuts — can be ordered from the USPS Postal Store.

On the day of issue, the Postal Service will accept credit card orders for press sheets by telephone at 844-737-7826.

All U.S. press sheets offered so far this year have sold out quickly, often on the day of issue.

The Sun Science press sheets are priced at $66, indicating six unsevered panes of 20 stamps on each sheet.

The designated first-day city for the new set is Greenbelt, Md., about 30 minutes from Washington, D.C., and home to the NASA Goddard Space Flight Center, which manages the Solar Dynamics Observatory.

To read more about the Sun Science stamps, subscribe to Linn’s Stamp News.