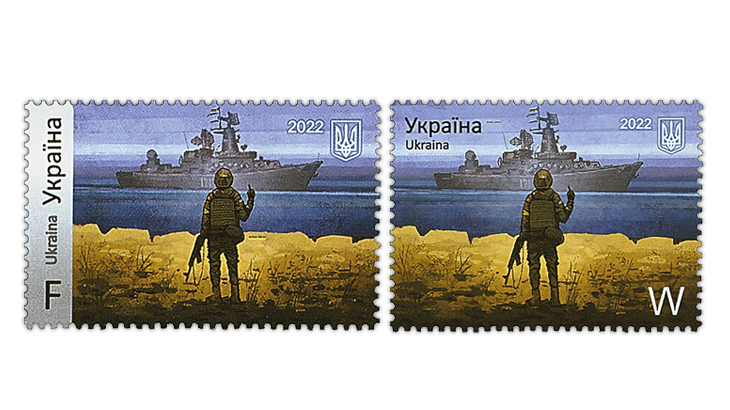 The 2022 Ukraine stamps commemorating the defenders of Snake Island are in high demand and selling at very high prices.

On April 12, 2022, Ukraine issued two stamps commemorating the defiance of the Ukrainian defenders of Snake Island in the face of the overwhelming firepower of the Russian Black Sea Fleet (Scott 1338-1339).

The stamp design by Boris Groh, which was used for both stamps, was chosen by a public vote in a contest arranged by Ukraine’s postal service, Ukrposhta. The design shows a Ukrainian soldier on the beach at Snake Island offering a middle finger salute to a Russian warship in response to the Russian demand that the island defenders surrender.

These are not rare stamps, as the combined print run for both issues was at least 1 million. However, they sold out quickly and have been the subject of rampant speculation. Many of the people who bought these stamps were not traditional stamp collectors.

Most of the stamps were sold inside Ukraine, much to patriotic noncollectors who often stood in long lines to buy them. Dealers outside Ukraine had a hard time getting them. Even the loyal American agent for Ukrposhta had his order cut by 90 percent to 95 percent.

The Scott Standard Postage Stamp Catalogue does not value either stamp in mint, never-hinged or in used condition. Retail prices are about $50 for the set of two stamps. At least one retail stamp dealer is offering the set of two mint stamps for $89.

Single mint stamps are being offered online for $20 or more.

Mint panes are on offer for $100 to $150. There is some demand for mint panes of six, although most buyers are happy to settle for a set of single stamps, especially at the prices that the panes are being offered.

Look for prices to eventually come down as more stamps find their way into the market and saturation sets in. If you have these stamps to sell, now would be a good time to offer them.