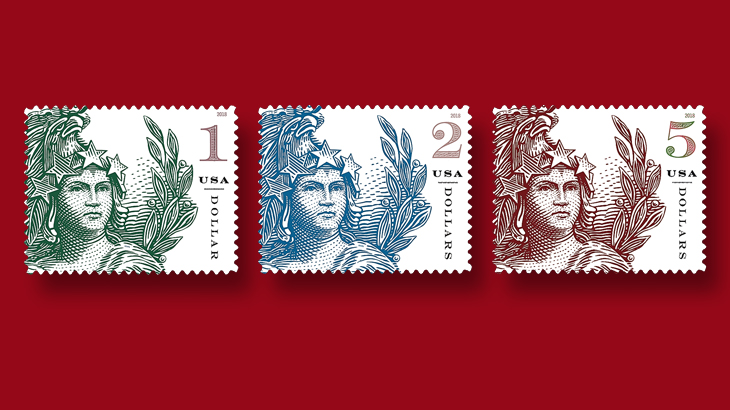 Three new United States stamps will be issued June 27 featuring the statue of Freedom from the U.S. Capitol Dome. The intaglio-printed stamps are denominated $1, $2 and $5. 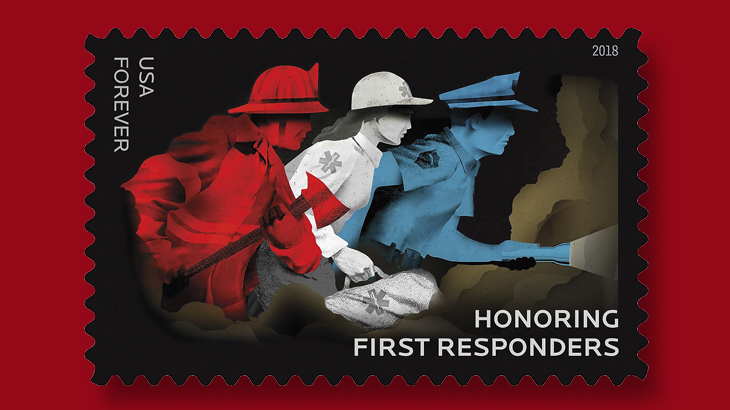 A United States forever stamp honoring first responders will be issued in 2018. The figures in the design represent a firefighter, an EMS worker and a law enforcement officer.
Previous
Next

Denominated $1, $2 and $5, the three stamps each feature the same illustration of the statue of Freedom from the top of the U.S. Capitol dome.

The illustration is nearly identical to the vignette designed by Clair Aubrey Huston and engraved by John Eissler for the $5 carmine and blue Head of Freedom Statue stamp issued in 1923 (Scott 573).

The portrait on the new $1 stamp is emerald green, the $2 is indigo, and the $5 is brick red. A large numeral of denomination in the upper right corner appears to be in multiple colors on the $5 stamp, and a single pink color on the $1 and $2 stamps.

A new nondenominated (50¢) forever stamp honoring first responders was also revealed, although no issue date has been announced.

The single commemorative stamp recognizes the men and women who respond to critical situations with skill, dedication and uncommon bravery, according to the Postal Service, including firefighters, law enforcement officers and emergency medical service professionals.

Three figures shaded in red, white and blue, respectively, are arranged in action facing right against a dark background, with text at lower right that reads “Honoring First Responders.”

Issue dates were also reported for several 2018 stamps whose subjects were announced previously.

The O Beautiful set of 20 forever stamps will be issued July 4 in Colorado Springs, Colo. The 20 designs reflect phrases from the song America the Beautiful, including spacious skies, amber waves of grain, purple mountains and shining seas.

The single World War I Turning the Tide forever stamp will be issued July 27 in Kansas City, Mo.

Las Vegas, Nev., is the planned site for the Aug. 7 first-day ceremony for The Art of Magic, a set of five designs celebrating the art of magic with digital illustrations.

The forever stamp honoring musician John Lennon in the Music Icon series will be issued Sept. 7 in New York City. The single design will be printed in four different color varieties on the 16-stamp pane.

The Birds in Winter forever stamps will be issued Sept. 22 in Quechee, Vt., which is home to the Vermont Institute of Natural Science Nature Center. The graphic illustrations on the four stamps show four birds commonly seen in winter: the black-capped chickadee (Poecile atricapillus), the northern cardinal (Cardinalis cardinalis), the blue jay (Cyanocitta cristata), and the red-bellied woodpecker (Melanerpes carolinus).