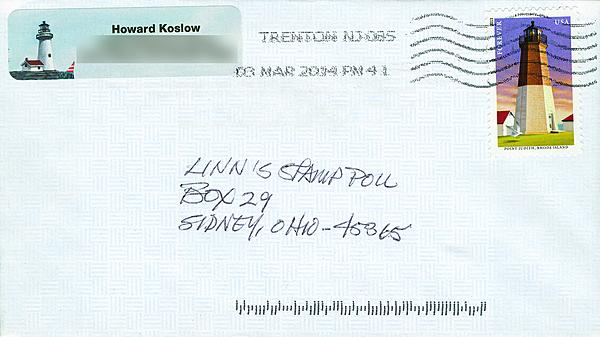 We are pleased to bring you the results for Linn’s 2013 United States Stamp Popularity Poll. Senior editor Jay Bigalke presents the winners and analyzes the numbers in his report beginning on page 1.

While sorting through some of the poll entries, Bigalke pointed out to me the envelope of Howard Koslow, shown nearby, who designed the 2013 Lighthouses stamps.

As you might expect, Koslow selected the stamps he designed as his favorite issue of 2013. He even franked the envelope with a Point Judith Lighthouse stamp; notice, also, that his return address label also depicts a lighthouse.

In the more than 15 years that I’ve followed our annual poll, I’ve been most impressed with Linn’s readers’ commitment and devotion to stamps that reflect the history of our great nation.

The Made in America stamps are superb reflections of the explosive industrial growth that swept the country in the early 20th century.
Stark black-and-white photos capture men and women engaged in the rigors of labor that were required to erect the massive infrastructure that fueled the engine of productivity. From coal miners to textile workers, the best of American workers is on display.

Looking at these stamps, one can’t help but be impressed with the determination and grit of the generations that preceded us.

The Jenny Invert stamp also captured the attention of our readers, many of whom are familiar with the story of the legendary error and its discovery at a post office in Washington, D.C., after it was issued in 1918.

The nifty pane of six $2 stamps provides an inexpensive way to add an iconic stamp to one’s collection.

You might recall that we disagreed with the U.S. Postal Service’s decision to randomly place 100 upright Jenny Invert panes in the print run of 2.2 million panes.

Nonetheless, there is no denying that the ploy generated a great deal of favorable buzz for stamp collecting that extended well into the mainstream media. We collectors should celebrate such occurrences and seek ways to repeat them.

Linn’s readers also had the opportunity to cast their votes online at Linns.com. Unfortunately, we determined that there were a number of voting irregularities that prevented the inclusion of the online votes in the overall totals. Bigalke has the details in his story.

It’s worth remembering that our annual poll is not statistically valid. We provide it as a fun way for readers to express their views about the nation’s stamp program.

In that spirit, it is lamentable that some would choose to manipulate the numbers to make a point.

Take some time to look over the results. Did anything surprise you? Did your favorite pick win?

Please consider sharing your thoughts with us in a letter to Linn’s. We very much enjoy hearing from you, our readers.

In the meantime, you can look forward to the 2014 U.S. Stamp Popularity Poll, which will be announced sometime in December.