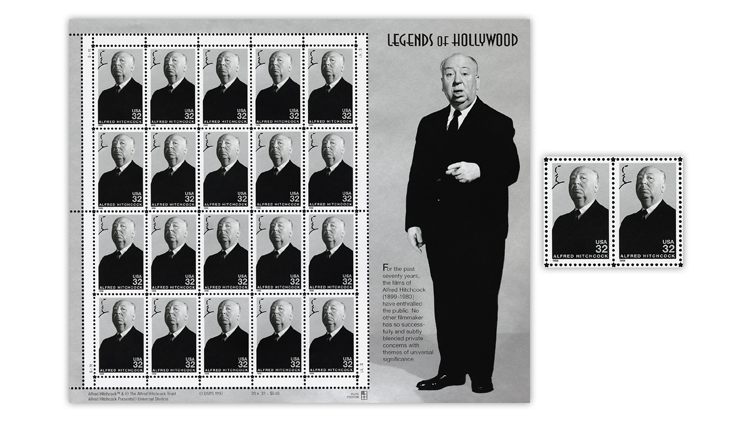 Figure 1. In 1998, the United States Postal Service honored Alfred Hitchcock on a 32¢ stamp in its Legends of Hollywood series. The stamp included two special security features: his laser-cut image in the upper left corner of each stamp, and the star perf 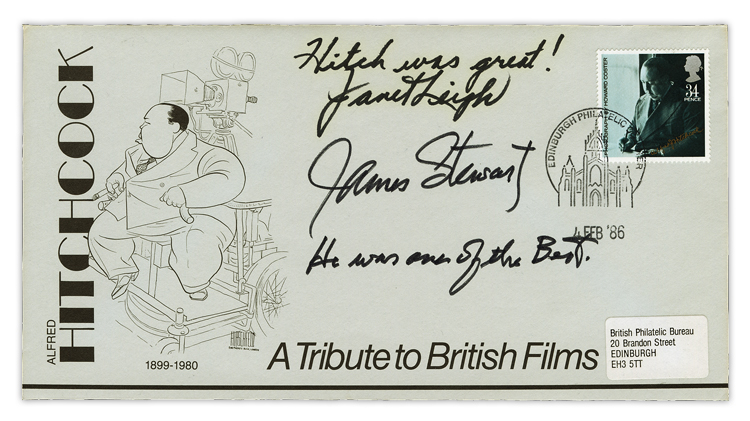 Figure 2. Hitchcock, who was born in England, was commemorated on a stamp in Great Britain’s 1985 set honoring 20th-century stars and directors. This cover bearing the stamp was signed by Jimmy Stewart and Janet Leigh, two of the many stars who were featu
Previous
Next

The United States Postal Service honored Alfred Hitchcock, the British-born film director and producer whose name became synonymous with the word “thriller” when it came to movies, on the fourth stamp in its Legend of Hollywood series.

The Hitchcock stamp is in stark black and silver gray, creating an atmosphere not unlike the dark aftereffect of his films, which often played on the darkest fears in the human psyche.

The stamp also has two security features that can be seen in Figure 1: The perforations in the corner of each stamp in the pane are in the shape of a star, and there is a laser cut instantly recognizable as the head of the honoree in the upper left of each stamp.

The stamps were printed by a private contractor, American Packaging Corp., for Sennett Security Products.

Since U.S. commemoratives are seldom counterfeited, I think that the security features were done more to make the stamp interesting than to prevent counterfeiting.

The laser cut was likely expensive and was not used again on subsequent issues. The geometric perforations were used again, but not on the definitive stamps that are most often counterfeited.

As the pioneer of many film techniques that became standard after he introduced them, Hitchcock had well-earned the honor of being included in the U.S. Postal Service’s Legends of Hollywood stamp series and his informal title “the Master of Suspense.”

Hitchcock also has been honored on other postage stamps, including another one from the United States. He is pictured on a 44¢ stamp in its 2009 Early TV Memories pane of 20 (Scott 4414). That stamp commemorates the television series Alfred Hitchcock Presents.

Great Britain’s Royal Mail commemorated Hitchcock on the top value in its 1985 set of five stamps featuring 20th-century film stars and directors. Figure 2 shows a cover franked with this 34-penny stamp (Scott 1123) canceled in Edinburgh, Scotland, on Feb. 4, 1986, at an event to honor British filmmaking.

Hitchcock was born Aug. 13, 1899, in England, and began his career there, achieving considerable notoriety for both in silent films and talkies. In 1939, he was signed by David O. Selznick and moved to Hollywood. Although he maintained his professional ties to England and his British citizenship, southern California was home base for most of his work.