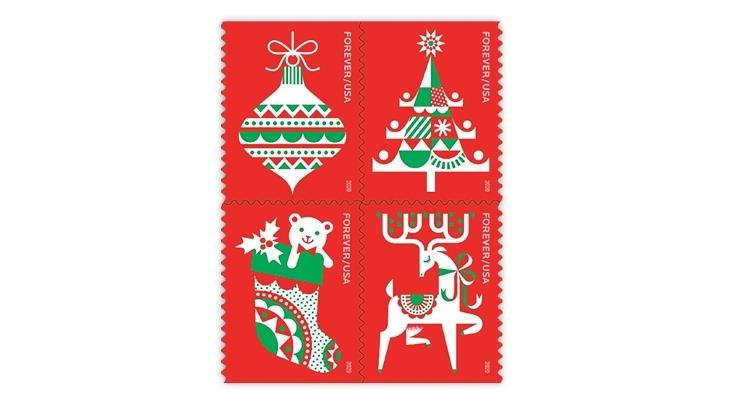 This year’s four contemporary Christmas stamps from the United States Postal Service feature an ornament, a Christmas tree, a holiday stocking and a prancing reindeer. The forever stamps will be issued in a double-sided pane of 20. 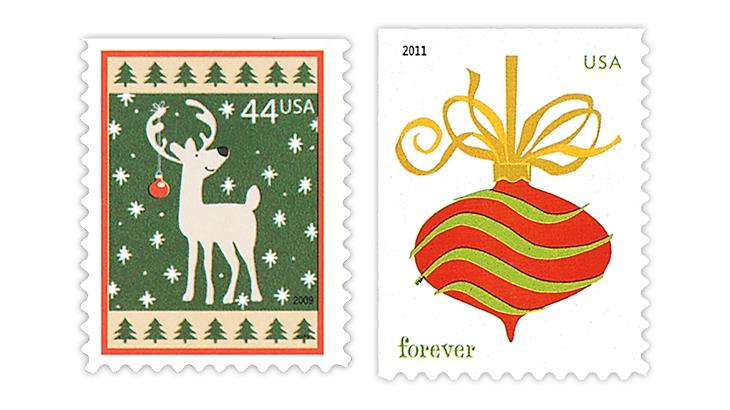 The holiday subjects shown on the new stamps reflect familiar themes that have appeared in different forms on U.S. stamps in the past. Examples include the reindeer from the 2009 Winter Holidays stamp set and an ornament with bow from the 2011 Holiday Bau 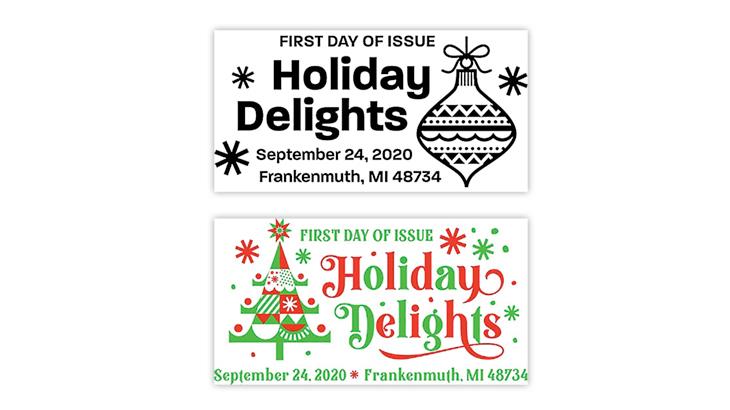 Two postmarks prepared for the Holiday Delights issue include the name of the stamp set and also a single element from one of the stamps: an ornament on the black postmark and the decorated tree on the color postmark.
Previous
Next

“These charming stamps will add a touch of whimsy to your holiday mailings,” according to the U.S. Postal Service, which will issue the stamps Sept. 24.

The nondenominated (55¢) forever stamps depict a cheery ornament hanging from a ribbon bow, a decorated Christmas tree topped with a star, a stocking holding a teddy bear and a sprig of holly, and a prancing reindeer also decorated with a ribbon bow.

Each element is shown against a bold red background with “FOREVER/USA” reading down from the upper right corner in white.

USPS art director Antonio Alcala designed the stamps, which will be sold in double-sided panes of 20, a format that the Postal Service describes as a booklet.

No publicly attended first-day ceremony will take place because of the ongoing COVID-19 pandemic, but Frankenmuth, Mich., has been designated as the official first-day city.

Located roughly 25 miles south of Saginaw Bay and 25 miles north of Flint, Frankenmuth is a town immersed in the Christmas spirit year-round, with a large and prominent Christmas retail store drawing tourists to what has been called “Michigan’s Little Bavaria.”

The reindeer illustration is featured within a sawtooth stamp frame on the site’s homepage, and all four illustrations appear in the same format on a page under the “Illustration” heading within the subject “Holiday.” These renderings do not have the “FOREVER/USA” inscription or the year date that appears at lower right on the advance stamp artwork displayed by the USPS.

Ulve also shows three other illustrations that look as though they could fit into the new stamp set.

In one, a bearded nutcracker soldier drums while performing a holiday dance. In another, a decorated partridge holds a sprig of winter berries in its beak. These illustrations are also shown on a red background with a sawtooth border.

A third image depicts a prancing pony similar to the stamp reindeer, but with a couple of decorated Christmas trees in the distance. This illustration substitutes a tan color for the white of the stamps.

Other whimsical images on the site stray from the Holiday Delights stamp format but include cityscapes, gift packages, a dachshund in the snow, and more.

Stamp illustrators seeking to capture the spirit of the Christmas holidays often return to familiar elements that will appeal to the Postal Service’s mailing customers.

Multiple U.S. stamps from the past have shown the subjects that appear on the new stamps, such as the 2009 Winter Holidays set (Scott 4425-4432), which included a stamp showing a reindeer surrounded by falling snow; and the 2011 Holiday Baubles set, which showcased different ornaments.

Christmas trees and holiday stockings have also been depicted on holiday stamps from the United States and other countries.

The Postal Service has prepared two first-day cancels for its new holiday stamp set. Each postmark includes a pictorial element that is fairly faithful to one of the new stamp subjects.

Along with the expected inscriptions “Holiday Delights” and the date and city of issue, the black postmark shows a holiday ornament hanging from a ribbon bow, and the color postmark includes the Christmas tree with a star perched on the top.

Up to 50 black postmarks can be requested on collector supplied envelopes at no cost. Digital color postmark requests require a fee of 50¢ per postmark with a minimum order of 10. Two test envelopes must be included as well.