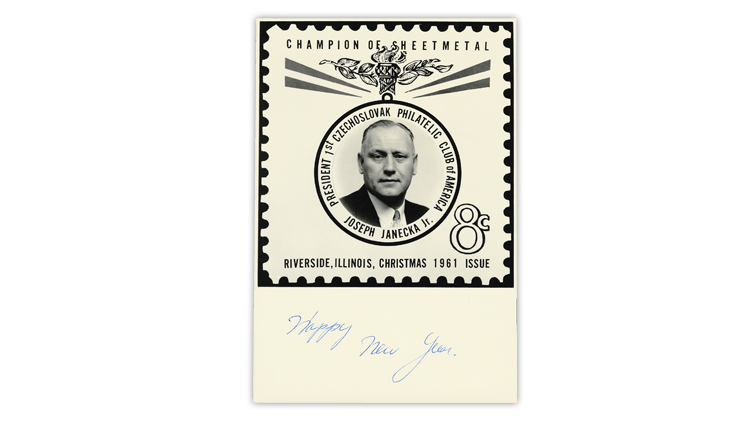 The Champions of Liberty stamp series began in 1957 and lasted until 1961. This 1961 takeoff on the standard design was used as a holiday greeting card by the gentleman pictured. His story is in the accompanying column.

Sometimes a stamp design begs to be used for purposes the United States Postal Service or its predecessor, the U.S. Post Office Department, never contemplated.

Among the most unusual holiday cards I have run across is one from Joseph Janecka Jr. pictured here. Janecka used the 1957-61 Champions of Liberty stamp series as the basis for this 1961 Christmas greeting. He was, according to the lettering around the medal, president of the Czechoslovak Philatelic Club of America.

I previously pictured this card in the U.S. Stamp Notes column in the Jan. 7, 2019, issue of Linn’s, and, at that time, I asked if anyone had more information about Janecka.

Ludvik Svoboda, an active member of the Society of Czechoslovak Philatelists and editor of its Czechoslovak Specialist for 21 years, responded.

He provided a copy of the Winter 2019 issue of Czechoslovak Specialist, in which Keith Hart (the journal’s current editor) used information from Svoboda to follow up on my column. The article said:

“He followed his father to become an expert in sheet metal work. It was these skills that he used to fabricate a very large sheet metal replica of the 8-cent T.G. Masaryk ‘Champion of Liberty’ stamp. The replica was very prominently displayed at the first day of issue ceremony in Washington, D.C. It is now in the archives of the Smithsonian Institute (sic.). He also used these skills to make special awards for Czech and Slovak stamp exhibits. …

“Finally, he was an active proponent of the specialized philatelic collecting area of Bohemoslovenika. This involves the collecting of stamps from foreign countries that display some form of connection with Czechoslovakia. This might include CzSl personalities, artists, artwork, writers, leaders, historical figures, architects, churches, village scenes, costumes, etc. …”

My thanks to Svoboda and Hart for updating the story. If you want more information about the society, visit its website.

I would also be remiss if I did not throw a bouquet of Christmas flowers to them and to the hundreds of other specialty society activists who labor in the vineyards to make those groups — some 200 of them in the United States — into rich resources for their members.

I would especially like to single out the editors of specialty society periodicals who produce the single largest benefit of society membership.

If you have a deep interest in some aspect of philately and are not a member of the specialty society that covers your interest, you are missing a rewarding experience. Try Googling your interest with the words “philatelic club” or visit the American Philatelic Society’s online listing of APS affiliates to find a society for you.