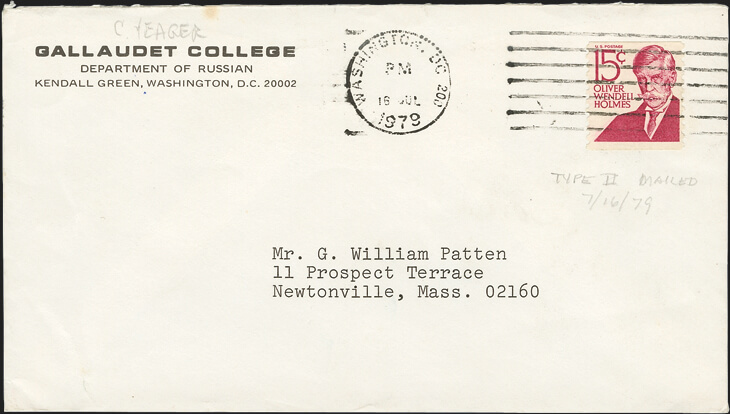 The Oliver Wendell Holmes 15¢ stamp has five different versions, partially caused by three die types. The one on this July 16, 1979, cover is Type II of the coil issues. The cancel date is the earliest documented use for this stamp.

As the basic and most complete reference for United States philately, the Scott Specialized Catalogue of United States Stamps and Covers is an unparalleled resource, but on occasion, it fails. Fortunately, it also rectifies these situations.

One such instance relates to the 15¢ Type II Oliver Wendell Holmes coil stamp that was sprung on an unsuspecting public in 1979.

Type II of the sheet stamp (Scott 1288d) was released without notice to the public, and Scott notes that its earliest documented use (EDU) date is July 16, 1979.

What are the differences in the die types? The Scott U.S. Specialized describes them as follows:

“Type I: Necktie barely touches coat at bottom; crosshatching of tie strong and complete. Flag of ‘5’ is true horizontal. Crosshatching of “15” is colorless when visible.

“Type II: Necktie does not touch coat at bottom; LL [lower left] to UR [upper right] crosshatching lines strong, UL to LR lines very faint. Flag of ‘5’ slants down slightly at right. Crosshatching of ‘15’ is colored and visible when magnified.

Until the recently published 2017 Scott U.S. Specialized catalog, there was no EDU date listed for the Type II. Was it issued on the same date as the Type I coil? Or was it released at about the same time as the Type II sheet stamp?

Those questions were finally answered by the cover shown nearby. Reported by retired stamp auctioneer Jacques C. Schiff  Jr., this cover was sent by U.S. stamp scholar Charles Yeager to another U.S. collector, G. William Patten. The cancellation date is July 16, 1979, the same as the EDU for the Type II sheet stamp, and the cover bears a penciled notation “Type II mailed 7/16/79.”

I submitted this cover to Scott in hopes that the editors would add this as the EDU date for the Type II coil, and they did. The catalog note reads, “Earliest document use: July 16, 1979 (No. 1305Ei).”