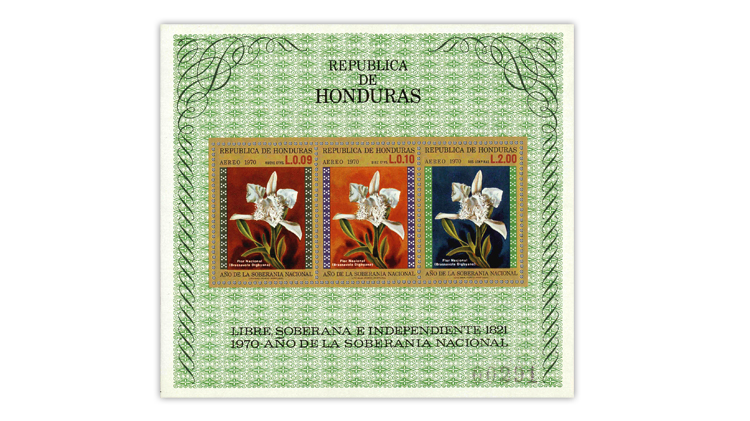 There is strong demand for the four 1972 Honduras airmail stamp souvenir sheets (Scott C516a-C519a) issued to commemorate the 150th anniversary of Honduran independence.

Honduras is located in Central America, east of Guatemala, northeast of San Salvador and north of Nicaragua. It has a long coastline on the Gulf of Mexico and a short coastline on the Pacific Ocean.

Honduras was claimed by Spain in 1502 and was a Spanish colony until it gained independence in 1821. Briefly included in the Empire of Mexico and the United Provinces of Central America, it became a fully independent republic in 1838.

Honduras is popular with many collectors of Latin America, with steady demand for stamps of most periods.

On May 19, 1972, Honduras issued a set of 15 airmail stamps and one airmail special delivery stamp (Scott C505-C519 and CE4). Stamps in the set bear the year date “1970,” but they were not issued until 1972. The stamps commemorate the sesquicentennial of Honduran independence.

There is strong demand for these souvenir sheets in mint never-hinged condition, and they are a good buy at full Scott catalog value.