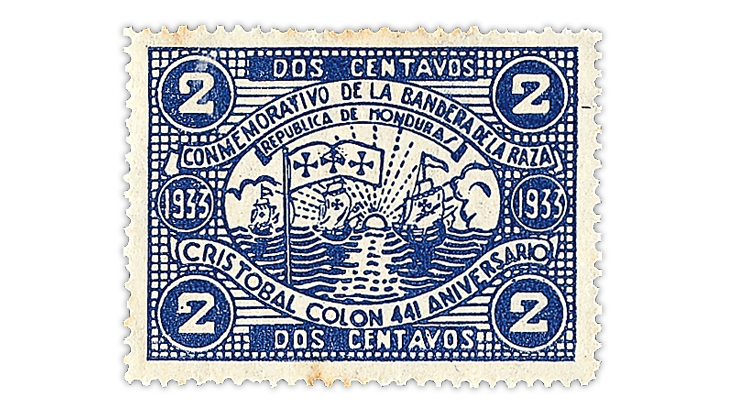 Expect to pay $20 or more for the Honduras 1933 Columbus’ Fleet and Flag of the Race set of six stamps (Scott 322-327) in unused, hinged condition and very fine grade.

The market for stamps from most Latin American countries remains vibrant. Latin America includes countries in the Western Hemisphere where Romance languages such as Spanish, Portuguese and French are spoken. This includes Central America, most of South America and some of the Caribbean countries.

Dealer prices for the stamps of these nations often vary widely, usually dependent on how closely the dealers are connected to the country or countries of the stamps they are selling.

Honduras is a predominantly Spanish-speaking country in Central America bordering Guatemala, El Salvador and Nicaragua. It has coastlines on both the Caribbean Sea and the Gulf of Fonseca in the Pacific Ocean.

Honduras gained its independence from Spain and was briefly part of the Empire of Mexico and the United Provinces of Central America before becoming fully independent in 1838. Honduras issued its first stamps in 1865.

On Aug. 3, 1933, Honduras issued a set of six Columbus’ Fleet and Flag of the Race stamps (Scott 322-327) to honor Dia de la Raza (Day of the Race). This day is designated as a national holiday on Oct. 12 by Argentina, Chile, Costa Rica, the Dominican Republic, Ecuador, Honduras, Mexico, Uruguay and Venezuela. It is also celebrated locally in other Spanish-speaking Latin American countries.

The day acknowledges the fusion of European, Indian and African races and cultures, which began with the arrival of Christopher Columbus, to create the Ibero-American race and culture of Latin America. The holiday was first celebrated in Argentina in 1917.

October 12, the anniversary of Columbus’ first landfall in the Western Hemisphere, was observed in the United States as Columbus Day. In 1971, the holiday was moved to the second Monday of October.

This set of Honduras stamps is also popular with Columbus topical collectors.

The Scott Classic Specialized Catalogue of Stamps and Covers 1840-1940 values the set of six stamps in unused, hinged condition at $16.40.

You might have to search for a while to find this set. When you do find it, expect to pay $20 or more for a set in unused, hinged condition and very fine grade.

An affordable start to a beer stamp collection