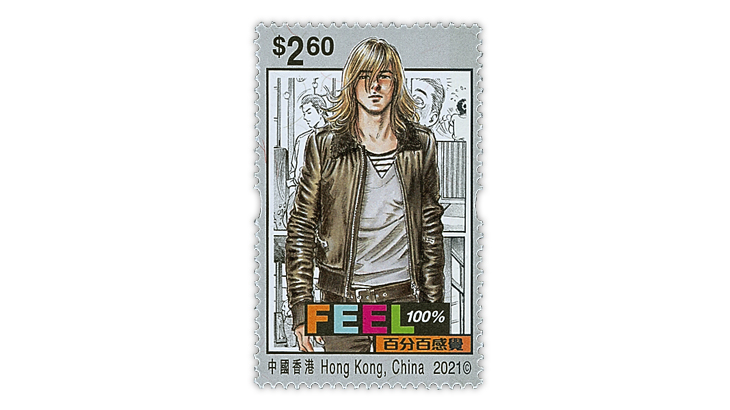 The main characters from the Hong Kong comic Feel 100% appear in bold colors against the background of comic panels from the actual series on these six stamps issued Sept. 16 by Hong Kong Post.

The original series ran from 1992 to 2007. In 2008, the comic won the gold award at the second International Manga Award organized by Japan’s Ministry of Foreign Affairs.

Feel 100% was also adapted into movies and a television series, and now, over a decade later, the comic holds a nostalgia factor for people who were young at the time.

In viewing these new stamps, it’s clear to see that nothing was lost in the transition from comic panel to the smaller space given in the stamps.

Upon a closer look, it’s clear to see that the images in the backgrounds are reproductions of pages from the comic.

Each of the two souvenir sheets contains a single stamp ($10 and $20). The press release explains that the backgrounds of these sheets capture the moments when the male and female protagonists of the story meet.

Andrew Lo designed the stamps and souvenir sheets, using the comic book illustrations by Lau Wan-kit. Joh. Enschede of the Netherlands printed them by lithography. The $20 souvenir sheet also has what Hong Kong Post describes as “sand varnish and spot varnish.”

The stamps were issued in separate panes of 25 and small panes of four.

It’s never easy to revamp a children’s series for the grown audience, no matter the medium. It’s even more difficult to cross media while doing this. These stamps do so in such a way to please even the most particular fans. Those who may not be familiar with the series may still have an interest in these stamps as an example of exceptional quality and attention to detail.