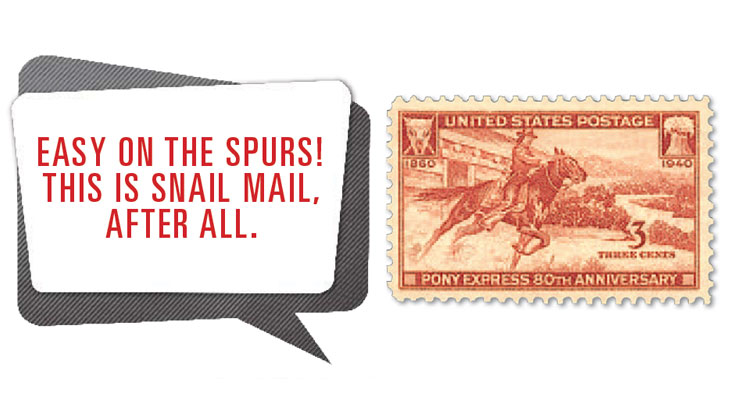 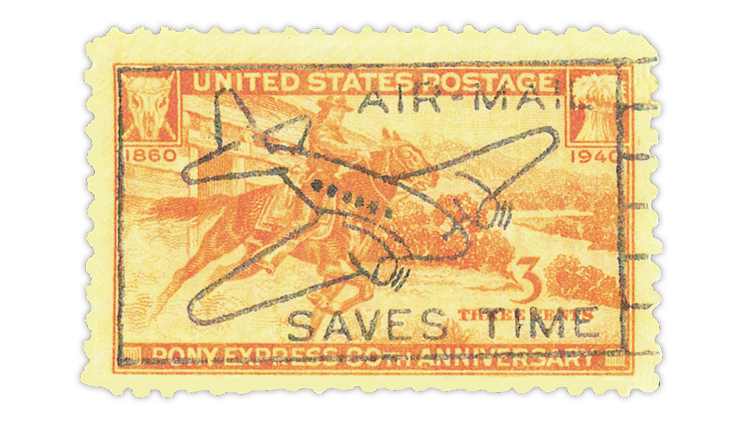 The images on the stamp and the cancellation illustrate fast mail transportation of two different eras.
Previous
Next

In the contest entries, one of the most-used themes was the 3¢ face value of the stamp, which isn’t as immediately obvious as it is in most U.S. stamp designs.

An entry from Don Morris of Lapeer, Mich., represents this group: “Is it 3 cents, horse sense, or horse scents that gets the job done?”

Another concept that appealed to several entrants was the lack of today’s convenient comfort facilities in the days of the Pony Express.

In this year before a presidential election, it is not a surprise that politics was on the minds of many who entered the contest. Some entries were off the chart and unpublishable, and the senders sometimes acknowledged that. But Steve Kotler of San Francisco, Calif., managed to stay nonpartisan with “In the next race, I’m ahead in the Gallop Poll.”

If a picture is worth a thousand words, Jim Sorenson of Madison, Wis., scored with the stamp image that is shown above, providing a nice summary on the difference between today and the era of the Pony Express.

For this contest, I tried something a bit different. Instead of asking for philatelic and nonphilatelic captions, I asked for lines from the horse and from the rider.

The winner for the rider part of the contest comes from Earl Schaffer of Severna Park, Md., who brings the stamp design into the modern era with “PMG Brennan, I know we can’t afford the new trucks, but really. … !”

The other winner is David Curtis of Arlington, Va., who offers the horse’s request shown above.

“Next stop, Churchill Downs!” from Danny Terreault of Quebec, Canada.

“Better change your speed from 50 to 60 or those Indians are going to catch us,” from Rudy Chiesa of Fresno, Calif.

“Gets me out of doing the chores!” sent by John Berrera of Concord, N.C.

“After galloping since 1940, I really need a drink,” sent by Charles Wales of Ashburn, Va.

“I wanted to audition for the speaking part of Mr. Ed, but at the time I was just a little hoarse,” by Steve Kotler of San Francisco.

“I could be faster without him on me!” from Rich Wolk of Westminster, Md.

Thanks and a tip of the hat to all who entered. The next contest will be announced in the Oct. 14 issue of Linn’s.