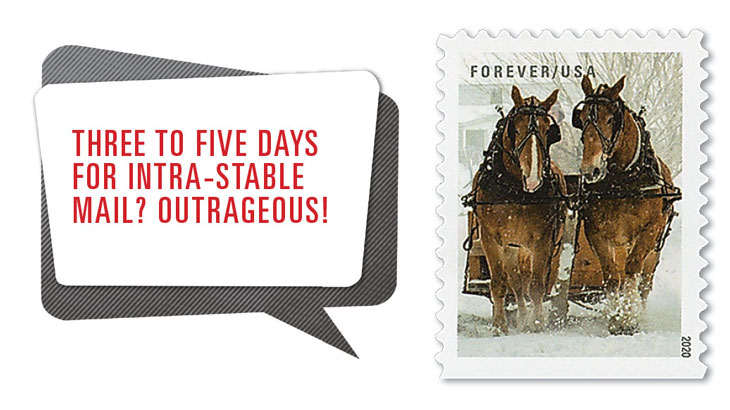 The winner of the philatelic part of the March cartoon caption featuring the Two Horses forever stamp from the 2020 Winter Scenes set of 10 is Ethan Faure of Cambridge, Mass., who recalled the abysmal mail delivery service this past December and January.

The pair of horses on one of the Winter Scenes stamps issued Oct. 16, 2020, for use at Christmastime (Scott 5541) served as the focus for the March cartoon caption contest.

This contest was popular with Linn’s readers, drawing nearly 100 entries.

Many of these were related to the changes made by Postmaster General Louis DeJoy late last year to deal with what he saw as inefficiencies in operations.

The Postal Service’s performance during December and January was so spectacularly bad that there was much scurrying about to find people and institutions to blame, and the new postmaster general got the worst of it. Linn’s readers clearly adopted this line of thinking.

Gary Hall of Lyons, Ill., represents this group with one horse saying to the other, “I hear that the PMG wants to slow down mail deliveries; why don’t we pitch in and help him achieve his goal?”

The horses on the stamp resemble the Budweiser Clydesdales so closely that several entries commented on that theme and Super Bowl ads. Thomas Ream of Spring Grove, Penn., submitted, “And we don’t even get to drink the beer!!”

The horses’ blinders inspired several entries. Henrik Rossell of Poolesville, Md., suggested, “We have blinders on so we can’t see the coming rate hike.”

Steve Kotler of San Francisco, Calf., took a different approach with “I must have had blinders on when I agreed that we should get hitched!”

For the philatelic part of the contest, the winning entry was from Ethan Faure of Cambridge, Mass.

Kenny Moore of Rocklin, Calif., won the nonphilatelic part of the contest with “Don’t be such a neigh sleigher.”

“Your stall or mine?” by Larry La Dassor of Stewartville, Minn.

“I love the new stable! Wild humans couldn’t drag me away!” by Nicholas D’Amico of Kingman, Ariz.

“We should nag Congress to get the USPS back on track!” from Gilbert Schaye of New York, N.Y.

“Do you hate ‘Jingle Bells’ as much as I do?” sent by Jack Leonard of Hatboro, Pa.

“Wait. Did they say social distancing is six feet or six inches?” by Joe Kowalski of Waupun, Wis.

“Why don’t we ditch this job and start our own business? We could call it Pony Express,” from Mike Shefler of Gibsonia, Penn.

“I just had a horrible thought: What if the glue on the back of our stamp is someone we know?” by Steve Kotler.

Thanks and a tip of the hat to all who entered. The next contest will be announced in the May 10 issue of Linn’s.