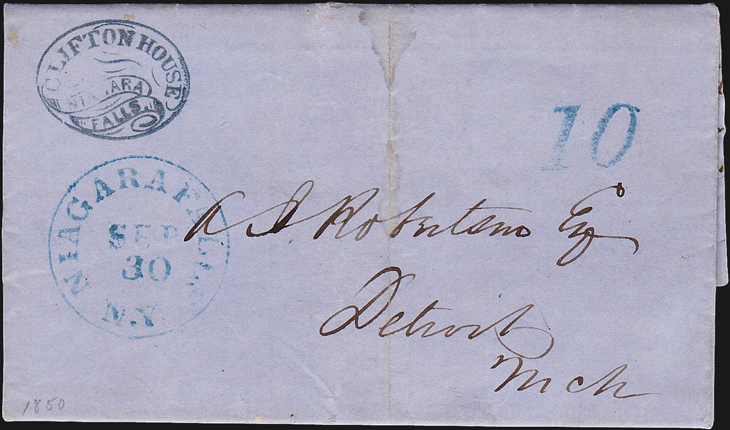 The Clifton House in Niagara Falls, Ontario, Canada, attained historical importance during the Civil War as a neutral place where combatants could talk. The hotel’s ornate forwarding handstamp appears at top left on this 1850 cover carried across the border to the post office in Niagara Falls, N.Y. 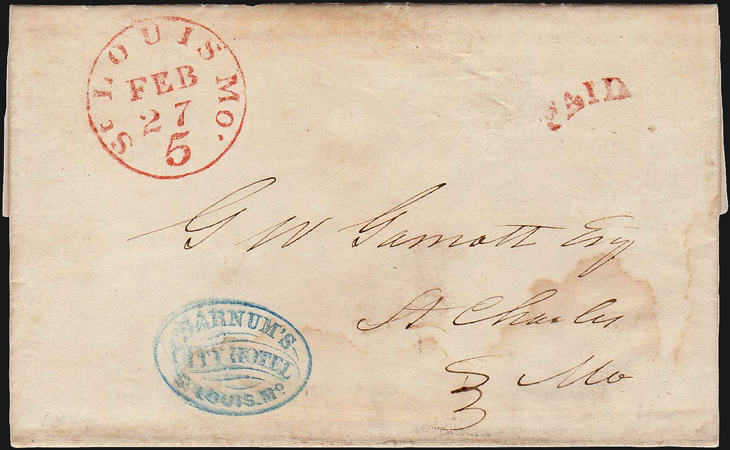 Barnum’s City Hotel, located in St. Louis, also helped with mail forwarding, as can be seen by the blue oval handstamp on this 1849 cover sent to St. Charles, Mo. 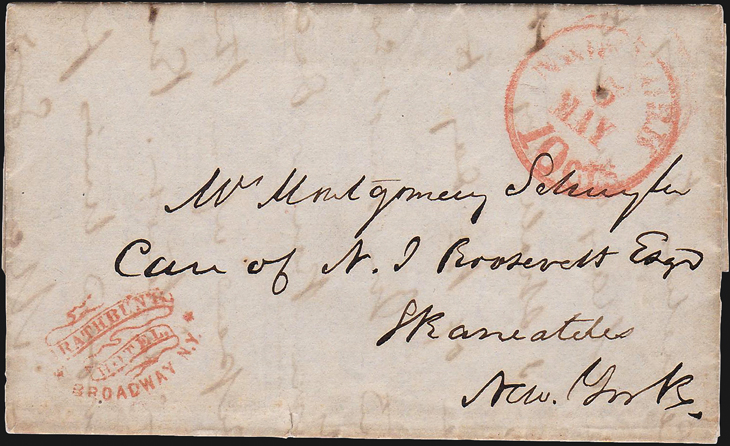 During the middle of the 19th century, a number of hotels, as a convenience to their guests, would forward mail to the post office. This cover, from 1848, bears the decorative handstamp (at lower left) of the Rathbun Hotel in New York City.
Previous
Next

In the 1840s and 1850s, people used many different ways to get mail to the post office.

Friends, for example, would take it for you; WAY mail, which was discussed in my June 1, 2016, column, would get mail there for a fee; local, carrier, and express services would convey mail to the postal service, also for a fee; government carrier service was available for a fee; or one could take their own mail to the post office for service.

Another convenient avenue for getting the mail to the post office was available to those who were patrons of some of the hotels of the era.

Many hotels would take mail to the post office as an additional benefit for their guests. Records do not show if there was a charge for this service.

But there is a school of thought that they might have, in some cases, charged a fee because they were in competition with the local and carrier companies of the era by providing messenger service to and from the post office.

These hotels often used handstamps to indicate this service. There are more than 70 hotel handstamps listed in the literature.

The hotels were located all over the United States, with the exception of one in Canada that carried the mail across the border to be put in the United States post office in Niagara Falls, N.Y. Most of the handstamps were on the back of the covers. Here, I have selected three displaying the markings on the front.

New York City had the most hotels, 19, that provided this service. One of them was the Rathbun Hotel at 163 Broadway, which was a popular public house in the 1840s.

The Rathbun family had other hotels in New York, with one in Elmira and one in Buffalo.

Shown nearby is an 1848 cover carried from the Rathbun Hotel to the New York City post office and sent to Skaneateles, N.Y. At lower left is the hotel’s ornate oval ribbon marking.

Theron Barnum worked for his brother David at City Hotel in Baltimore in the 1830s. In 1840, he arrived in St. Louis and rented a property on Third and Vine, which he called Barnum’s City Hotel.

The hotel was well thought of and was a meeting place for public figures and military personnel who were going to and from the Western forts. Barnum managed the hotel for 13 years and left in 1852. In 1854, he opened a new Barnum’s City Hotel, which, at six stories, was the first skyscraper in St. Louis.

Illustrated nearby is an 1849 cover carried from Barnum’s first City Hotel to the St. Louis post office and sent to St. Charles, Mo. The hotel marking, to the left of the address, is a blue oval.

The Clifton House in Niagara Falls, Ontario, Canada, opened in 1835 and burned down in 1898. Three stories tall, with 60 rooms, it was a popular meeting place for townsmen and travelers. The Clifton attained historical importance during the Civil War as a neutral place where combatants could talk.

As a hotel forwarder, it was different than the other two discussed here because it carried mail across the border to Niagara Falls, N.Y., where mail was placed in the post office. In this way, the additional payment for cross-border mail was avoided.

The cover pictured here was written in 1850 and given to the hotel, which took it from Canada to the United States where it was canceled with a Niagara Falls circular datestamp and sent to Detroit. The hotel marking, just above the Niagara Falls postmark, is a black oval.

Collections have been made of the towns, such as New York and Philadelphia, which had multiple hotels providing this service. Some collectors have tried to acquire every marking from every hotel.

I find the markings insightful because they demonstrate how individuals creatively found a way to make the postal system work more efficiently by providing a needed service.