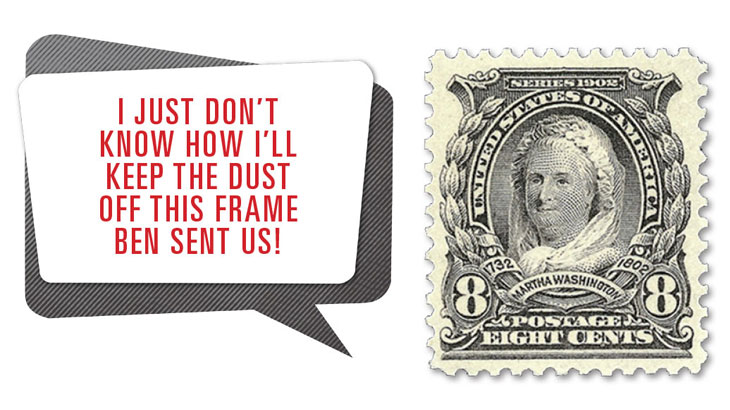 The winner of the philatelic part of the October cartoon caption contest featuring the United States 1902 8¢ Martha Washington definitive stamp is John Walbridge of Bloomington, Ind.

President Washington was one of two Founding Fathers honored on our first national stamps issued in 1847. The other was Benjamin Franklin.

Washington’s wife waited 55 years for her first philatelic appearance. After that she was included in the 1922 series and the 1938 Presidential series. Then she fell off the philatelic radar screen.

So it may not be a surprise that the possibility of a reappearance should occur to several contest entrants.

David Vikan of Dickinson, N.D., took the direct approach with, “My 300th birthday is coming up. I’ll be on my own stamp again, by George!”

In fact, Martha’s birthday isn’t exactly just around the corner, as 2031 is the year that marks her 300th birthday. I would certainly support a stamp.

A second major theme was combined with the birthday idea, as noted in this line by Bill Thacker of Sidney, Ohio, “I’d give my husband’s wooden teeth to get on a Forever stamp.”

Mike Crooks of Jacksonville, Fla., sent another denture-related line, “I’d smile too if I had George’s wooden teeth!”

The intricate frame design on the 8¢ Martha Washington stamp is the subject of the philatelic line winner from John Walbridge of Bloomington, Ind. His entry is shown here.

On the nonphilatelic side, the winner is Vincent Nesci of St. Petersburg, Fla., whose entry is “George! I declare — You’ve been seeing a lot of that Betsy Ross woman lately!”

“Last time I saw George was when he sent me a letter with a stamp showing him at Valley Forge,” from Laura and Tom Tomaszek of Cedar Rapids, Iowa.

“George, I know you’ve never told a lie. Does this bonnet make me look old?” by Dave Schwartz of Commack, N.Y.

“Did George cut down the cherry tree because it was time to replace his dentures?” sent by Edgar Dunlap of Gainesville, Ga.

“Just so you know, both Batman’s and Superman’s mothers were named after me!” by Josh Tanski of Varysburg, N.Y.

“I spend my summers on Martha’s Vineyard, where else?” sent by Steve Kotler of San Francisco, Calif.

“Father of this country — maybe. But he was hardly ever home to help with the kids!” by Sid Morginstin of Trenton, N.J.

“Someday … a woman will be President, by George!” from John Burns of Stevensville, Mich.

Thanks and a tip of the hat to all who entered. The next contest will be announced in the Dec. 12 issue of Linn’s.

Love is in the air for November cartoon caption contest