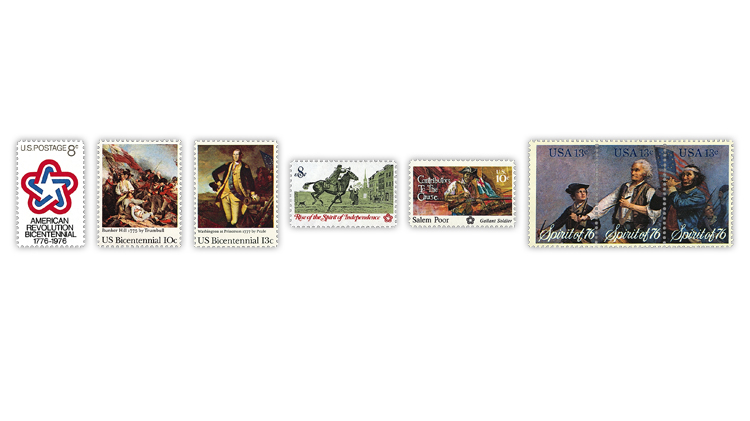 Numerous United States stamps were issued to celebrate the 1976 Bicentennial, beginning with an 8¢ stamp in 1971 showing the Bicentennial Commission emblem. Also shown here are stamps commemorating battles, Colonial communications and contributors to the

The 200th birthday of the United States in 1976 was the occasion for much philatelic celebrating on stamps, starting with the July 4, 1971, stamp showing the Bicentennial Commission emblem (Scott 1432).

This stamp and some of the later Bicentennial issues are illustrated above.

Among the numerous other subjects commemorated on Bicentennial issues were the Declaration of Independence, the First Continental Congress, and the bicentenaries of the American military services.

Given the facts that we are now in mid-2020 and that the Citizens’ Stamp Advisory Committee works two to three years ahead, I’m thinking that it will soon start to answer the question of how the nation’s 250th anniversary will be celebrated on stamps.

I would like to challenge Linn’s readers to think about this question and to let me know what you would like to see done to commemorate the 250th anniversary (the sestercentennial)? If you will send me a note with your ideas, I will include some of them in a follow-up column and provide your letters to CSAC for its consideration.