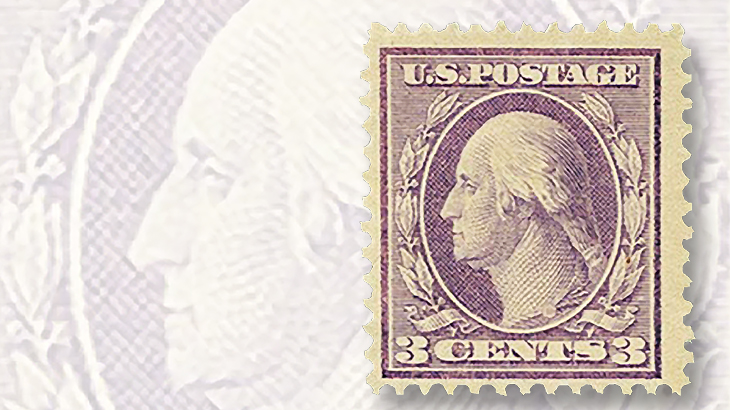 H.R. Harmer offered “the finest example” so far of a variety of the 3¢ Washington-Franklin flat-plate, single-line-watermarked, perf 12 stamp at auction in mid-October. It sold for $4,130. 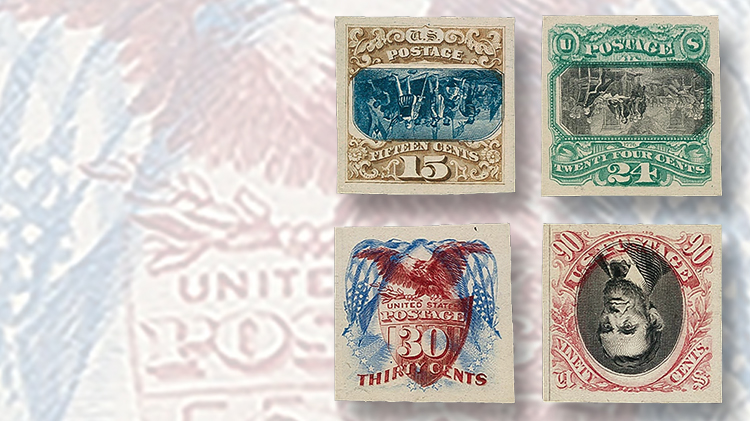 A set of plate proofs on card of the four bicolor designs from the 1869 Pictorial set, with centers inverted, sold for $11,800 at the H.R. Harmer sale in Los Angeles in mid-October. 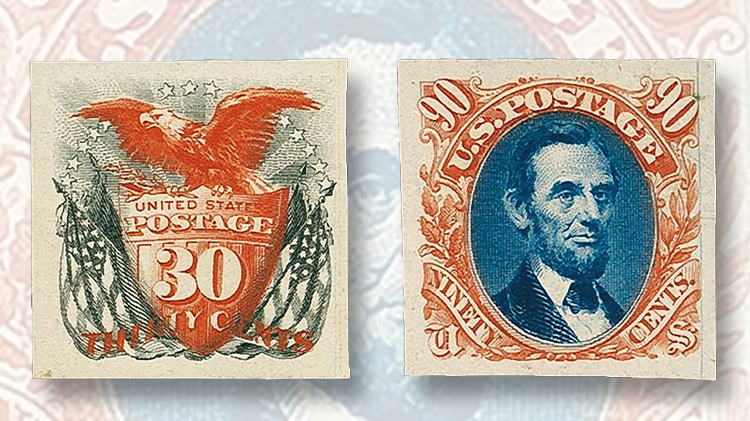 A nearly complete set of the so-called Atlanta trial color proofs of the 1869 issue, sold for $15,340 at the H.R. Harmer sale in October. Only 100 sets were issued.
Previous
Next

The firm of H.R. Harmer held a big three-day sale Oct. 13-15 at its offices near Los Angeles. Once again, an interesting Washington-Franklin variety popped up alongside the classics.

The classics included a number of lots of 19th-century die and plate proofs. In those days, the private banknote companies would make proofs to be used as a sales and marketing tool, so these survive in reasonably large numbers to be collected as collateral items alongside the issued stamps. Scarcer are the proofs of turn-of-the-century issues made for presentation purposes by the government, although these, too, number in the dozens. (Not until mid-20th-century issues do die proofs become rare.)

Among the proofs in the H.R. Harmer sale was a set of plate proofs on card of the four bicolor designs from the 1869 Pictorial set, with centers inverted (Scott 129P4a, 120P4a-122P4a). These mimic the three actual inverted-color errors from the issued set, along with an unissued 90¢ Lincoln invert. The set sold for $11,800, including the 18 percent buyer’s premium added by H.R. Harmer to all lots.

For the 1881 International Cotton Exhibition in Atlanta, proofs of all previously issued U.S. stamps were prepared in five colors: black, scarlet, brown, green and blue. The exceptions were the bicolor 1869 values, which were printed in a dozen or more combinations.

A set of the so-called Atlanta trial color proofs of the 1869 issue, including all but the scarce green-and-black version of the 90¢ Lincoln, sold for $15,340. Just 100 sets were issued.

An enigmatic example of the 3¢ deep violet Washington-Franklin was offered as a variety of the flat-plate, single-line-watermarked, perf 12 stamp listed as Scott 376.

Apparently printed on horizontally laid paper, this unused stamp is one of just four reported of this type. Though not listed in the Scott U.S. Specialized catalog, the unused stamp did receive a certificate from the Philatelic Foundation in 2006, and is described as being the finest example discovered so far. It sold for $4,130.