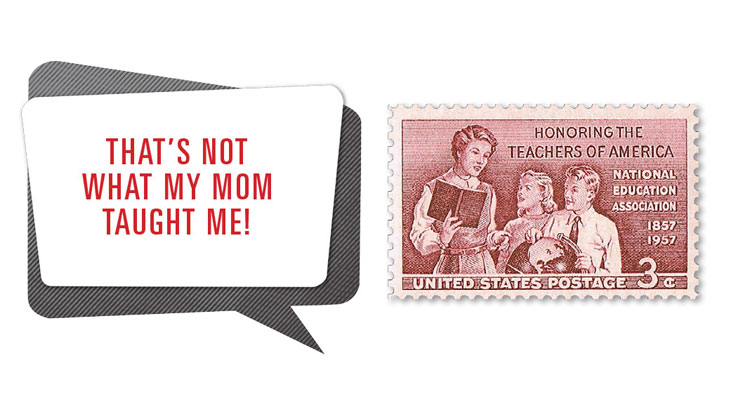 The winner of the best student line in the May cartoon caption contest is Cecil Reams of Cass Lake, Minn., who used the 1957 3¢ stamp honoring the teachers of America to reflect on the possible disconnect between home-schooling during the current pandemic

Reflecting on the times we live in, several entries in the cartoon caption contest for May drew TV or computer monitor screens around the teacher depicted on the 1957 3¢ stamp honoring the teachers of America (Scott 1093).

Stewart Lyons of Woodmere, N.Y., even suggested that the stamp be reissued as se-tenant pairs, with one stamp labeled “1957” when the stamp was first issued, and the other with the teacher on-screen labeled “2020.”

The most-used theme referenced the teacher holding a book. In this example from Laura and Tom Tomaszek of Cedar Rapids, Iowa, one of the children asks: “You read that, and it’s called a book?? And it can’t take pictures or send a text??!!”

Mark Saltzman of Fort Collins, Colo., represents a group of entries commenting on the circular globe and what shape some thought it should be. In his entry, the teacher asks, “What shape is the Earth?” and a student answers, “Crooked! Even my Dad says so!”

Some of the entries had a civil rights theme. For example, the entry from Michael Wright of Duanesburg, N.Y., dealt with desegregation and the Supreme Court’s 1954 ruling in Brown v. Board of Education of Topeka, Kansas. In this entry, the teacher says: “Linda Brown starts school tomorrow. She will be in our class. Let’s make her feel welcome!”

This caption contest differed from previous contests in that prizes were given for the best teacher line and the best student line, rather than for the best philatelic and nonphilatelic lines.

Many more teacher lines were received, perhaps reflecting the fact that most Linn’s readers are adults. The winner of the teacher line comes from Loring Lawrence of Manchester, N.H., “You’re right class; from the North Pole the Earth does look upside down!”

The winner for the student line comments on the at-home instruction many students are receiving from parents. It is from Cecil Reams of Cass Lake, Minn.

Here are the best of the other runners-up, starting with four lines from the teacher:

“The reason my C3a page is blank is that the School Board didn’t give us a raise!” from Peter Tuteur of St. Louis, Mo.

“Jimmy, did you wash your hands before you touched the globe? Now wash them again,” from Mildred Barylksi of Warrenton, Va.

“No, Johnny, when I asked you to point out the Amazon, I meant the river in South America, not the company in Seattle,” from Steve Kotler of San Francisco, Calif.

“Let me read you a horror story about politics in just 50 years,” from Michael Tremel of Leland, N.C.

Here are two lines from the student’s point of view:

“I’m teaching my parents the new Math!” by Arthur Richardson of Swampscott, Mass.

“Can Covid19 be spread by e-mail attachments?” by Kenny Moore of Rocklin, Calif.

Thanks and a tip of the hat to all who entered. The next contest will be announced in the July 13 issue of Linn’s.