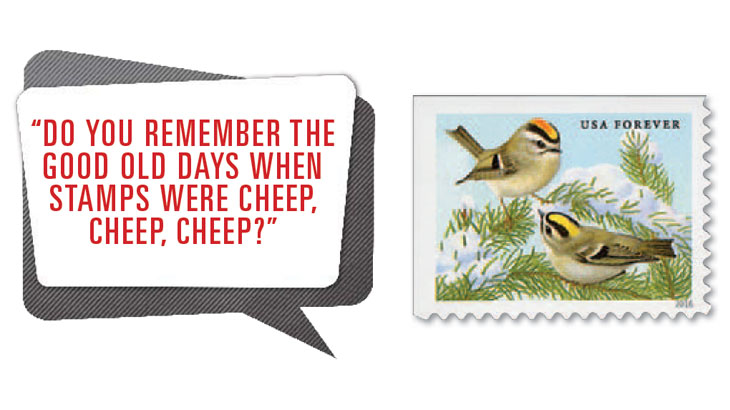 The unusual colors of the birds’ heads on the 2016 Songbirds in Snow forever stamp showing golden-crowned kinglets (Scott 5126) drew a great deal of interest as Linn’s readers considered their entries in the May cartoon caption contest.

Nancy Stearns of Santa Ynez, Calif., represents this group of entries with “Is it true that redheads have more fun?”

The second most popular theme was the intersection of bird “talk” with social media. For example, Doug Phillips of Sierra Vista, Ariz., sent in this entry: “I’m tweeting that I’m all a-twitter about bird topical.”

I expected more entries with a baseball theme, but there was only one: “Do you think the Orioles will win the World Series this year? No, I think it’ll be the Cardinals!” This entry from Michael Generali of Round Rock, Texas, was the nonphilatelic winner for May.

On the philatelic side, the winning entry was from Gordon Trotter of Sarasota, Fla.

“The royalties from this photo will keep us in bird seed for the whole winter!” by Peter Tuteur of St. Louis, Mo.

“Don’t look at the camera. He’s trying to pose us for a stamp,” from Rich Wolf of Westminster, Md.

“There has to be an easier way to perforate stamps than using our beaks,” by James Smith of Pisgah Forest, N.C.

“Let’s fly to Washington. I hear they have a lot of birdbrains there!” sent by Steve Kotler of San Francisco, Calif.

“Let’s see what new plans the USPS is hatching now to raise revenue!” from David Schwartz of Commack, N.Y.

The next contest will be announced in the July 8 issue of Linn’s.