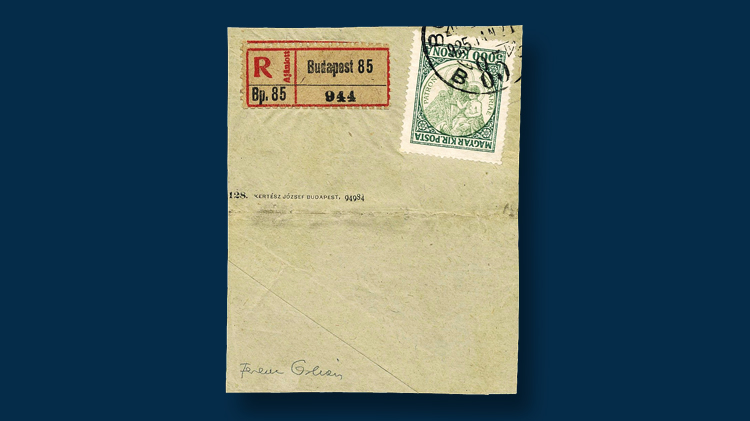 This registered mail envelope piece is franked with the rare 1923 5,000-korona dark green and yellow green Madonna and Child invert error stamp from Hungary. The piece will be offered during the March 2-3 public auction at Auction Galleries Hamburg.

The item is Hungary’s 1923 5,000-korona dark green and yellow green Madonna and Child stamp with inverted center (Scott 386a).

The stamp is postally used on an envelope piece that includes a perforated Budapest registration label.

Only one sheet of 100 invert stamps is known to have been sold, but the subtle invert was not immediately noticed, and some examples from that single sheet have been lost. A few unused invert stamps exist, and it has been reported that 38 stamps are in museums, substantially diminishing the quantity available to collectors.

Auction Galleries Hamburg describes this available example as having perfect centering and perforations.

The 2018 Scott Classic Specialized Catalogue of Stamps and Covers values the postally used error stamp at $16,000, listed in italics to indicate an item that can be a challenge to value accurately.

The invert error item is offered in the auction with a starting bid of €5,000 (approximately $6,210 in early February).

Another significant rarity on offer is an unused stamp from Ceylon, the 1863-67 2-penny yellow green with the taller of the two Crown and CC watermarks (Scott watermark 1a), perforated gauge 12½ (Scott 48A).

Auction Galleries Hamburg describes this stamp as one of the rarest unused stamps of Ceylon with only four known, and points out that one of those four resides in the royal collection of Queen Elizabeth II, leaving just three in private hands.

The stamp is authenticated with a 1991 certificate from the Royal Philatelic Society and listed with a €10,000 starting bid (roughly $12,420).

Though the Scott value is $10,000 in italics, Auction Galleries Hamburg cites the €12,000 value assigned in the Michel specialized catalog and describes that value as “very underpriced.”

The Friday and Saturday sale will offer some 6,583 lots of worldwide material including individual stamps, postal history and collections.

A selection of United States classic stamps, covers, postal stationery and more is also being offered.

Several stampless covers are among these lots, including an early trans-Atlantic letter mailed in 1816 from New York to St. Jean de Luz in southwestern France. The letter, written entirely in French, is struck with a red COLONIES/PAR LE HAVRE double-line entry postmark and offered with an opening bid of €120 ($150).

The auction can be viewed online. An English-language link appears on the web page at upper right.