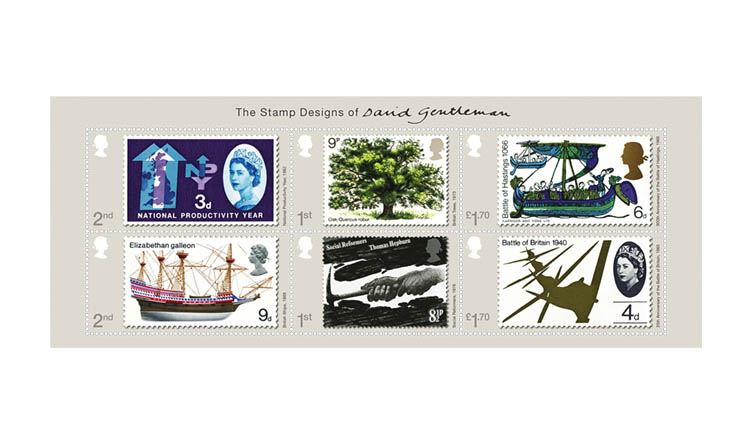 On Feb. 18, Great Britain’s Royal Mail issued a souvenir sheet depicting stamps designed by David Gentleman. He worked with Royal Mail in selecting the stamps to be featured on the sheet from among the more than 100 he designed in a career spanning nearly

Gentleman designed more than 100 stamps for Royal Mail in a career that spanned nearly 40 years, from 1962 to 1999. Each of the six stamps in the new souvenir sheet shows one of these stamps. The sheet is titled “The Stamp Designs of David Gentleman.”

In January 1965, Gentleman wrote to Postmaster General Tony Benn (1925-2014) in response to a general invitation for stamp ideas. His ideas brought about change for British stamp design.

Gentleman suggested having special themes for stamp issues rather than commemorating events like conferences and festivals.

He also changed how Royal Mail used se-tenant (side-by-side) designs. Rather than joining together multiple different designs, Gentleman introduced the idea of continuing one design over several stamps. A notable example of this kind of se-tenant design is the 1966 set marking the 900th anniversary of the Battle of Hastings (Scott 470-477).

Many elements of stamp design implemented by Gentleman became standard for Royal Mail. He proposed omitting the queen’s head on stamps due to design problems, and while this suggestion was not put into use, Royal Mail did adopt his later idea of using the cameo head of the queen based on a profile by Mary Gillick. This cameo now appears on Great Britain’s commemorative stamps.

Royal Mail last issued one of Gentleman’s designs on a Dec. 14, 1999, souvenir sheet featuring a stylized clock and globe (Scott 1889) as part of millennium celebrations.

The new Feb. 18 issue from Royal Mail celebrates Gentleman’s lasting legacy with an homage to six of his more notable designs.

Royal Mail collaborated with Gentleman in selecting the six stamps to appear on the stamp-on-stamp designs in the souvenir sheet. Each presents one of the stamps Gentleman designed on a subtle gray background.

The stamps depicted maintain their original designs down to the denominations and images of the queen. The gray background gives the present denomination or nondenominated inscription and a standard cameo of the queen, which is in use today because of Gentleman’s influence. Included on the right side of the background are the title and year of issue of the highlighted stamp.