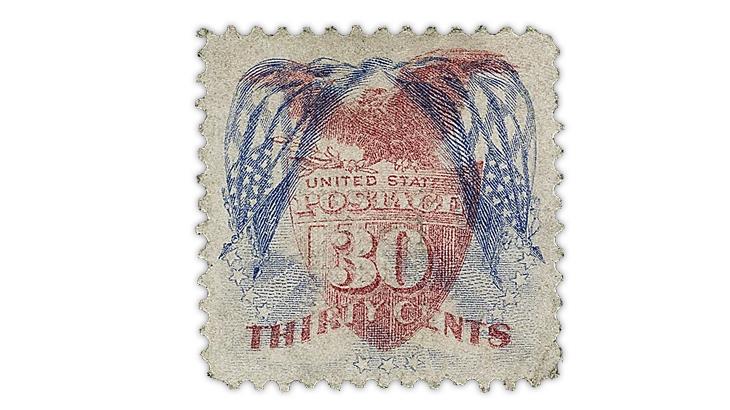 Among the many highlights in Robert A. Siegel Auction Galleries’ Nov. 9-10 sale of the Arthur S. Przybyl collection of United States, Confederate States and Hawaii stamps is this choice unused U.S. 1869 30¢ Shield, Eagle and Flags with the flags inverted. 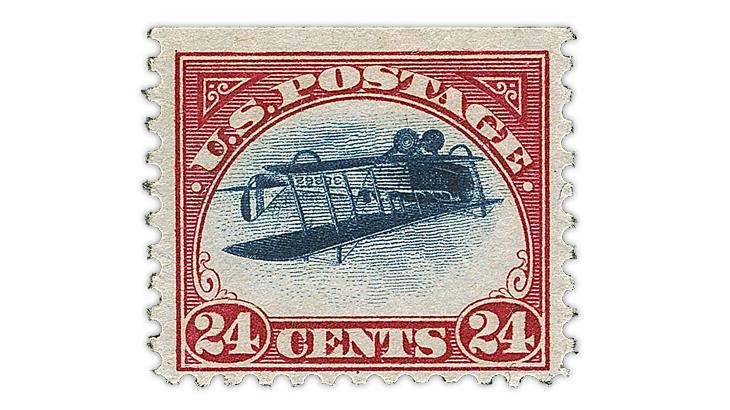 The 1918 Jenny Invert from position 3 in the discovery pane of 100 will cross the auction block during the Siegel sale of the Przybyl collection. The stamp comes from the top row of the pane and retains its natural straight edge at top. William T. Robey p 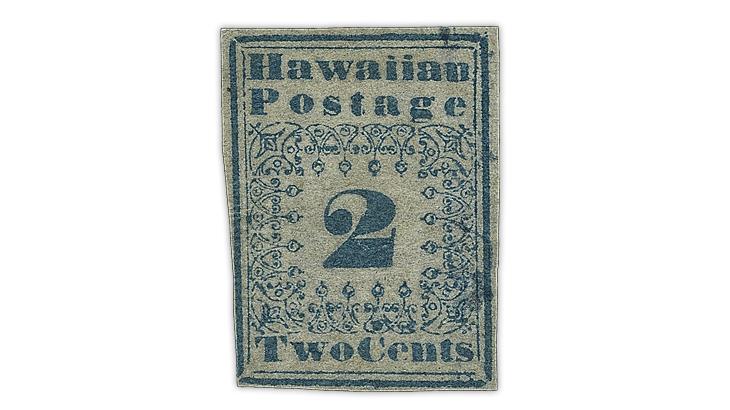 The Hawaii 1851 2¢ Missionary stamp in the Siegel auction of the Przybyl collection is the only known unused example of Hawaii’s first stamp. Przybyl acquired this iconic stamp during Siegel’s 2018 sale of U.S. stamp treasures from the William H. Gross co
Previous
Next

A 1918 Jenny Invert and the unique unused 1851 Hawaii 2¢ Missionary are among the iconic rarities and desirable stamps in top-notch condition up for bids during Robert A. Siegel Auction Galleries’ Nov. 9-10 sale of the Arthur S. Przybyl collection of United States, Confederate States and Hawaii.

“Over the years, many of the rarities in the collection were acquired from other famous stamp collections offered through Siegel Auction Galleries. One of the stamps, the unique unused 2¢ Hawaiian Missionary, was acquired at the auction of the William H. Gross United States Stamp Treasures in 2018. Mr. Przybyl considers the unused 2¢ Missionary to be one of the most valuable and iconic stamps in all of philately, and his most prized possession in his collection,” Trepel and Shreve said.

Trepel and Shreve noted that the European classics material in the Przybyl collection will be offered in a Siegel International sale later this fall.

The Nov. 9-10 sale opens with an impressive selection of postmasters’ provisionals and continues with all major U.S. issues of the classic era, from the 1847 issue through the 1881-87 issues of the American Bank Note Co.

Featured in the Przybyl collection are a number of well-known errors. Among these are four 1869 Pictorial inverts: a used 15¢ Landing of Columbus (type II, Scott 119b), a used 24¢ Declaration of Independence (120b), and unused and used examples of the 30¢ Shield, Eagle and Flags (121b).

The unused (no gum) 1869 30¢ Pictorial invert possesses “deep rich colors and detailed impressions” and “unusually choice centering with well-balanced margins,” according to Siegel.

Philatelic Foundation certificates issued in 1978 and 2002 state that the stamp is “slightly toned.” Siegel also notes that the stamp has a minor thin spot and “sensibly strengthened corner creases at bottom right.”

Only seven unused examples of the 1869 30¢ Pictorial invert are recorded. Of these, one has part of its original gum, and the other six have no gum. The example with original gum and two of the stamps without gum are sound, according to Siegel.

Siegel’s census of the unused 1869 30¢ Pictorial inverts is available online at www.siegelauctions.com/census/us/scott/121b.

Siegel estimates the 1869 30¢ invert in the Przybyl sale at $300,000, which is the value for an unused, no-gum example in the Scott Specialized Catalogue of United States Stamps and Covers.

Another spectacular invert will cross the Siegel auction block on Nov. 10, the second day of the sale.

The stamp is the famous 1918 24¢ carmine rose and blue airmail error stamp showing the blue Curtiss Jenny biplane upside down within the carmine rose frame.

Known to collectors far and wide as the Jenny Invert, the example in the Przybyl collection is from position 3 in the discovery pane of 100 purchased by William T. Robey on May 14, 1918, at the window of the New York Avenue post office in Washington, D.C.

The stamp has a natural straight edge at top, original gum and a “3” position number written on the back by Philadelphia stamp dealer Eugene Klein, who purchased the pane from Robey for $15,000.

Siegel lists the position 3 Jenny Invert at the Scott U.S. Specialized catalog value of $450,000, which is for a sound unused example in the grade of very fine.

A wealth of additional information about the Jenny Invert is available on Siegel’s Inverted Jenny website, www.
invertedjenny.com.

One of the crown jewels of the Przybyl collection is an unused Hawaii 1851 2¢ Missionary (Scott 1). It is the only known unused example of the first postage stamp from Hawaii.

Unlike most off-cover Hawaii Missionary stamps, the example in the Przybyl sale is completely sound and is considered to be the finest of the 15 recorded examples.

Przybyl added this great rarity to his collection after acquiring it for $619,500 during Siegel’s Oct. 3, 2018, sale of U.S. stamp treasures from the William H. Gross collection.

“The stamp was one of Mr. Gross’s personal favorites, and he held it for 21 years,” Siegel wrote in the detailed catalog description for the stamp.

According to Siegel, the 2¢ Missionary stamp is shrouded in a bit of mystery.

“There is a story associated with the early history of this stamp that has been reported as fact by several philatelic authors, but disputed as fiction by others. Prior to Ferrary’s ownership, the stamp is said to have been owned by a Parisian collector named Gaston Leroux,” Siegel said.

“The story continues that Leroux was murdered by an envious philatelic colleague, who coveted the 2c Missionary and later confessed to killing Leroux to obtain it.

“The Missionary earned fame in another murder-mystery story when the motion picture Charade was released [in 1963], casting the fabled Hawaiian stamp in a starring role with Cary Grant and Audrey Hepburn.”

Siegel lists this unique unused Hawaii 2¢ Missionary at the Scott U.S. Specialized catalog value of $625,000. The value is italicized to indicate a stamp that can be difficult to value accurately because it appears infrequently in the philatelic marketplace.

A single catalog has been prepared for the two-day Przybyl sale. Full details of the auction, including a downloadable version of the catalog and online bidding options, are available on the Siegel website.